In all the hype about coconut oil and its magnitude of health benefits in recent years, people seem to have forgotten about olive oil. This ancient Mediterranean food staple is full of healthy fatty acids and antioxidants that have proven to reduce the risk of a number of diseases and conditions. There has been quite a lot of research conducted on the health benefits of olive oil over the years, and it is one of the few fats that are not the subject of fiery debate. In fact, olive oil is a staple in the diets of some of the world’s healthiest people… 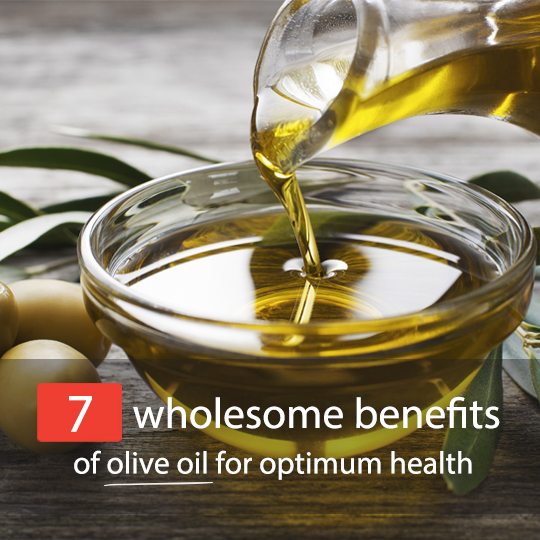 A Brief History Of Olive Oil

This golden oil is the product of olives, which are the fruits grown on olive trees. Olive trees have lifespans of between 300 and 400 years and belong to the Oleaceae family. It is not known for sure where the olive tree originated, but locals in Persia, greater Jordan and the valleys of the Nile each claim it as their own, while others say olive farming began in Crete and the nearby Greek Islands around 5,000 B.C.

Ancient Greeks were so impressed by the olive tree that they attributed it to being a gift from the goddess Athena, using olive oil in their religious rituals. It was named ‘liquid gold’ by Homer, the ‘immortal Greek poet’, and during the 6th and 7th century BC, the cutting down of an olive tree was punishable by death under the Greek Laws of Solon. 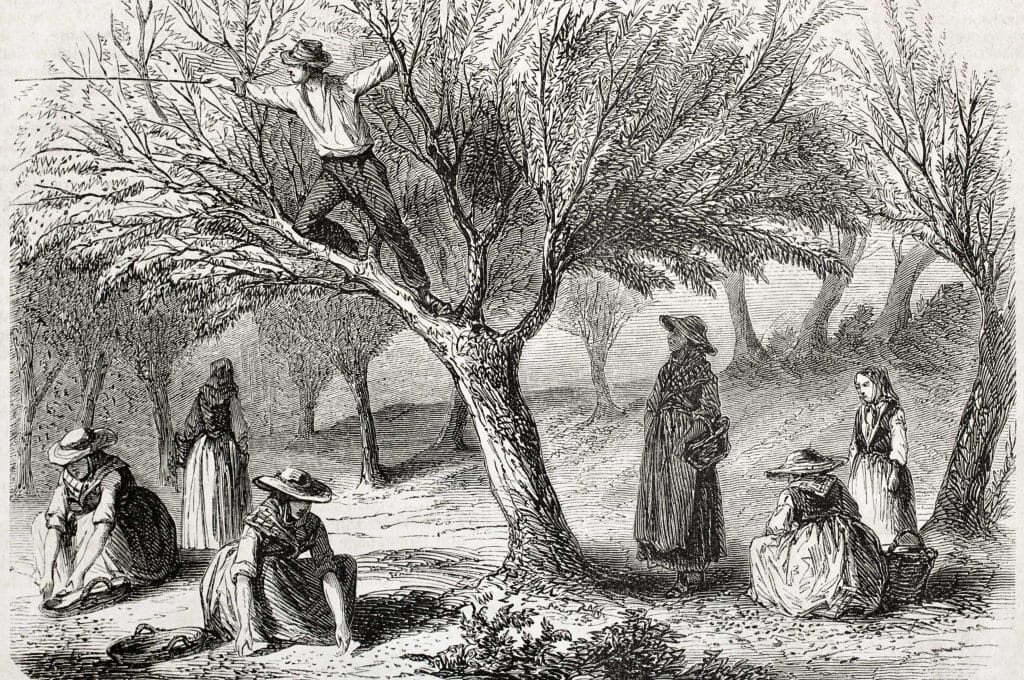 Olive oil was not just a food staple for Mediterranean civilizations – it was also known for its health and beauty benefits even back then. The Romans are believed to have used it as moisturizer on their bodies after bathing to soften and nourish their skin. Olives were finally introduced to the West by Spanish and Portuguese explorers in the 15th and 16th centuries, and groves were planted in California in the late 18th century.

How Olive Oil Is Made 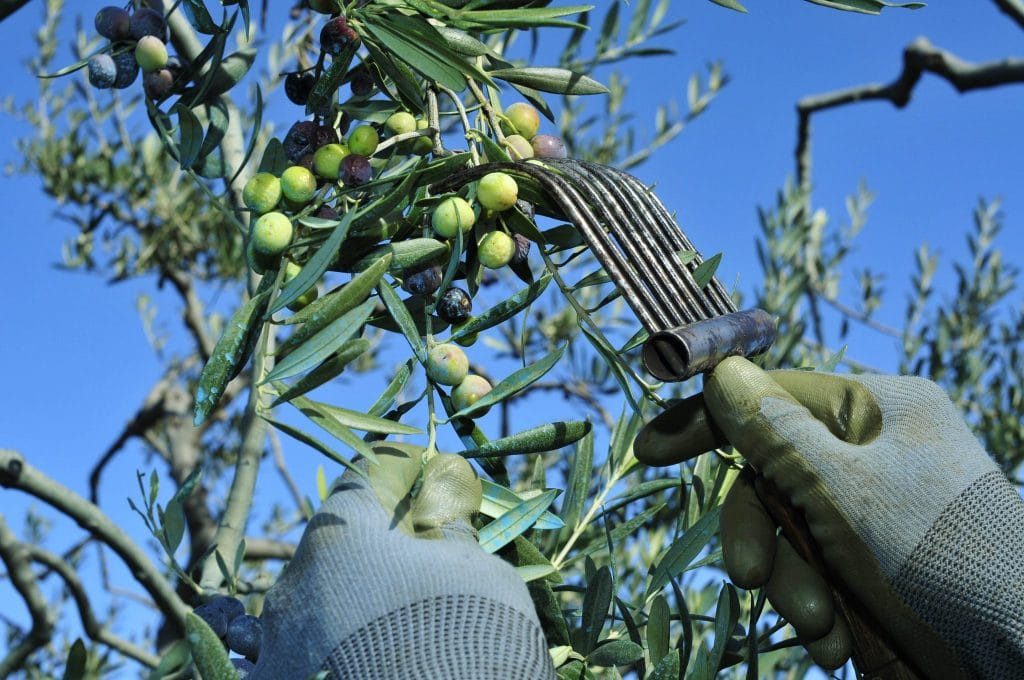 Making olive oil is actually an extremely simple process. It involves pressing the olives so that the oil comes out. Anyone who has experienced traditional olive harvesting, however, would know how laborious and strenuous it is.

Luckily for farmers, the old method of raking the olives out of the tree and then kneeling down to gather them all from the ground has been replaced with a machine that shakes the tree, causing the olives to fall into large nets.

Olive oil has been extensively studied, and the myriad of health benefits have been discovered and proven over a number of years. From lowering the risk of heart disease and total cholesterol to improving insulin level and blood sugar control, it continues to be appreciated – perhaps not as much as it was by the ancient Greeks – but significantly valued all the same… 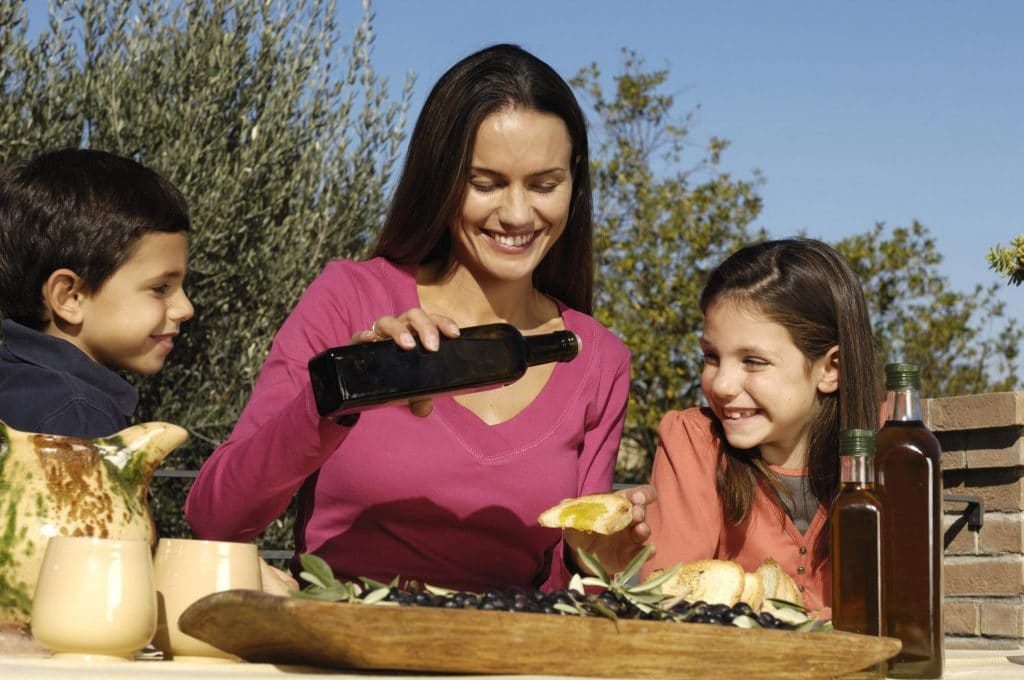 1. Olive Oil Is A Healthy Fat

Monounsaturated fatty acids are the main types of fat found in olive oil, and they are unreservedly considered healthy dietary fats. By increasing the amount of monounsaturated fats in your diet and minimizing saturated and trans fats, you may help lower your risk of heart disease. This is achieved by improving related risk factors like total cholesterol and low-density lipoprotein cholesterol levels. Research suggests monounsaturated fats may regulate blood clotting and improve insulin levels, which is particularly beneficial to people with type 2 diabetes. 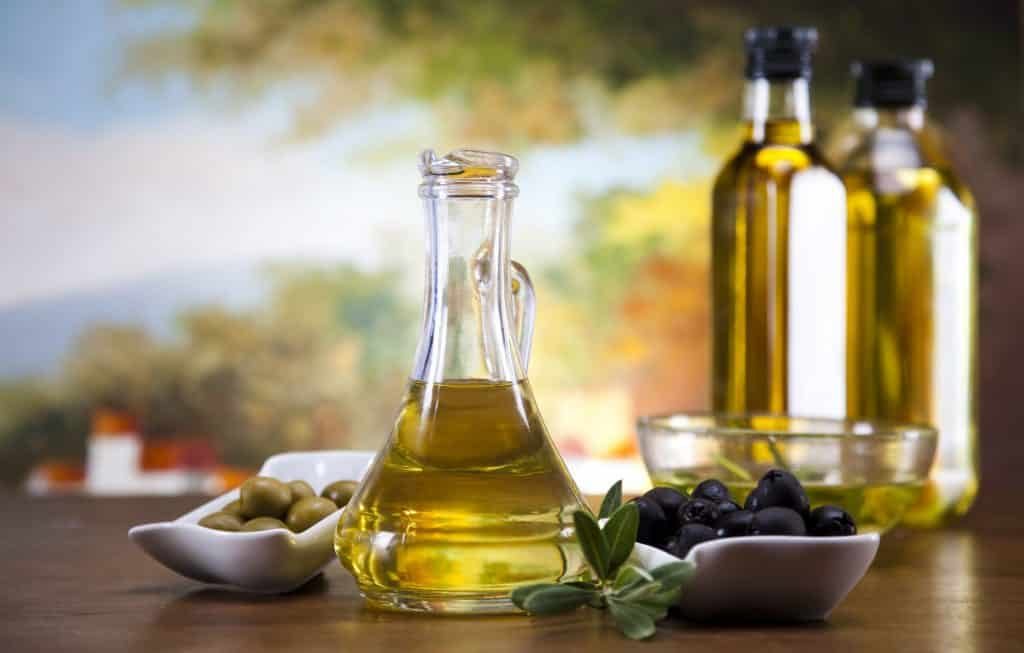 With vitamins E and K and nutritious fatty acids, including Omega-6 and Omega-3, extra virgin olive oil has plenty of nutrients to add to your daily intake. However, with the relatively low quantities of olive oil that you would consume within a day, you could not rely on it alone for those nutrients. On the other hand, it is an incredibly powerful source of antioxidants, which can help fight some serious and topical diseases…

There are a few stand-out antioxidants in extra virgin olive oil, including oleocanthal, which is an anti-inflammatory compound, oleuropein, which is known for its ability to protect LDL cholesterol from oxidation, and hydroxytyrosol, which is a type of phenolic phytochemical that can absorb cell-damaging free radicals. Hydroxytyrosol and oleuropein are the components that give extra virgin olive oil its bitter, pungent taste. They provide powerful active antioxidants both in vivo and in vitro.

Chronic inflammation can affect people with cardiovascular diseases, diabetes, neurodegenerative diseases, cancer and degenerative joint diseases. Notably, people who follow a traditional Mediterranean diet are far less likely to suffer these chronic diseases, and that, according to research, is partially attributed to their high intake of virgin olive oil. 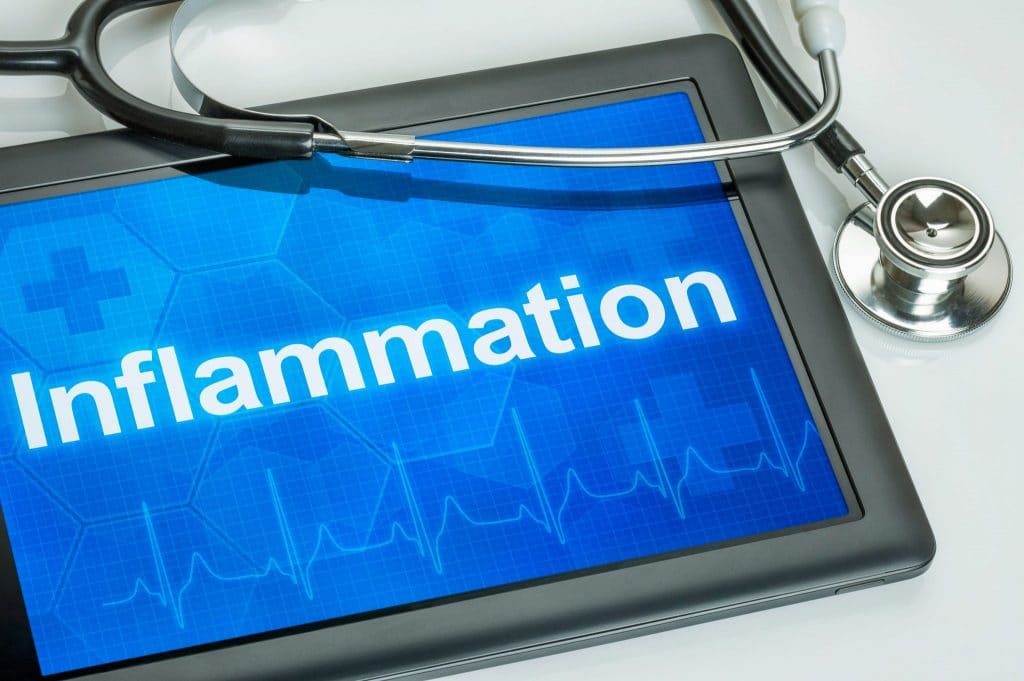 4. Olive Oil May Reduce The Risk Of Heart Disease And Cancer

Because of olive oil’s anti-inflammatory properties, it is believed to reduce the risk of some very serious diseases, including heart disease and cancer. Ecological evidence was discovered in 1979, finding a reduced risk of coronary heart disease and cancer associated with Mediterranean diets, despite the fact that these diets are high in monounsaturated fats. A number of studies have found that food associated with this traditional diet provides all the essential micronutrients and fiber known to protect and promote health for disease prevention. 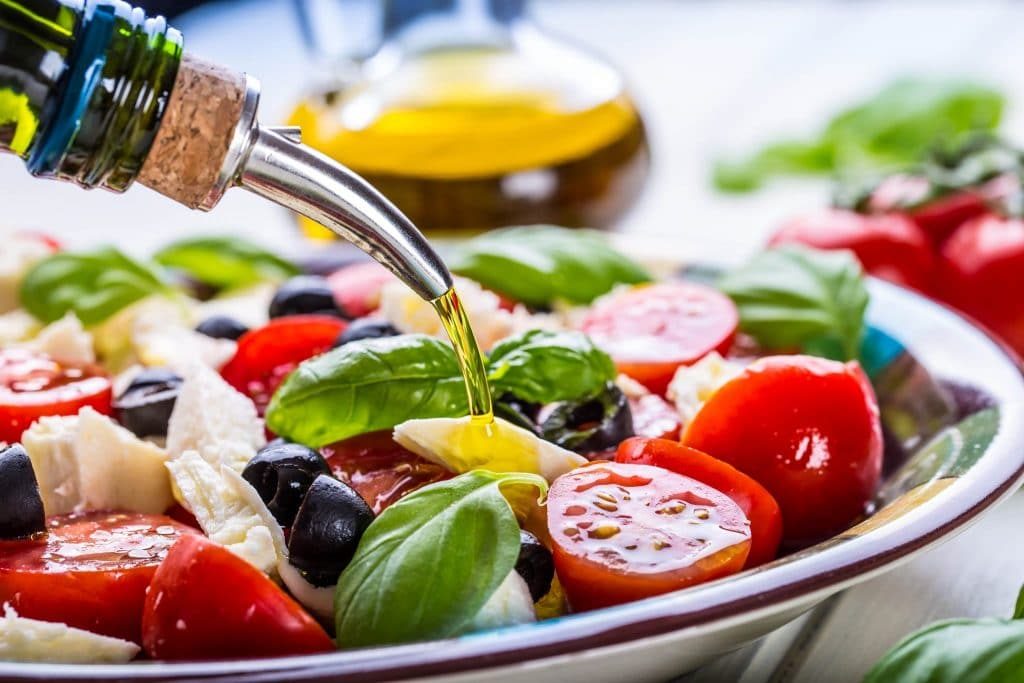 Research over the years has shown that countries around the Mediterranean Sea have far less deaths from heart disease and stroke than other areas of the world (where it is one of the most common causes of death). According to the very conclusive findings of a major clinical trial, which was released in 2013, around 30% of high risk people could prevent heart attacks, strokes or death by heart disease if they switched to a Mediterranean diet. Researchers cited olive oil, nuts, beans, vegetables, fruits and fish as the staple to heart health.

There are several more studies that decisively conclude that olive oil has major benefits for heart health. Exclusive use of olive oil was associated with a significantly reduced chance of coronary heart disease and acute coronary syndrome (up to 47% reduced chance) in one US study. 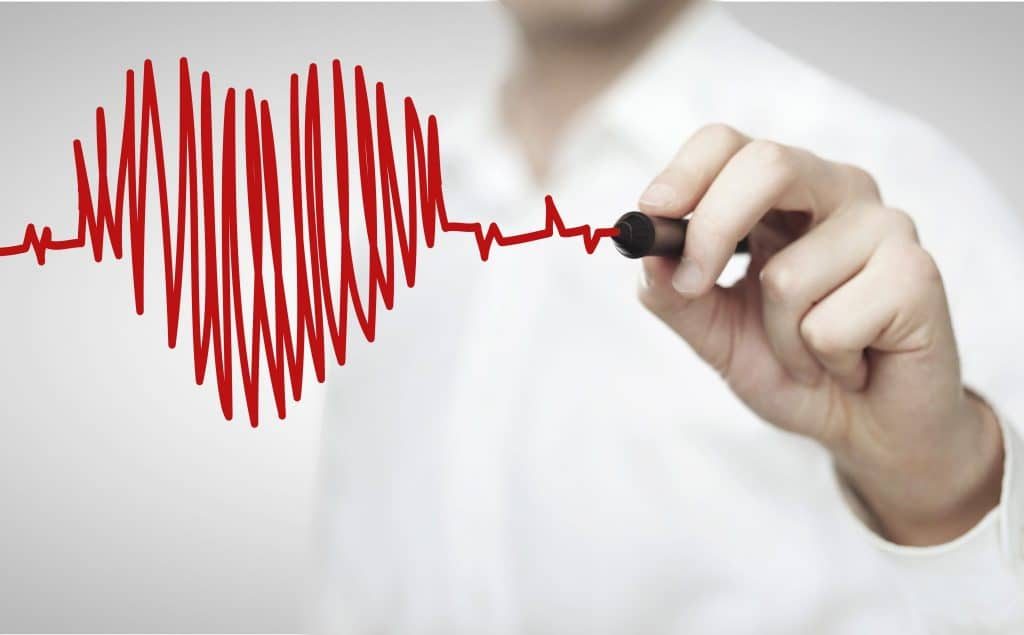 Alzheimer’s involves a buildup of beta amyloid outbreaks, which are protein tangles, in certain neurons in the brain. It is the most common neurodegenerative disease in the world, and the leading cause of dementia. A study from the University of Navarra found that people who ate a traditional Mediterranean diet, with olive oil as a staple, had a reduced risk of cognitive impairment.

7. Olive Oil Has Health Benefits For Skin And Hair

As well as improving the insides of our bodies, olive oil can improve the health of our outer layers, both by consuming it, and by applying it to skin and hair. The vitamin E in the replenishing oil has a moisturizing effect, especially on dry skin, meaning it can be used on its own as a moisturizing oil, or as an ingredient in homemade moisturizer recipes. Skin is exposed to a vast array of environmental chemical and physical agents, including ultraviolet light, which can cause oxidative stress. This can result in a number of short and long-term effects, including erythema, edema and wrinkles. The vitamin E in olive oil is a naturally occurring lipid-soluble non-enzymatic antioxidant, which protects skin from these adverse effects. This powerful nutrient can also improve skin by treating a number of conditions, including inflammation and acne. 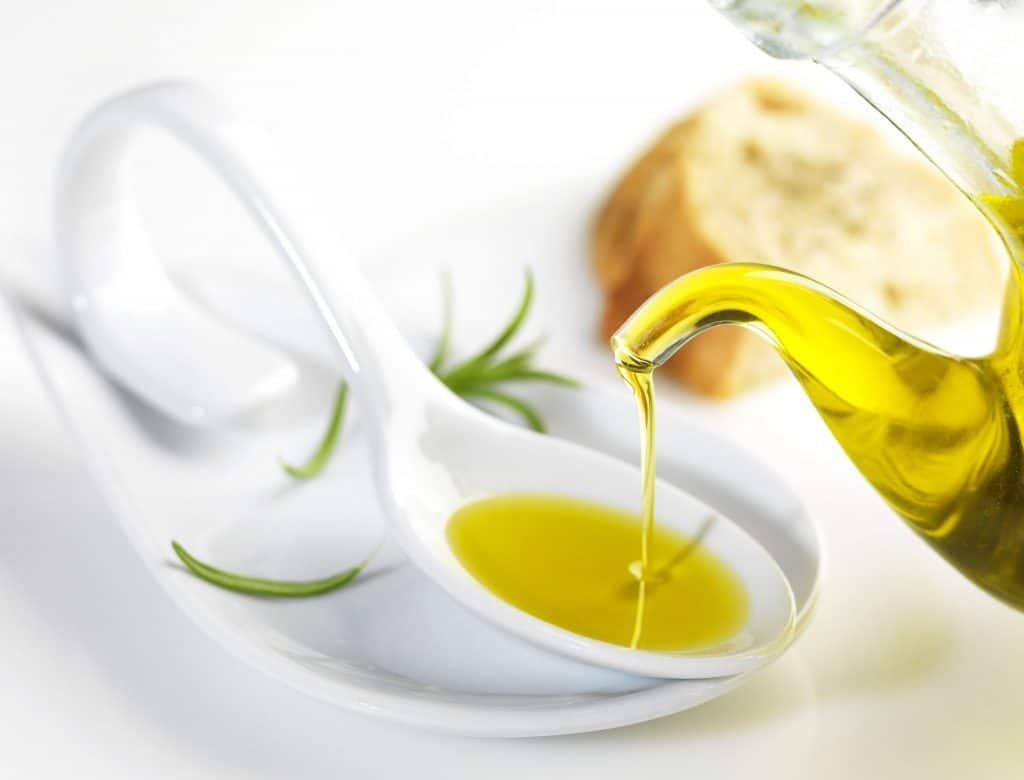 Olive oil may also be attributed to healthier hair, and can potentially reduce hair loss. Good nutrition is one of the main preventative measures for hair loss in both men and women, and the essential vitamins and nutrients in olive oil, can strengthen hair. By consuming healthy oils, such as olive oil or coconut oil, you may be able to reduce symptoms of alopecia and pattern baldness.

Too Much Of A Good Thing

Although olive oil is a healthy fat, it is extremely high in calories and there are potential risks with consuming too much of it. Like all calorie-rich foods and ingredients, olive oil should be eaten in moderation. You can simply reduce the amount of olive oil you cook with, or minimize your intake of olive oil in salad dressings and dips. It’s simply a matter of being aware of how much of everything you are consuming, because above all else, you want to make sure that you’re eating a balanced diet, rich in vegetables, with an appropriate amount of protein, healthy fats and complex carbohydrates. 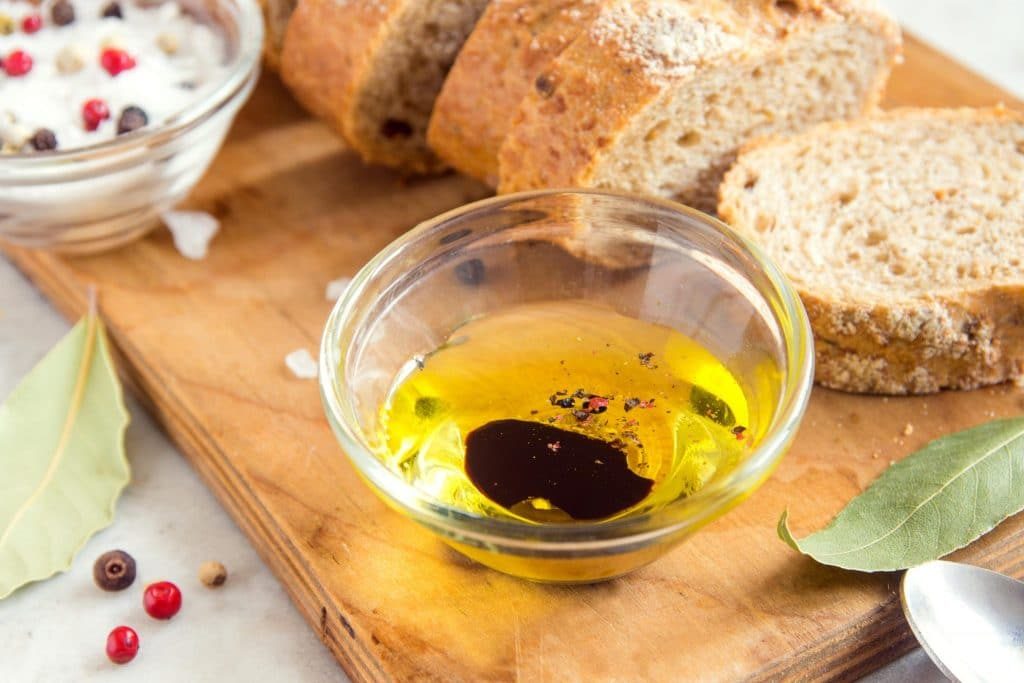 Does Olive Oil Lose Its Health Benefits When Heated?

There is some debate around whether olive oil has the same health benefits when heated to a certain temperature. During the cooking process, fatty acids can react with oxygen and become damaged. However, unlike a number of other oils, olive oil is quite resistant to high heat. One study found that heating extra virgin olive oil to 180 degrees Celsius for 36 hours did not cause much damage to it, meaning it is a safe oil to use – even when cooking at high temperatures. 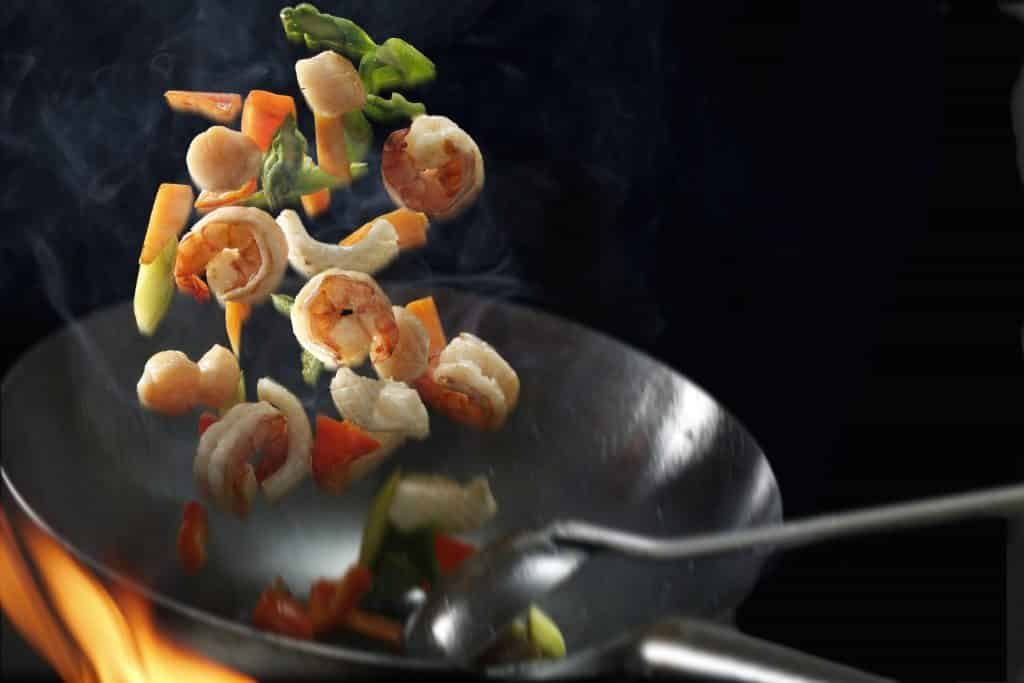 There are some delicious and creative ways to use olive oil, other than simply as a bread dip or the base oil in a stir fry. It can be used in salad dressings, marinades and sauces, as well as being a fantastic alternative to butter when baking anything from pancakes to brownies…

Savory Kale Oatmeal With A Poached Egg And Green Onion – This is a great example of how olive oil can be used as a finishing touch to add a beautiful flavor to just about any meal! It works particularly well drizzled on poached eggs, and can also be used to add moisture to a dry meal. 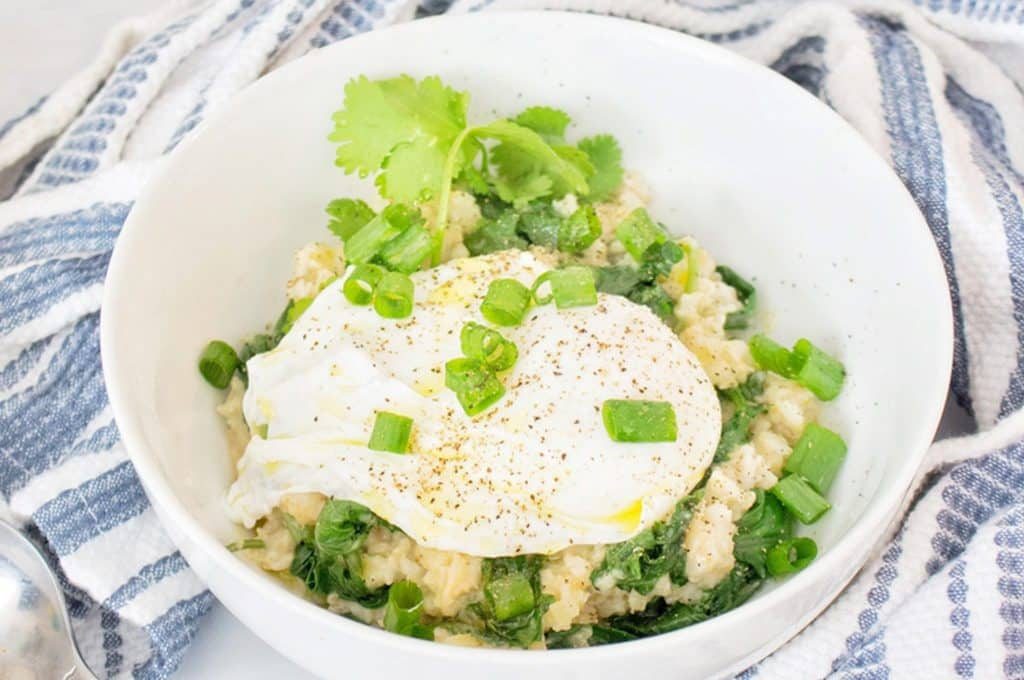 Honey Mustard Ginger Salad Dressing – Salads can be so boring without a burst of flavor from your favorite dressing. The problem though is that so many pre-made dressings and sauces are full of sugar and other unnatural or unhealthy ingredients. The solution? Make your own dressings! This mustard and extra virgin olive oil-based option is super simple to whip up and can stay in the fridge for a few days to jazz up just about any salad. It is bursting with sweet, tangy and pungent flavors for the ultimate salad shake-up!

Olive Oil Blondies With Chocolate Frosting – Want something more casual than cake that will stay nice and moist (and fudgey!) in the fridge? These tasty blondies use a big dose of olive oil instead of butter or margarine in the batter, which creates a different taste than traditional cakes, and it also keeps it moist. 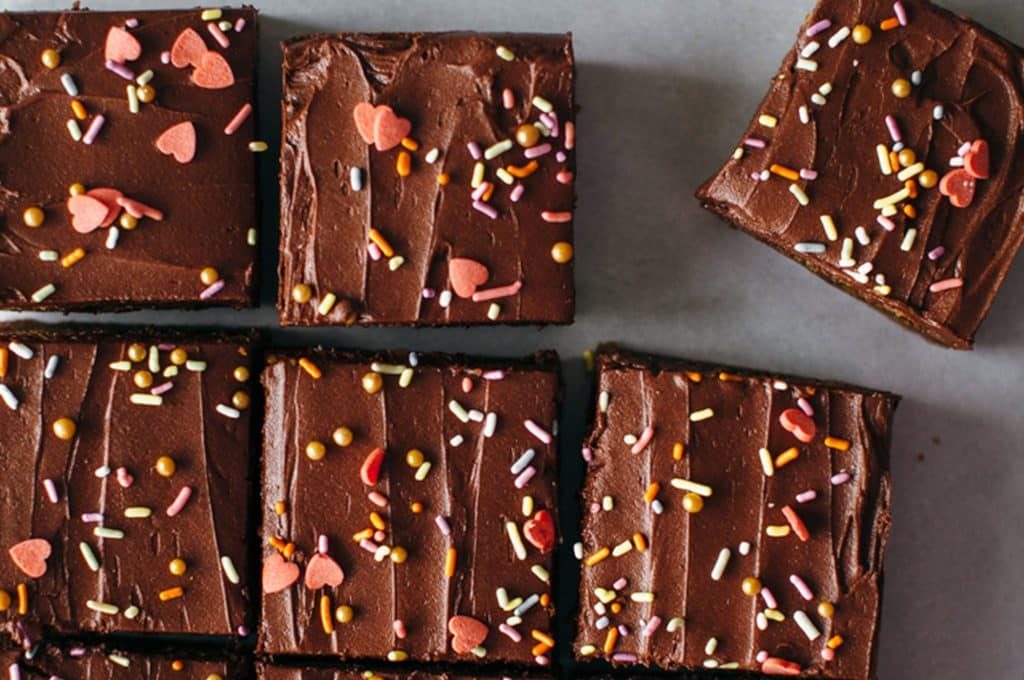 Cilantro Chimichurri Sauce – This olive oil-based sauce offers a twist on traditional Argentinian chimichurri, which usually features parsley as the main ingredient. This cilantro version gives it a fresh, herbal flavor, with a nice kick from the red pepper flakes and red wine vinegar. It works well as a zesty taco topping or marinade, and is quick and simple to prepare.

Cayenne pepper is more than a spice you add to your favorite dish if you want to give it a bit of a kick. It contains incredible medicinal properties...