Lately, it seems like everyone is talking about the benefits of probiotics. You know, the good bacteria that help keep our digestive tract healthy, support a strong immune system and benefit nearly every function in the human body. Supplement companies are paying big bucks to advertise their probiotics on television commercials and magazine print ads. Yogurt companies are bragging about their products that contain “live cultures.” The living bacteria and yeast that we refer to as probiotics are everywhere. But what about prebiotics? 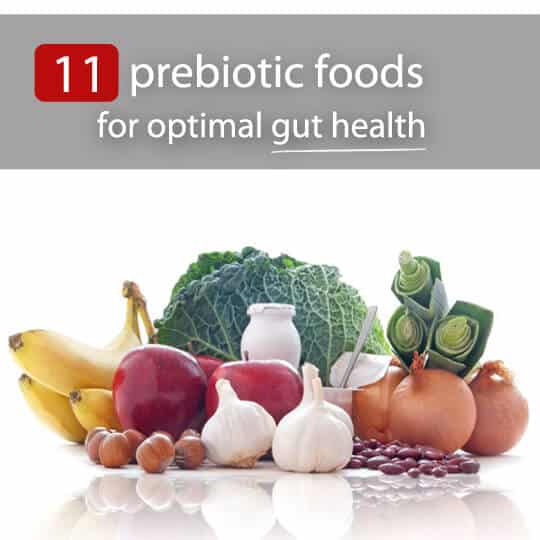 While they aren’t talked about nearly as much, prebiotics are just as important for our overall health. Unlike probiotics, prebiotics are not alive. Rather, they are a non-digestible form of fiber. This type of fiber acts as food (or fertilizer) for probiotics. This is extremely important because if your beneficial bacteria didn’t have anything to feed off, they would be easily destroyed by your body’s bad bacteria.

In order for your body to function properly, doctors say you should have about 80% good bacteria and 20% bad bacteria. When the bad guys take over, though, health suffers. As a result, you may experience frequent colds, autoimmune disease, chronic fatigue, depression, anxiety, food allergies, digestive issues, weight fluctuations, thyroid disease, skin conditions, and more. So, as you can see, it’s very important to give your body its daily dose of needed prebiotics.

There are only two ways you can introduce prebiotics into your body — through supplements or the food you eat. There are a number of nourishing foods that are rich in prebiotics. Below are 11 of the top prebiotic foods for optimal gut health. Chances are, you are already eating some of these prebiotic foods and didn’t even know their health benefit.

Chicory root belongs to the same family as sunflowers and daisies. It’s also considered a cousin to lettuce and dandelions. While the plant is often used in salads, it’s also commonly used to make coffee. Since chicory root tastes similar to the popular morning beverage, but doesn’t have any caffeine, some people like to grind it up and add it to boiling water. This process leaves you with chicory root “coffee.”

Chicory root has been used for its medicinal purposes for centuries. Ancient Egyptians and Ancient Romans consumed the herb in large amounts because they believed it could purify the blood and support liver health. That’s because it’s loaded with key vitamins, minerals, and antioxidants. Today, we know chicory root as one of the most powerful prebiotic foods out there. It contains a prebiotic called Inulin, which is vital to immunity and digestive health. While other plants also contain this prebiotic, chicory root touts the highest concentration. 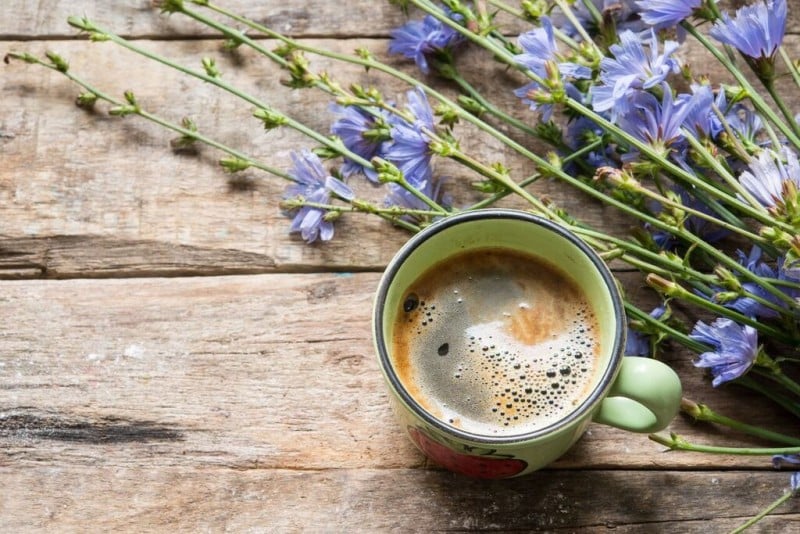 Along with boosting immunity and improving digestion, inulin has been known to protect heart health, bone health, and aid weight loss. In one study, a group of 48 overweight adults were given either 21 grams of inulin or a placebo every day. After 12 weeks, researchers found the group who ingested the inulin experienced a decrease in hunger and lost weight.

While you can eat Jerusalem artichokes raw or cooked, if you’re looking for the best source of prebiotics, you’re encouraged to eat them raw. Inulin’s content is altered by cooking due to high heat. 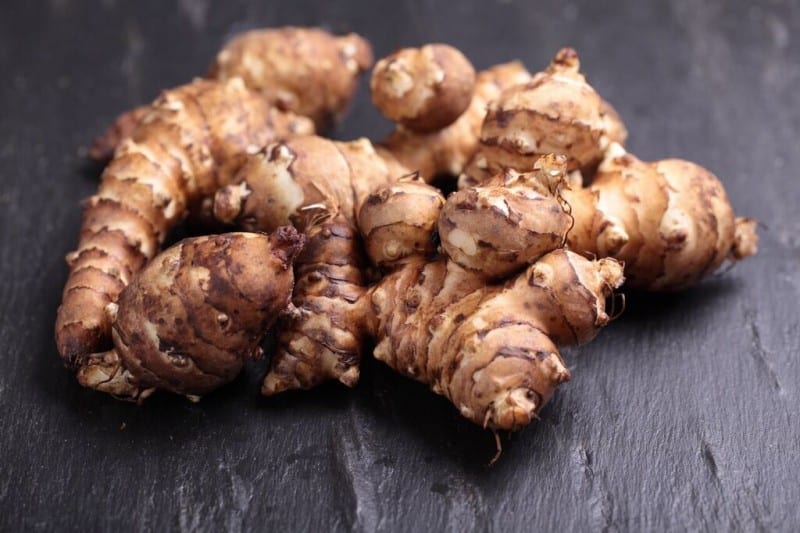 Dandelions aren’t just pretty flowers in your garden or field … they’re also edible. You can add dandelion greens to tea, soups, salads, and sandwiches. While all parts of the flower are nutritious, dandelion greens are rich in vitamins A, K, potassium, calcium, iron, and the prebiotic inulin. In fact, dandelion greens are 24.3 percent fiber by weight. That means they’re one of the best prebiotic foods you can consume. 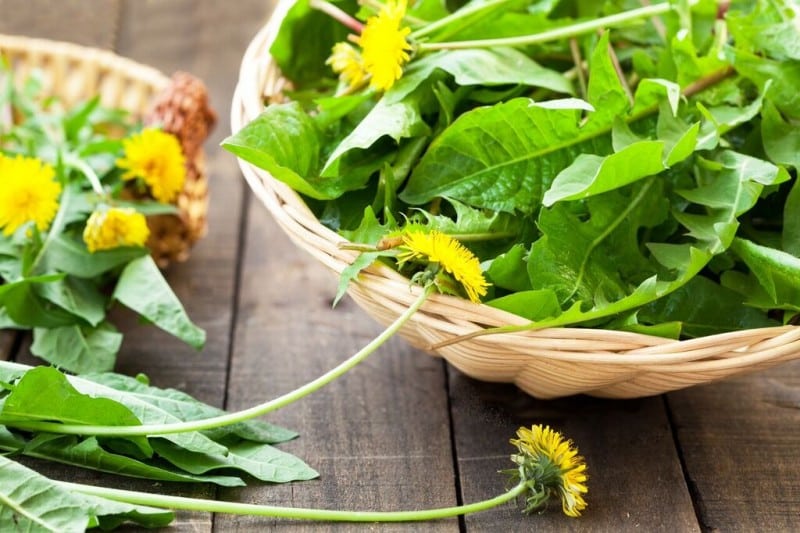 Garlic is not only the perfect flavor enhancer for your Italian food, but it’s also loaded with good-for-you nutrients that have a major impact on the body. Garlic is a bulbous root that has been known to lower high blood pressure, fight cancer, boost immunity, and fight inflammation. It has antiviral and antifungal properties. Of course, those are just a few of garlic’s many health benefits. Since it’s also a prebiotic food, garlic plays a large role in diversifying our gut microbiome. Researchers say, as a general rule of thumb, the more diverse our gut bacteria is, the healthier we are!

When shopping for garlic in your local grocery store, you will notice it comes in many forms — minced, powder, flakes, or paste. If you want to reap the biggest benefits, though, doctors say to reach for fresh garlic.  Additionally, while cooked garlic still has nutritional value, it’s best to eat it raw. 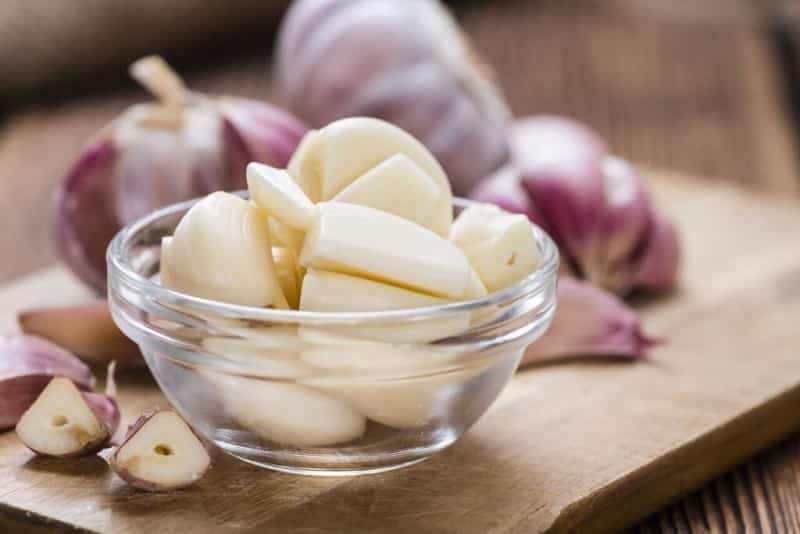 The leek is a popular plant related to onions, garlic, and shallots. Being from the same family as some powerhouse veggies, it’s no wonder leeks pack a powerful nutritional punch. Along with having antibacterial, antiviral, and anti-fungal properties, leeks have proven to work well as both a diuretic and a laxative. Plus, they contain cancer-fighting properties and support heart health. The health benefits don’t end there, though. With 11.7 perfect of fiber by weight, leeks are considered a powerful prebiotic food. It’s important to note that not all high-fiber foods are considered prebiotic foods. Rather, prebiotics are a certain type of fiber. 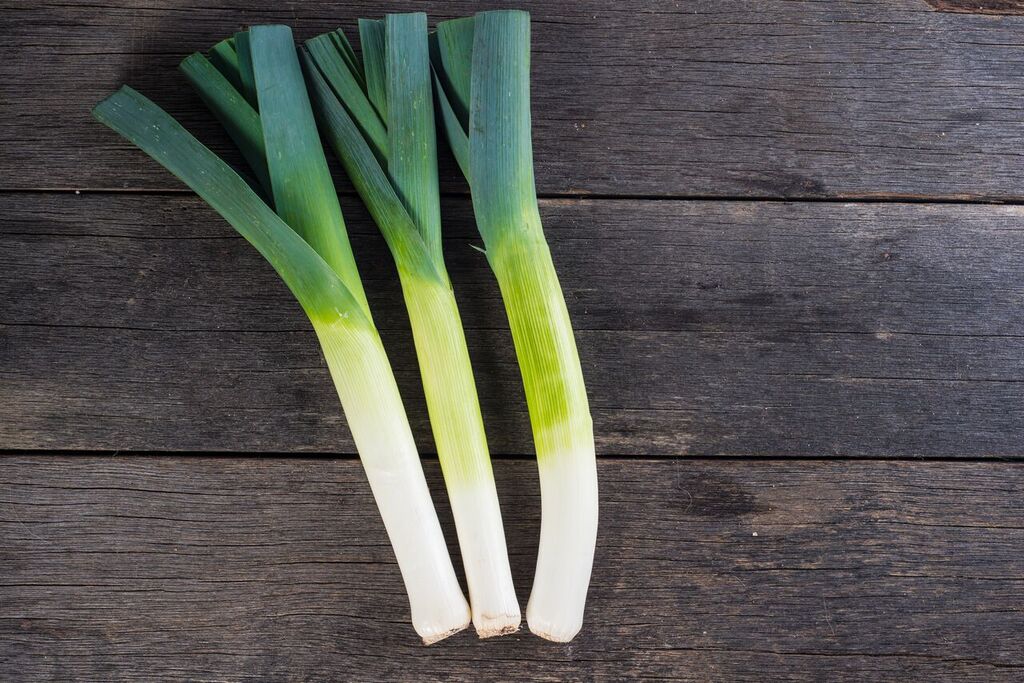 According to Dr. Joseph Mercola, 87 percent of Americans say they like onions. That’s a very good thing since onions are one of the healthiest foods you can eat! In both raw and cooked forms, onions are a great source of inulin (prebiotics). As you can see from the bold percentages above, though, there is slightly more prebiotic fiber in raw onions, making them a better option. Additionally, certain cancer-fighting compounds and immune boosting nutrients are destroyed when onions are cooked.

Overall, onions are rich in prebiotics, sulphuric compounds, flavonoids, polyphenols, and vitamin C. So what does all of this mean? Well, these nutrients help onions: 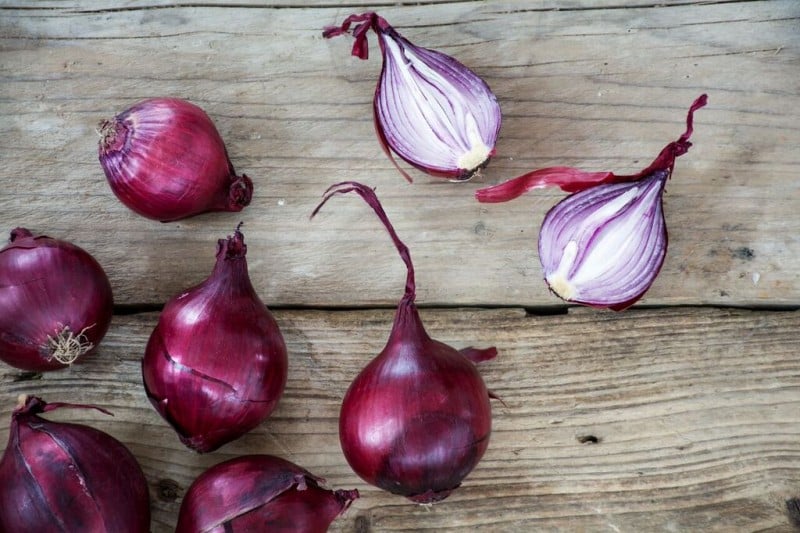 To add more raw onions to your diet, try dicing them up and adding them to salads, sandwiches and tuna salad.

Asparagus is another super veggie that’s rich in nutrients such as folic acid, vitamins A, B, C, K, potassium, protein, and inulin (prebiotics). Given its high nutrient content, asparagus has been known to nourish the digestive tract, fight inflammation, fight cancer, lower risk of type 2 diabetes, serve as a natural diuretic, and increase nutrient absorption.

The health benefits of asparagus were known early on. In fact, when it was first cultivated about 2,500 years ago in Greece, asparagus was used as a natural medicine.

If you’re looking to introduce more asparagus into your diet, it’s great cooked in a pan, roasted, or grilled. Eat it as a side dish, incorporate it into salads, or much on it as a delicious snack. 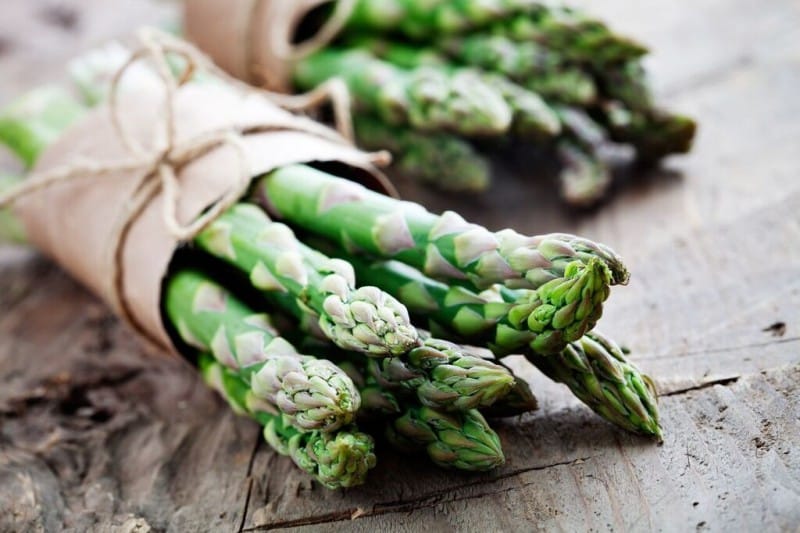 You’ve probably heard the name “wheat bran” plenty of times from popular cereal and bread commercials. It’s also often added to baked goods and soups. While people who suffer from Celiac disease or gluten intolerance should stay clear of wheat bran, it does have a place in a healthy diet. With 5 percent fiber by weight, raw wheat bran is considered a great prebiotic food. Like the other foods on this list, it contains beneficial inulin.

Along with prebiotics, wheat bran is a good source of vitamin B, dietary fiber, iron, magnesium, potassium, zinc, manganese, copper, and selenium. Those are all key vitamins and minerals the body needs to function properly. A few health benefits of eating wheat bran include: 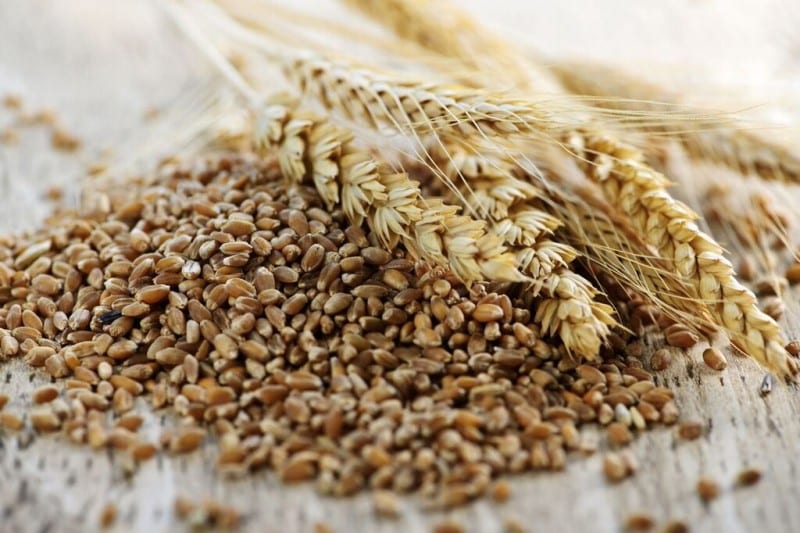 While some people argue that bananas contain a relatively high amount of sugar, they are extremely nutritious. Not only do they contain gut-beneficial prebiotics, but they are also loaded with important vitamins and minerals.

Bananas are rich in potassium, making them an athletes best friend. Eat a banana before your workout to boost energy or after your workout to repair muscles and balance water retention.

Additionally, if you’re trying to ditch a few extra pesky pounds, try adding bananas to your diet. Since they’re loaded with fiber, they’re extremely filling. That means you shouldn’t feel the need to reach for a high-calorie snack.
If you’re looking to add bananas to your diet for their prebiotic benefits, look for ones that aren’t fully ripe yet. Rather, grab a bunch that are still a bit greenish and don’t have any brown spots. Once you’ve picked out the perfect bunch, you can simply peel and munch or add one to your morning smoothie. 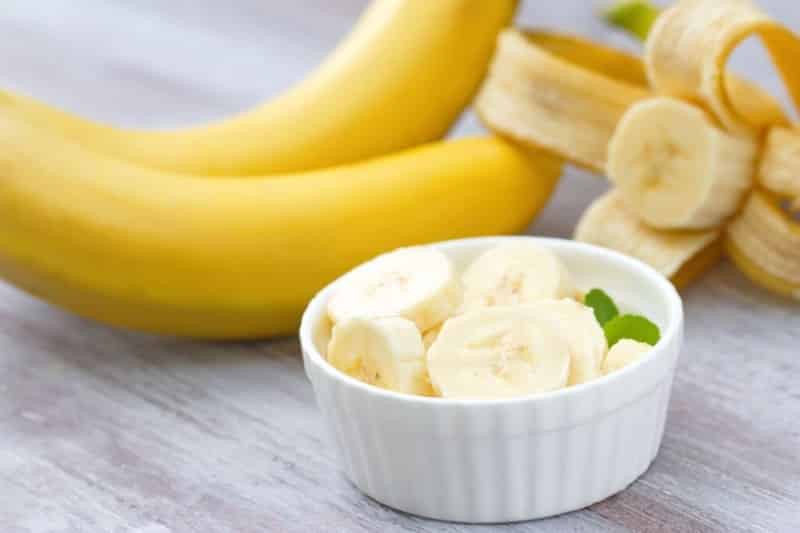 Avocados are one of the most nutrient-dense fruits on earth. For that reason, they’re often referred to as a “superfood.” They contain a long list of vitamins, minerals, and antioxidants. They are most well-known for their high protein, healthy fats, and fiber content. Of course, we can’t forget prebiotics. Avocados are yet another food that contain beneficial prebiotic fiber.

Studies have found avocados are amazing for health. They are known to: 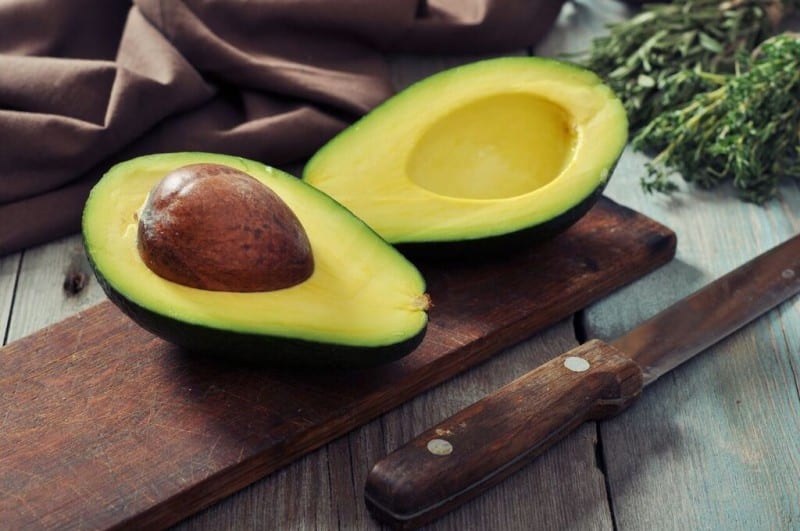 Today, scientists have confirmed much of what ancient health enthusiasts already knew — kiwi has amazing medicinal properties. Along with extremely high levels of Vitamin B6, C, K, A, and a long list of minerals, kiwi is rich in prebiotics. Thanks to their nutritional content, kiwis have been known to: 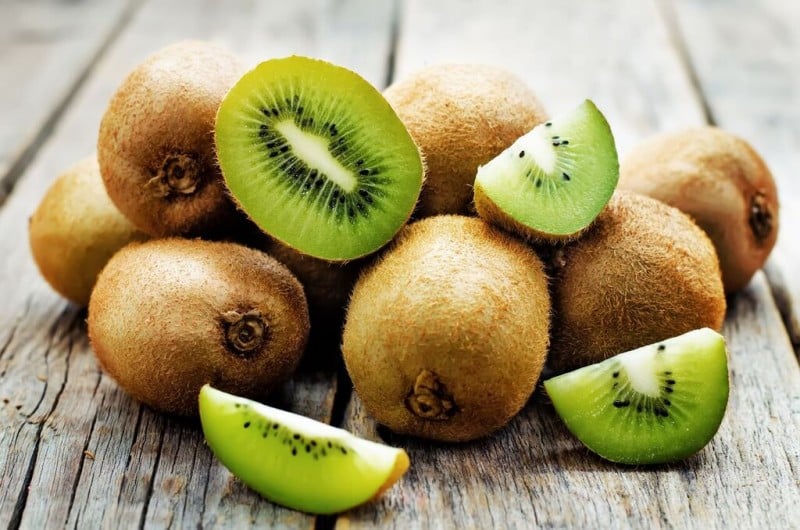 Throughout this article, I’ve encouraged you to eat these prebiotic foods raw whenever possible. That’s because eating your veggies raw can help preserve certain nutrients, such as prebiotics. Heating any vegetable changes its composition in one way or another.

If you don’t like raw veggies, it’s still better to cook them than to ditch them completely. To preserve as many nutrients as possible don’t overcook. Also, avoid cooking your vegetables on extremely high heat. Steaming is always a preferable option.