‘You MUST eat heavy in the morning.’

‘Breakfast is the most important meal of the day!’

I cringe whenever I hear people say that! I mean, what if you’re not hungry? Should you force yourself to eat?!? What happened to listening to your body and eating when you need to? Okay, I should stop ranting. [Deep breath]

It’s (partly) because of black and white statements like these that we tune out with our bodies. And end up eating breakfast foods that are so unhealthy that we would have been better off not eating anything at all in the first place.

Now, don’t get me wrong. I am not saying that you shouldn’t eat in the morning. But that, should you choose to do so, make sure to avoid the following breakfast foods like the plague. 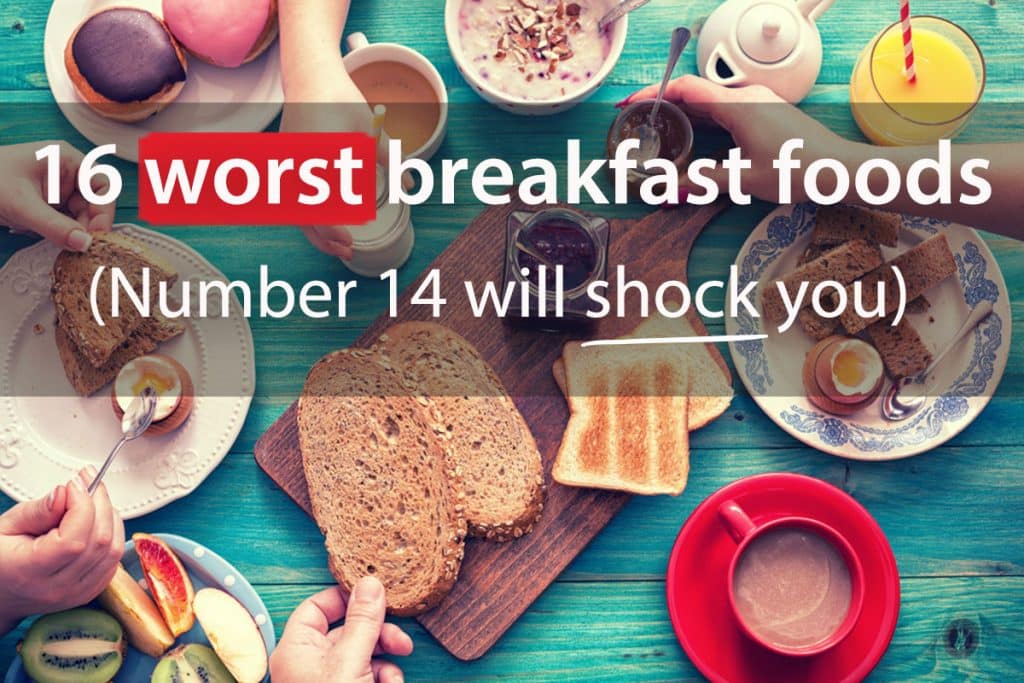 Don’t shoot the messenger but you’d get more nutrients if you ate the box in which corn flakes came in… (Disclaimer: Please don’t eat the box. Have some sweet potatoes instead!)

Although the concept is totally weird, that’s not the reason why corn flakes are unhealthy.

What lurks in your corn flakes? 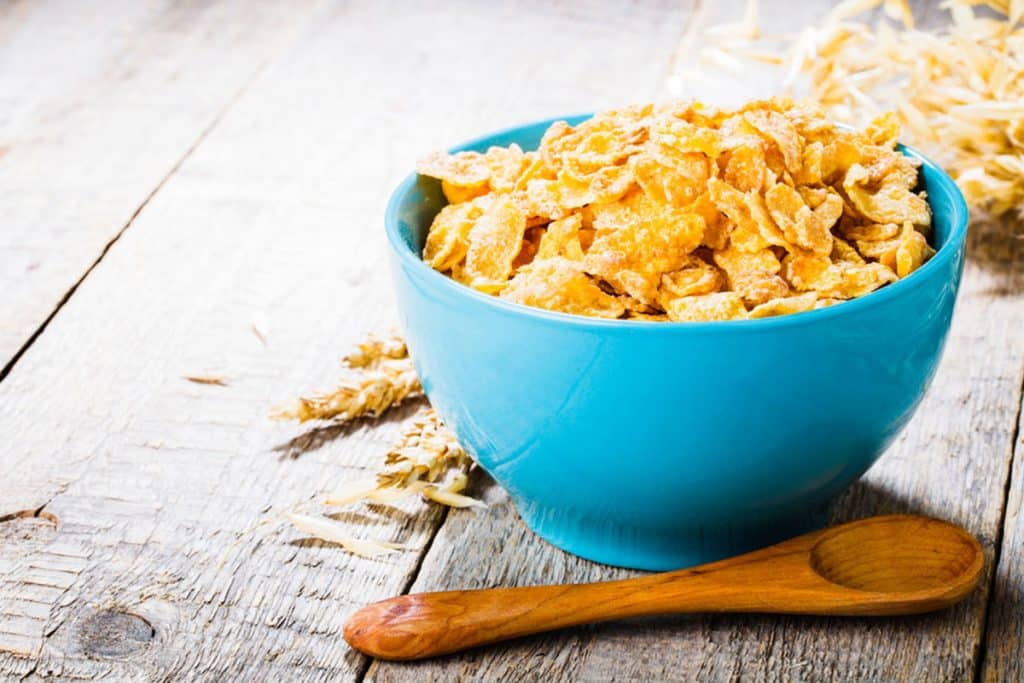 What do cookies have in common with cheerios, frosted flakes and lucky charms?

According to the EWG, a single serving of these cereals contains as much sugar as 3 chocolate chip cookies!

I get it. The boxes are made to look appealing to kids. The cartoon mascots on most of these boxes promise a day full of fun and delight. But that’s a deceptive picture: what these cereals really promise is a bunch of hyperactive kids who just can’t concentrate in class.

What lurks in most breakfast cereals?

Moreover, lectins could also damage the gut lining and cause the gut to become ‘leaky’. A leaky gut allows substances in the gut (such as undigested food particles, bacteria, toxins and so on) to move freely into the bloodstream. This can elicit an immune response and eventually lead to a full-blown immune response.

Soaking, fermenting and proper cooking can partially reduce the amount of lectins present in grains. But as you might have guessed, this process is lengthy and ‘has no place’ in the food manufacturing industry.

In other words, breakfast foods are most likely rich in lectins and can spell trouble for your immune system. 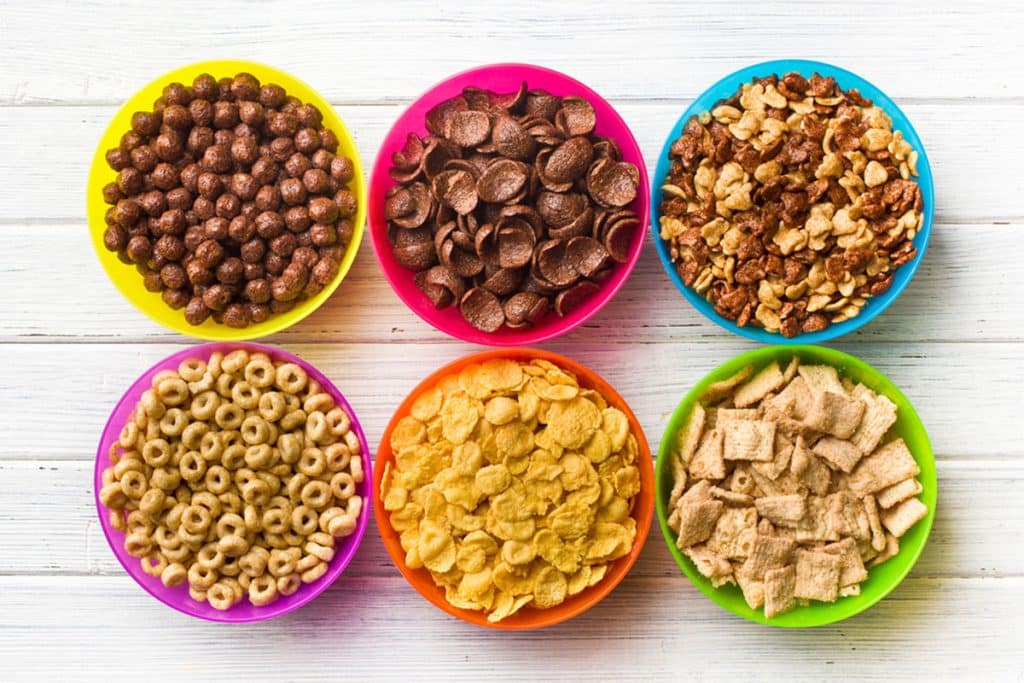 Moreover, most breakfast cereals are produced using an extrusion process that treats the grains with very high heat and pressure. This process not only damages most nutrients in the grains but can also cause an insulin shock that can lead to a dysfunction of the pancreas, liver and kidneys and degeneration of the spinal nerves.

The following video briefly explains the extrusion process and its adverse health effects.

3. Sandwiches and toasts with margarine

This is probably a shocker. After all, aren’t sandwiches or toasts with margarine low in sugar and ‘artery-clogging’ saturated fats?

Well, in the nutrition world, nothing is black and white.

What lurks in your bread and margarine?

Your blood sugar levels will surge.

Not only are you more likely to be hungry again in no time, but frequent large increases in blood sugar levels increase the risks of various health complications such as heart disease.

Numerous research indicate that gluten could cause a staggering number of health issues such as:

– Ataxia (a group of disorders that affect coordination, balance, and speech) 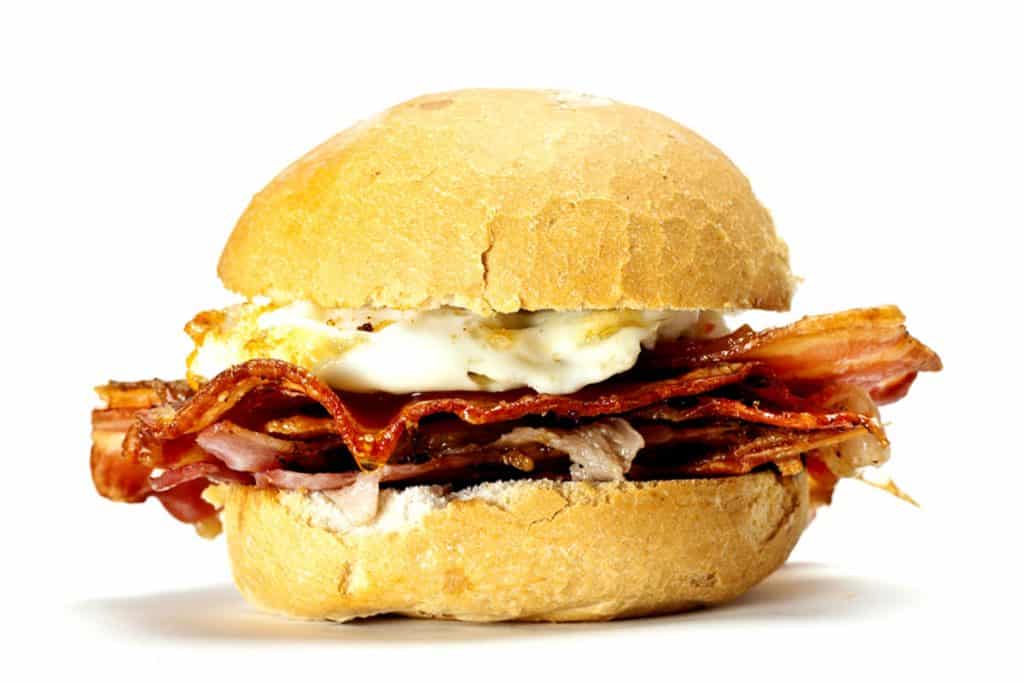 – Inflammation – this can increase the risks of obesity, heart disease, and diabetes

– Skin conditions such as dermatitis

Moreover, RoundUp  has been found to damage the DNA of exposed individuals. Put simply, it increases your risks of cancer.

Margarine is made from vegetable oil, right? How do you think this oil, a liquid, became a (soft) solid?

Simple: through a process known as hydrogenation which transforms the structure of the fat in the oil into a trans fat. And yes, these are the fats that increases the risks of obesity, heart disease, diabetes and many more other health issues.

It is true that margarine does not contain saturated fats (which aren’t all unhealthy by the way). But it contains fats that are even worse for your health. 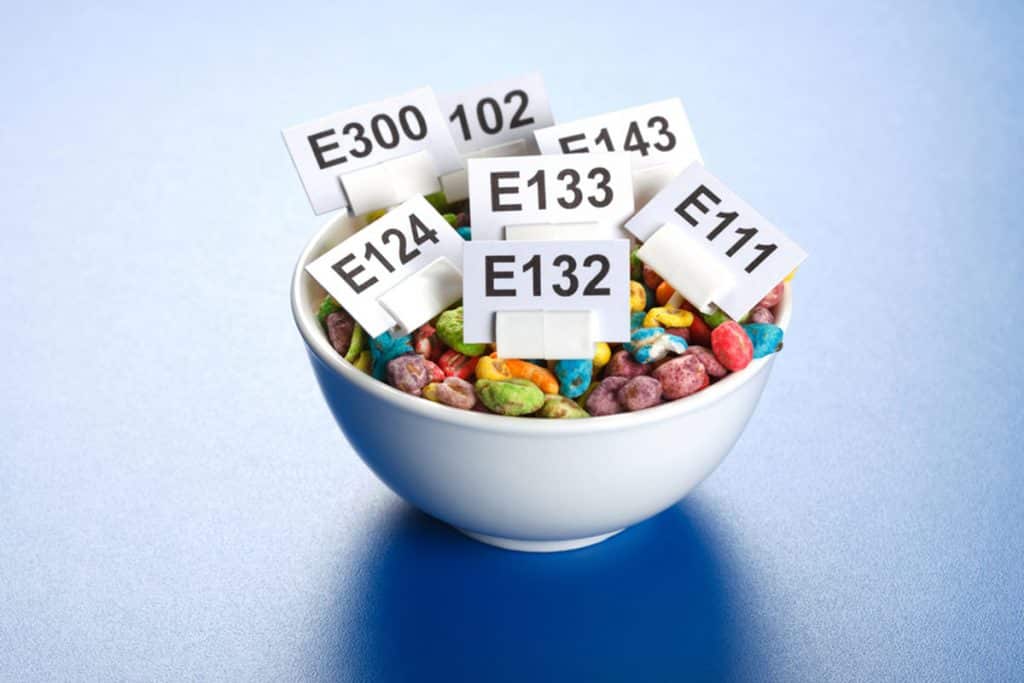 If breakfast cereals are no good partly because of the gluten they contain, then gluten-free breakfast foods should be a healthy alternative, right?

Well, it depends. If you’re talking about having an avocado with an egg and a banana (all these foods are naturally gluten-free), then yes, that’s a nutrient-packed breakfast. (And you should give yourself a pat on the back.)

5. Pancakes and waffles with syrup

You’re probably starting to hate me right now but these breakfast foods are definitely bad news for your health.

What lurks in pancakes, waffles, and syrup?

Plus, most pancakes and waffles are made using wheat flour. In other words, these breakfast foods contain gluten and a nice dose of herbicides.

Think I’m being over-dramatic? Check out the evidence-based facts about high fructose corn syrup before you make up your mind. 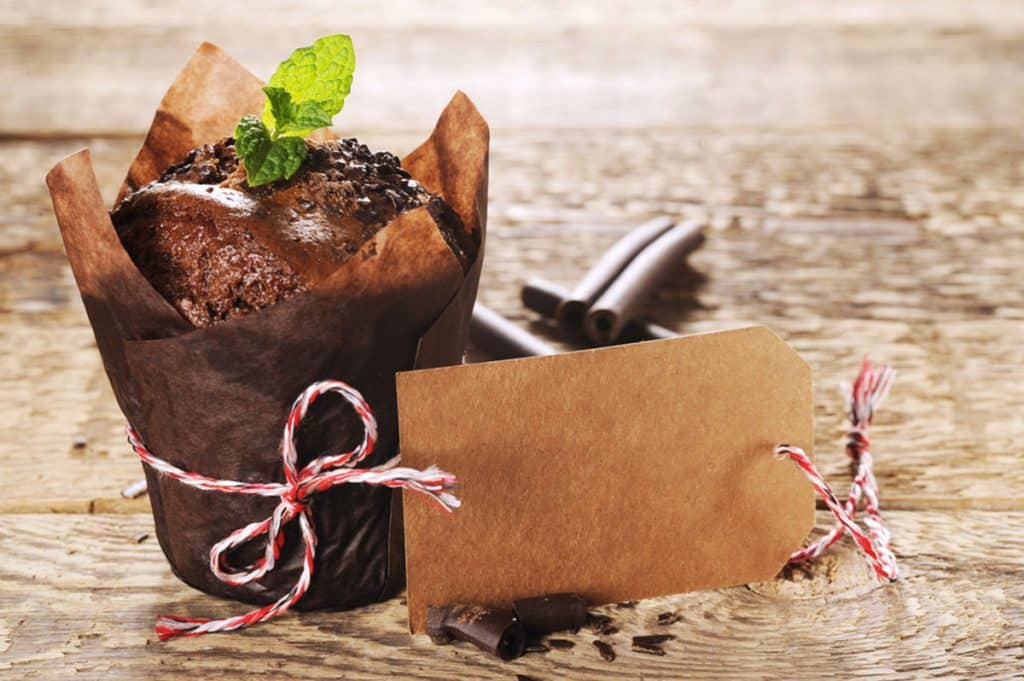 6. Muffins, doughnuts, croissants and other pastries

Okay, nobody (I hope) considers pastries as healthy breakfast foods. But muffins?

Sure, muffins are delicious. But most store-bought muffins are nothing but small (addictive) sugar bombs.

What lurks in muffins and pastries? 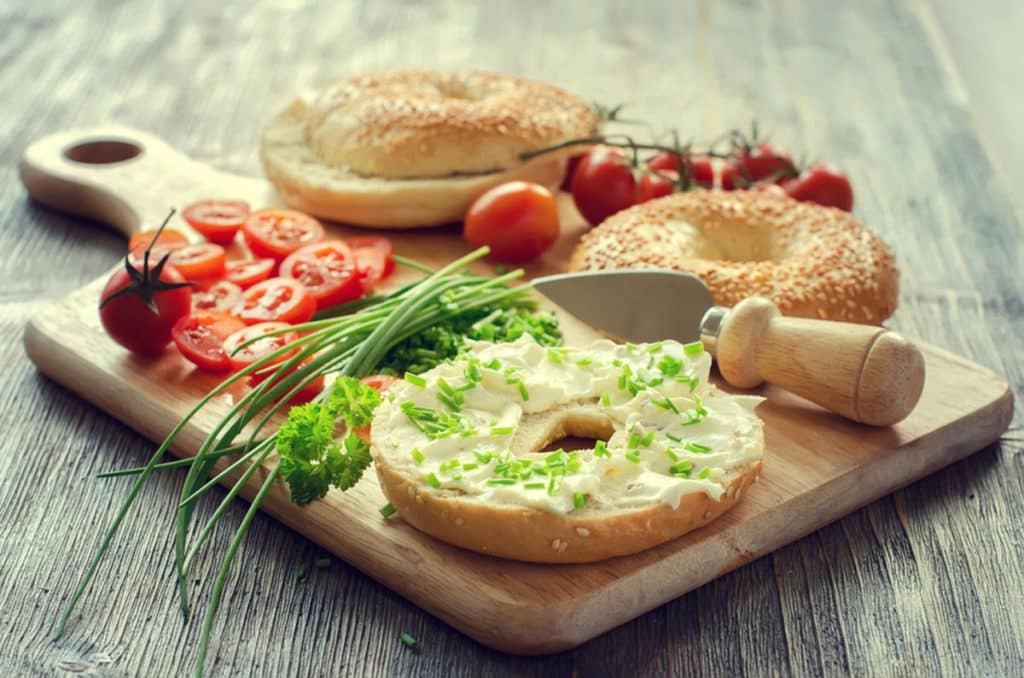 I rarely talk about calories with my patients (except if they have HPA-axis dysfunction a.k.a ‘adrenal fatigue’).  But when it comes to scones and bagels, mentioning the number of calories they contain is an easy way to drive the following message home.

These breakfast foods may be the ultimate convenience food but they have quite a few downsides.

What lurks in scones and bagels?

The remaining calories come mostly from industrial seed oils. These are the nasty fats that worsen inflammation, prevent insulin from doing its job properly and are dangerous for the heart. 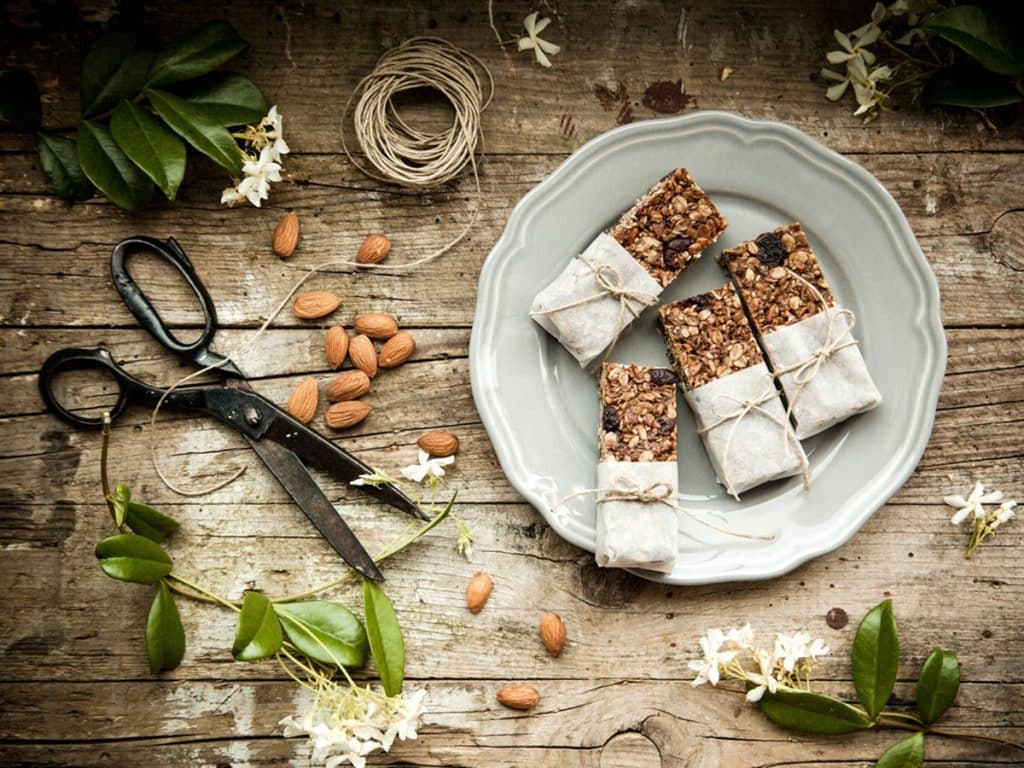 You’ve heard the saying ‘don’t judge a book by its cover’, right?

Well, I think that this applies really well to commercial granola bars. With their seeds, nuts and small size, these ‘healthy’ breakfast foods are nothing but candy.

What lurks in commercial granola bars?

A sugar crash! You’ll be left feeling like you need a nap at 11am…

As if this wasn’t bad enough, in a study published last year, scientists reported that a single high carbohydrate meal is enough to adversely affect your immune system and overall metabolism. And by metabolism, I don’t simply mean how much energy your body burns. You see, your metabolism also refers to other essential reactions, such as digestion and hormonal balance, which occur in your body. 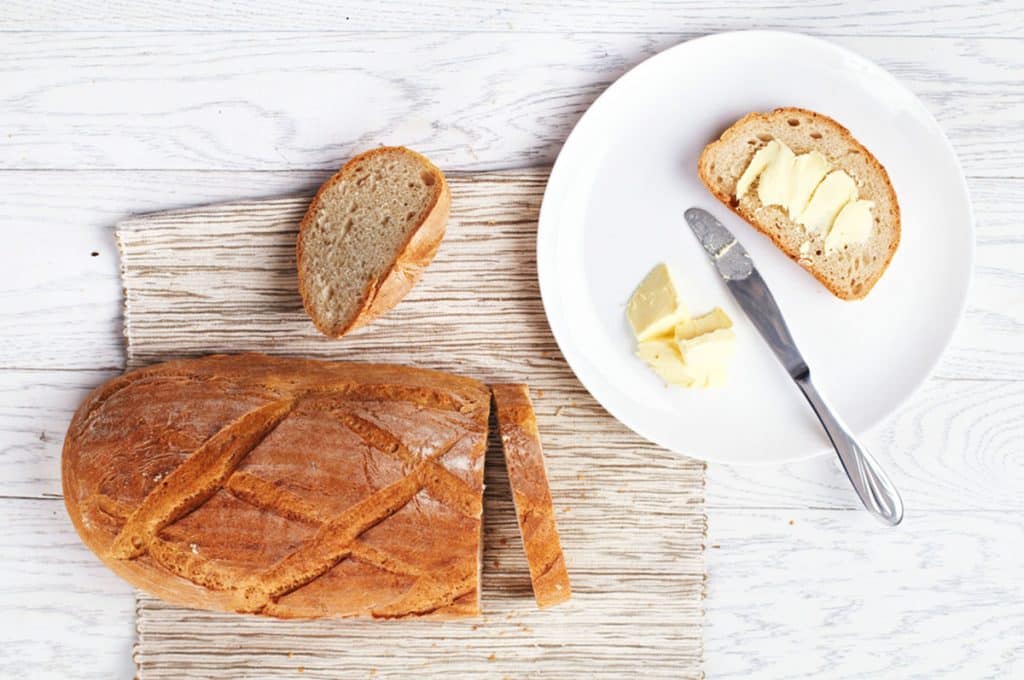 French toast consists of bread dipped in beaten egg and fried in butter. With some cheese on top. Contrary to popular belief, French toast is not unhealthy because it is fried but because of the bread.

What lurks in French toast? 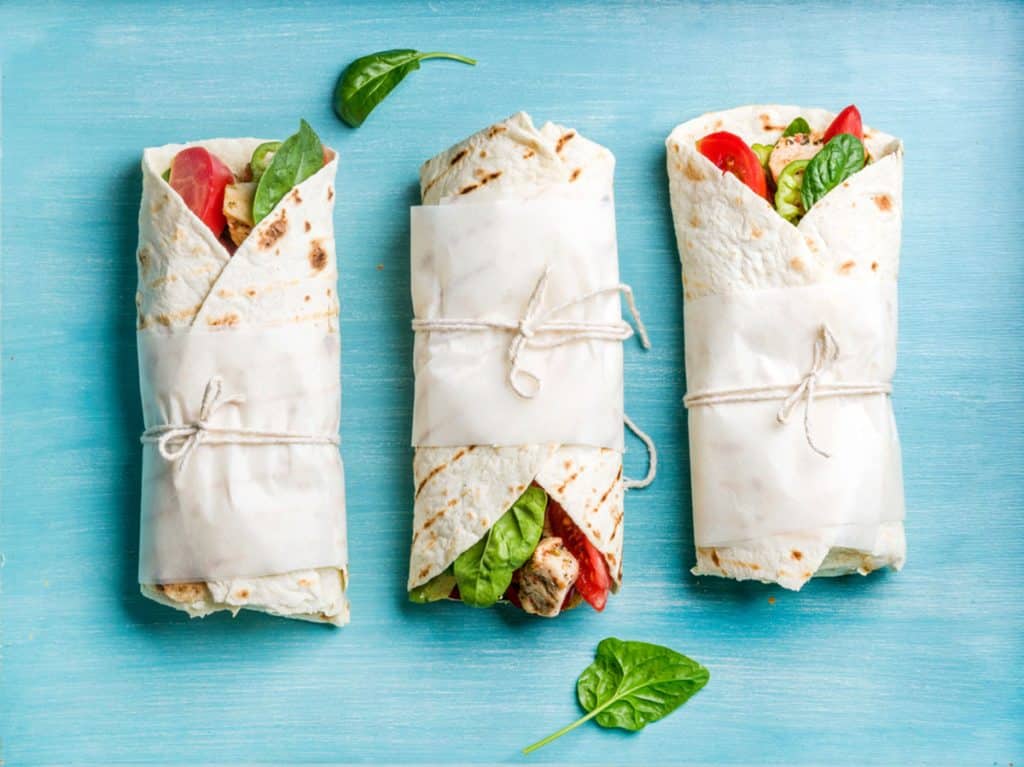 Often promoted as a healthier alternative to sandwiches, Heat n Eat wraps are kind of like pizzas with some extra veggies. 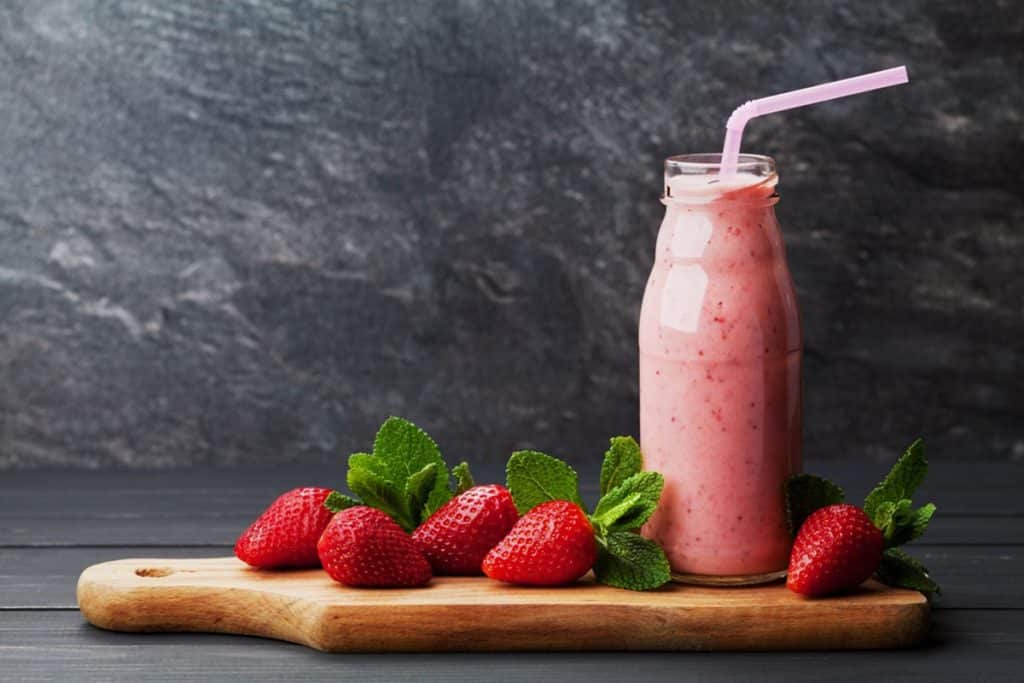 How can fruits constitute an unhealthy breakfast food? Well, the fruits themselves aren’t the issue. The problem lies in the quantity of fruits blended to make fruit smoothies.

Let’s say you use four fruits. Most people would see their blood sugar rise considerably if they were to eat these four fruits in one sitting. Now, when you blend the fruits, you’re, in fact, opening the fruits’ cells and cutting the fiber into small pieces.

In other words, your body will have less work to do to absorb this sugar.  And your blood sugar will rise even more making you more likely to eat more afterwards. The effect would be dramatic if you were to drink store-bought fruit smoothies.

What lurks in commercial fruit smoothies?

Whenever people ask me what I think of OJ, they immediately get in Hulk mode and go ‘But it contains vitamin C!’

What lurks in orange juice?

I know that oranges contain naturally occurring sugars. And these sugars are not unhealthy. What makes OJ unhealthy (even the 100% orange juice ones) is the number of fruits that are blended to yield a 12-ounce serving.

Yes, people have been drinking orange juice for ages. But their OJ was nothing like ours. Check out this funny, but interesting video on modern OJ.

‘You’re crazy!’ said one of my patients when I told her to switch to full-fat dairy products. She wasn’t ready yet to give up milk.

According to Mark Deboer, a pediatrician at the University of Virginia, ‘it appears that children who have a higher intake of whole milk or 2 percent milk gain less weight over time compared with kids who consume skim or nonfat dairy product’. 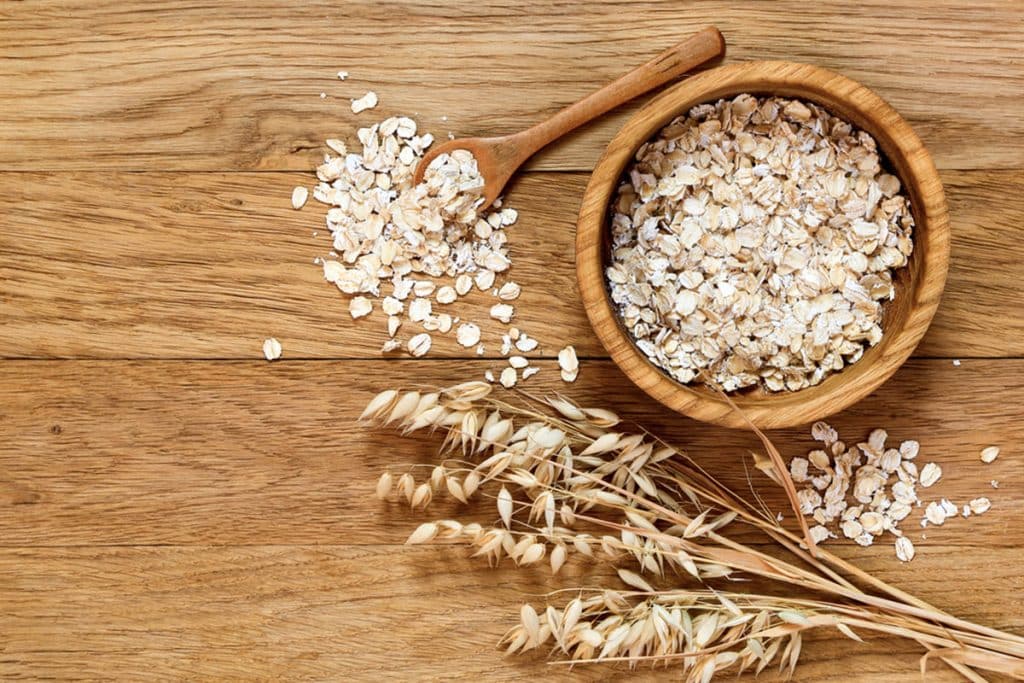 I never liked eating oatmeal. But then I learnt that it was a ‘health food’, and I forced myself to eat it. And I advised many of my patients to do so as well…

So, imagine my dismay when, after countless hours of research, I realized that oatmeal was just another unhealthy breakfast food marketed as ‘heart friendly’ or ‘an effective weight loss aid’.

What lurks in oatmeal? 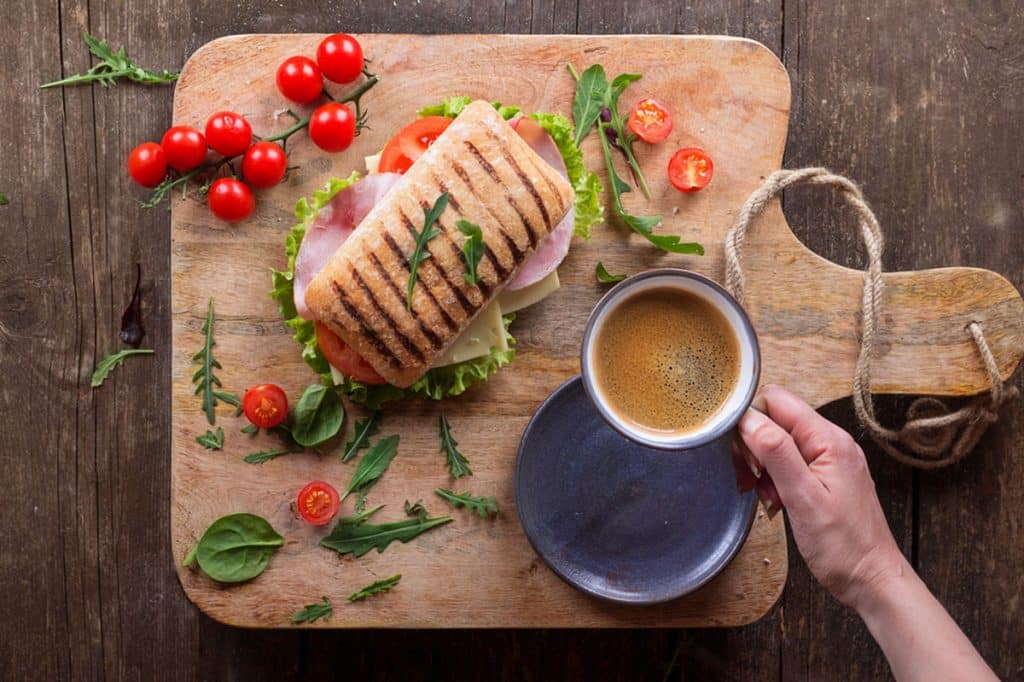 People will tell you that ‘you shouldn’t drink another creature’s milk’. But this doesn’t mean that non-dairy creamers are healthier alternatives. Consuming these ‘frankenfoods’ regularly is a recipe for disaster.

What lurks in non-dairy creamer? 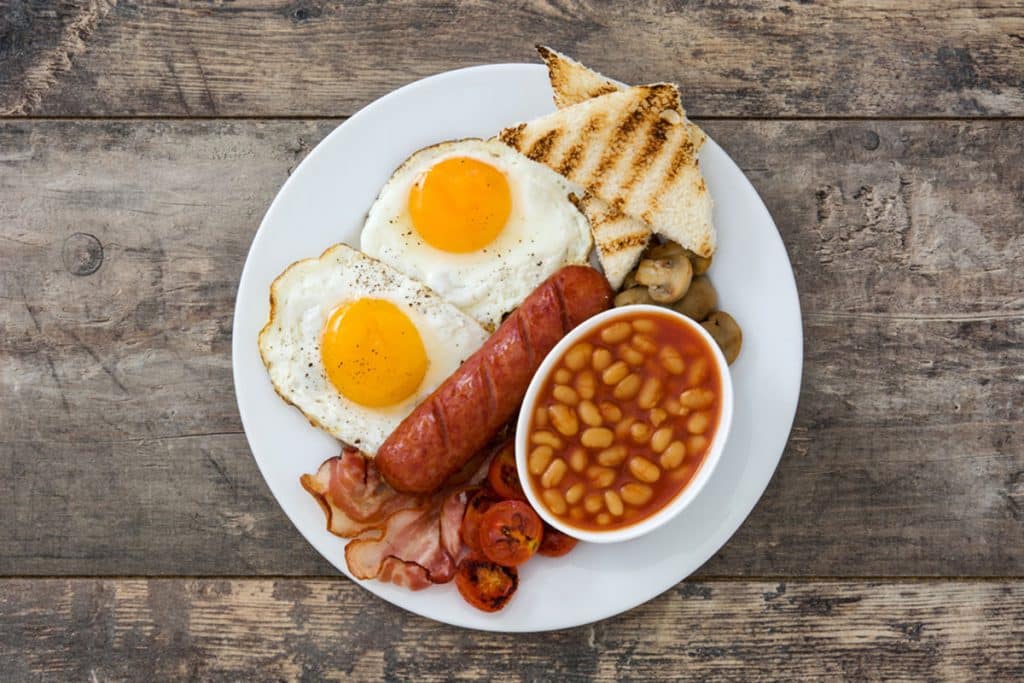 Commonly eaten on toast, this popular English breakfast food may be putting your health at stake.

What lurks in canned baked beans?

Wondering what to eat instead of these 16 worst breakfast foods? Then, make sure to check my next article for practical ideas and healthy substitutes.