These deep red-purple root vegetables have a particularly distinct sweet, earthy flavor. They stain everything they touch and are loved by some and hated by others. Despite the fact that beets contain the highest sugar content of any vegetable, they are absolutely brimming with powerful and essential nutrients… 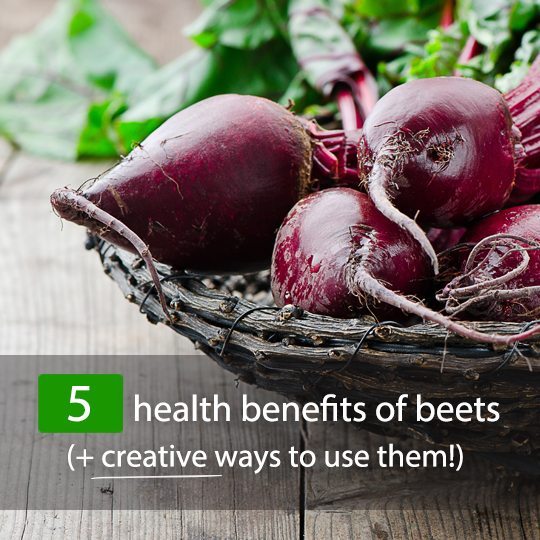 A Brief History Of Beets

Beets are root vegetables that are scientifically known as Beta vulgaris, and are also commonly called red beet, table beet, garden beet and beetroot. These robustly colored round maroon vegetables have a strong, distinctive and sweet flavor. Today’s beets evolved from the ancient wild seabeet, which dates back to prehistoric times when it grew naturally along the coastlines of North Africa, Asia and Europe. However, it was the greens of the vegetable that were consumed back then, and they were used mainly for medicinal purposes, such as a laxative and to relieve fever. Over time, new varieties of beetroot were developed in Europe, including the red beet, which we are most familiar with today. It wasn’t until the red beet started being cultivated during the Roman era that the root became more of a food staple. By the 19th century, beets were widely consumed across Europe, and were appreciated for their natural sweetness. People started using them as a source of sugar, and the genetically-modified sugar beets are a common raw material used to produce sugar. 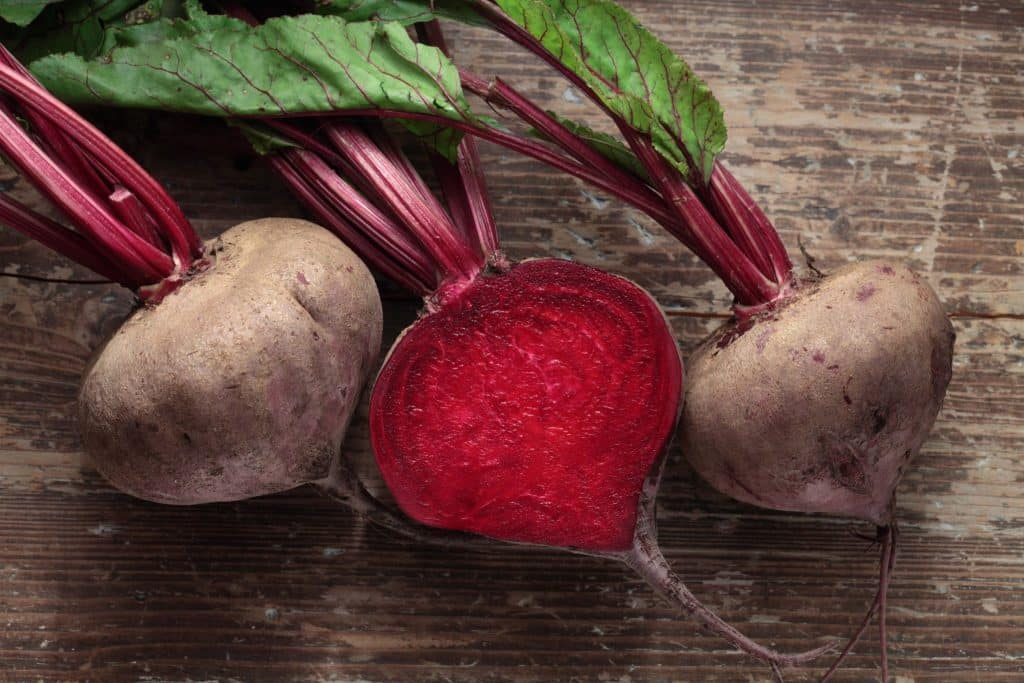 The Nutritional Value Of Beets

You should know by now that beets are very sweet (they are used to make sugar!), but, despite the fact that they have the highest sugar content of any vegetable, they are packed full of valuable nutrients. Beets are high in fiber, folate (vitamin B9), potassium, iron, manganese and immune-boosting vitamin C. They also boast beneficial organic compounds including carotenoids and flavonoids, while being low in calories. It is fairly safe to eat beetroot a few times a week, and the beet greens can be enjoyed in unlimited amounts. 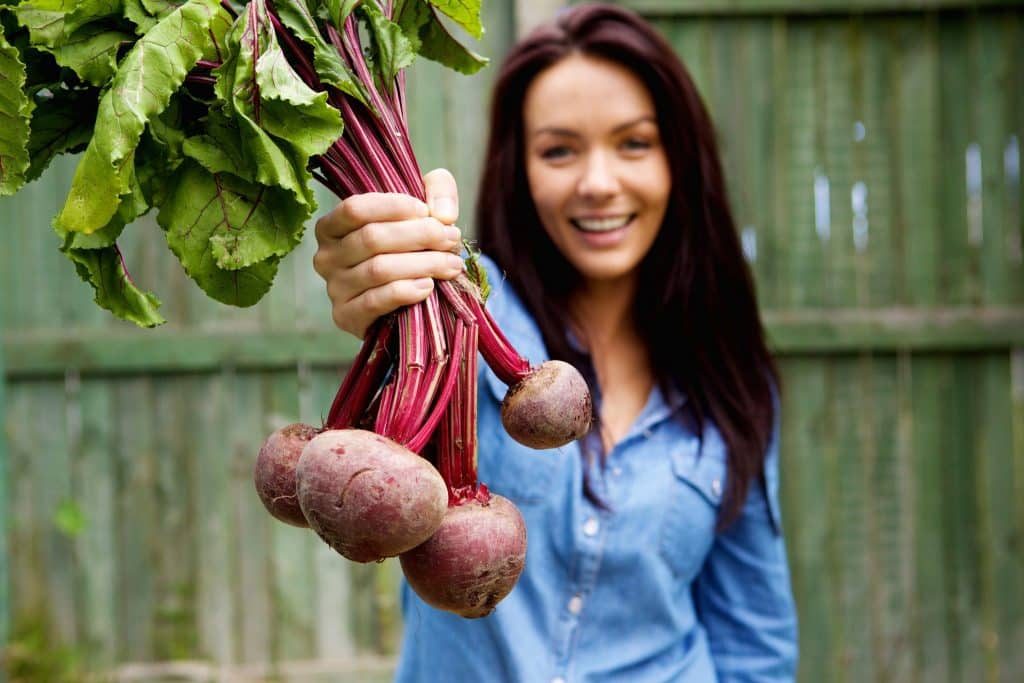 If you love that sweet, earthy taste of these beautifully colored vegetables, then you will be happy to learn about the powerful health benefits of beets!

Drinking a glass of beet juice has been found to potentially lower blood pressure almost immediately. A study found that within hours of consuming the juice, systolic blood pressure dropped by an average of 4 to 5 points when trialed on healthy men. It is believed the result comes from the naturally-occurring nitrates in beets, which are converted into nitric oxide in the body. This helps dilate blood vessels, improving blood flow, which, in turn, lowers blood pressure. Although the result was relatively small, researchers concluded that the reduction would equate to a 10% reduction in heart disease deaths on a public level.

The betaine in beets help protect cells, proteins and enzymes from environmental stress, as well as fighting inflammation, protecting internal organs, decreasing vascular risks, and potentially helping to prevent certain chronic diseases. This nutrient is made from the B-complex vitamin, choline, which helps regulate the cardiovascular system and inflammation in the body. As well as being a unique source of betaine, beets are also a unique source of phytonutrients called betalain, including betanin and vulgaxanthin. These are the two best-studied betalains in beets, and have both shown to provide antioxidant, anti-inflammatory and detoxification support. The exceptional concentration of betalains in beet flesh and peel is far higher than other vegetables and fruits, like rhubarb and chard, that also contain the phytonutrient. One study found that red beet products consumed regularly may provide protection against certain oxidative stress-related disorders in humans, because of their high betalain concentration. 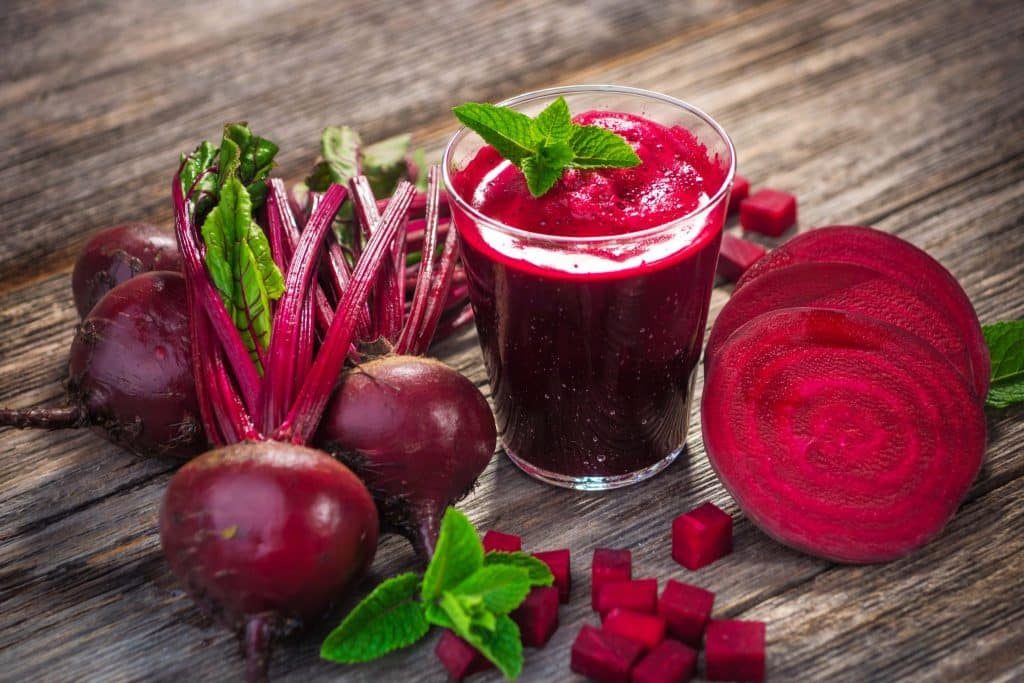 The nitrates in beets prove valuable again here, because, when turned into nitric oxide in the body, they may reduce the oxygen use in low-intensity exercise and increase tolerance to high-intensity exercise. When consumed as a juice, the nitrates are fast-acting and can increase stamina during a workout. A number of studies have confirmed the effects of nitrates on athletic performance. One study from the University of Exeter’s School of Sport and Health Sciences found that drinking beet juice could help you exercise for up to 16% longer. Researchers looked at eight cyclists consuming half-a-liter (500ml) of beet juice over a six-day period. The juice contained nearly 700mg of naturally-occurring nitrate. 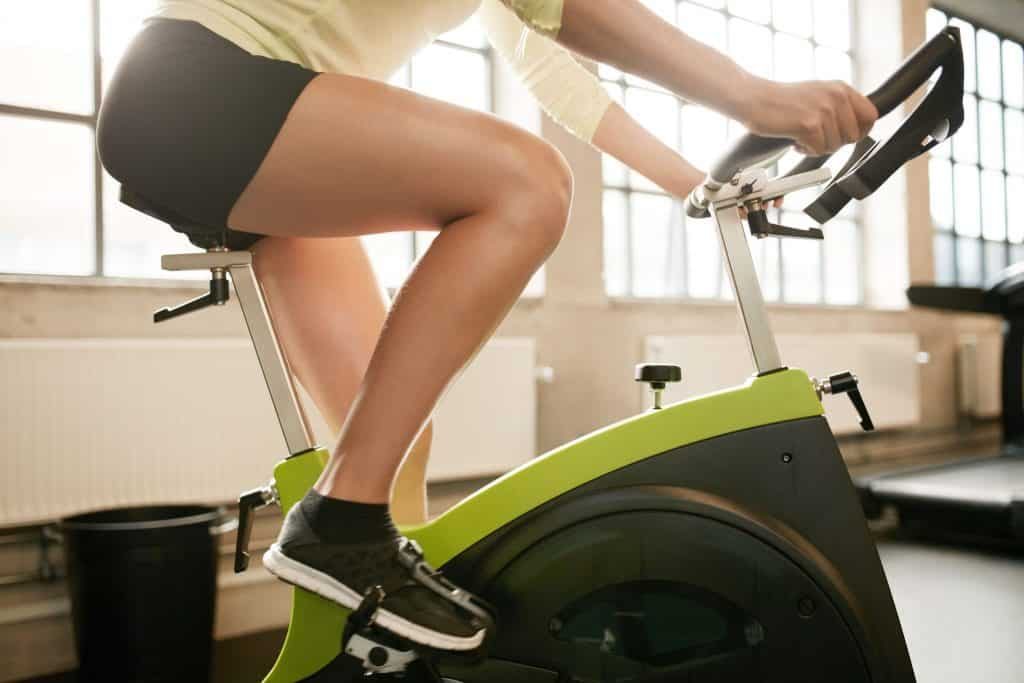 We’ve already looked at how the nitric oxide in beets relaxes and dilates blood vessels, and, as well as lowering blood pressure and boosting stamina, this also increases blood flow to the brain. As a result, brain function might be improved, which is particularly important in ageing people. Research shows that our capacity to generate nitric oxide reduces as we age, as well as the brain’s energy metabolism and neuron activity. A 2010 study found that dietary nitrate may be useful in improving brain function in older adults. Researchers looked at 14 older men and women, who consumed beet juice as part of a high-nitrate diet, for two days. As a result, there was increased blood flow to the frontal lobe of their brains, which is a region known to be involved in executive functioning like focus, organization and attention to detail. 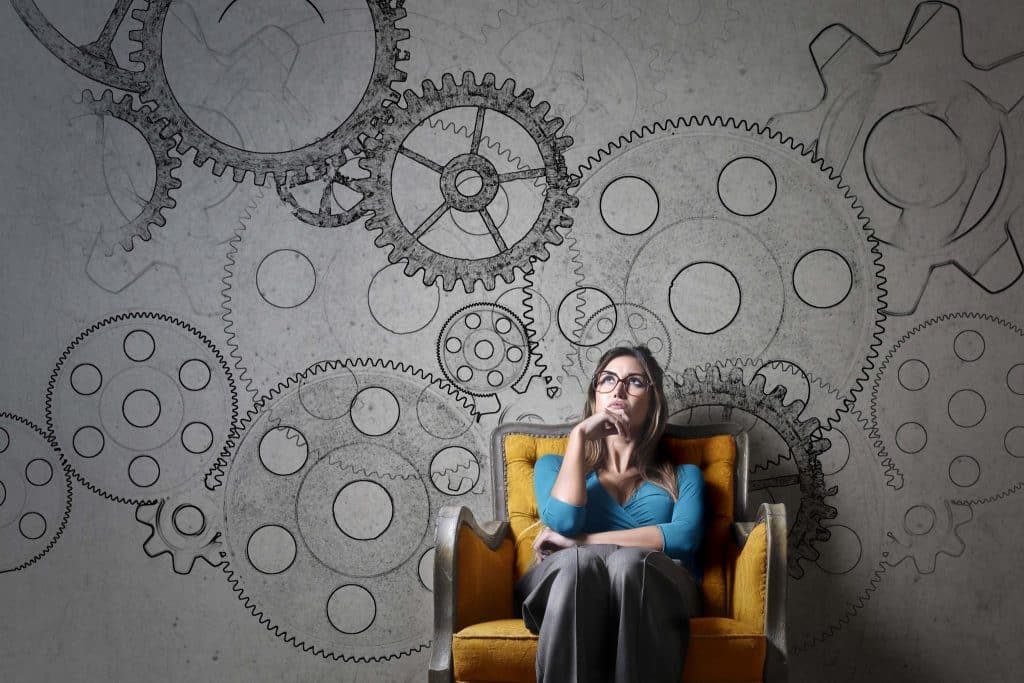 A daily serving of beets can help lighten the load on your liver, which does all the heavy cleaning work on your blood, detoxing the body. The bioactive agents of betaine and amino acids in beets have been found to prevent and reduce accumulation of fat in the liver. One study found that feeding beets increased liver health and had a positive effect on its redox state.

While beets are extremely healthy and nutritious, there are always risks with overconsumption. These root vegetable contain oxalates, which can cause bodily fluids to crystallize, when consumed in excess. People with kidney or gallbladder problems should reduce their consumption of beets because the risk of bladder and kidney stones may be exacerbated. 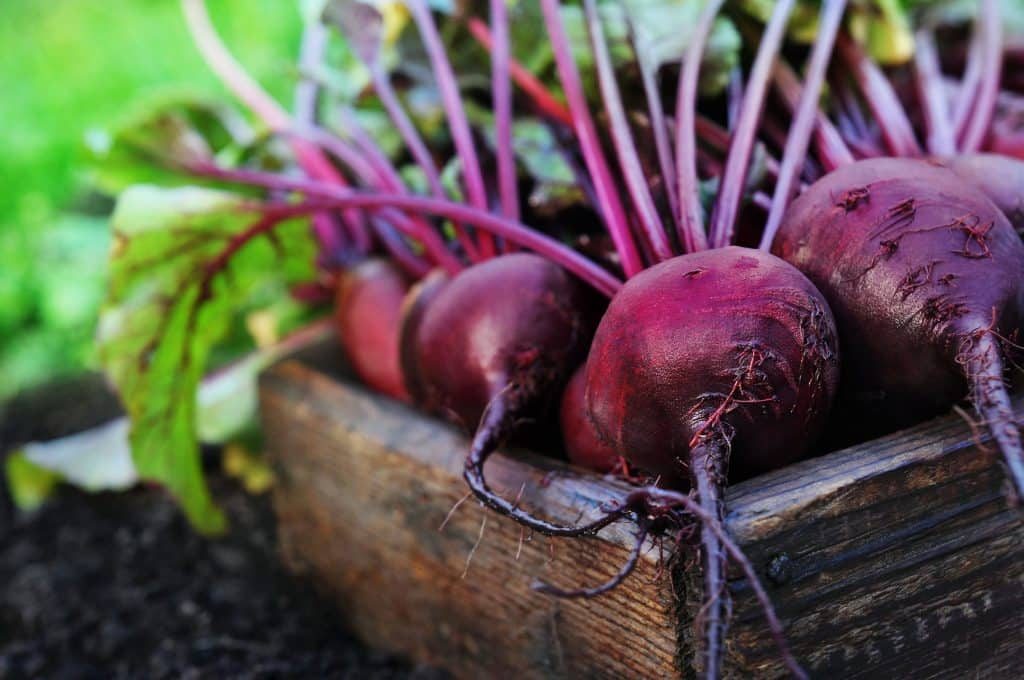 Don’t throw away your beet greens, because they are some of the healthiest parts of the plant. They contain protein, phosphorus, fiber, zinc, magnesium, vitamin B6, potassium, copper and manganese, as well as providing significant doses of vitamins A and C, calcium and iron. In fact, beet greens have even more iron than spinach, and have a higher nutritional value than the root of the plant. Beet greens can be added to vegetable juices or sautéed along with other green leafy vegetables as a side dish.

Creative Ways To Use Beets

This vibrant, sweet vegetable is extremely versatile. Beets can be juiced, eaten raw in salads, roasted with savory foods, pickled, and used as a major ingredient in healthy desserts and sweet treats. The great thing about beets is their color. They can be used to make mock (and healthy) red velvet cakes and cupcakes…

Beets can be juiced and enjoyed on their own, or as part of a tasty vegetable juice. Check out this nutrient-rich veggie juice recipe for a serious hit of vitamins, minerals and other essential nutrients. The recipe calls for beets, carrots, apple, celery, tomato, cucumber and lime. For a slightly simpler and more stronger-flavored option, try this four-ingredient juice recipe that includes carrot, beet, ginger and lemon. 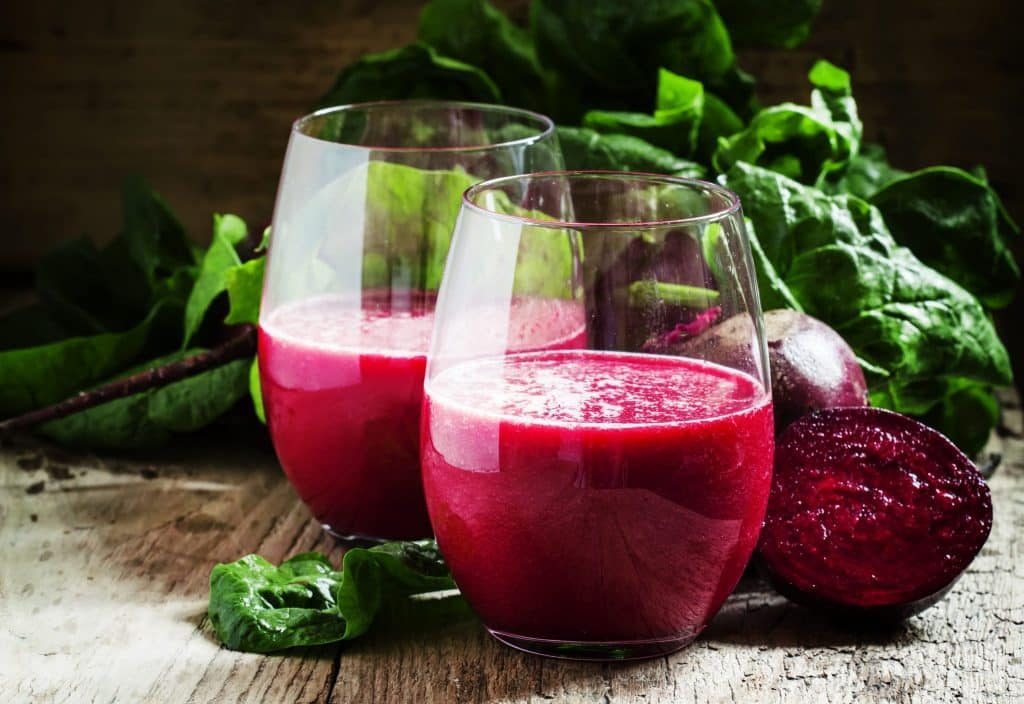 Besides adding a stunning color to desserts, beets add a serious nutrient boost to your favorites. One of the most perfect healthy dessert substitutes that beets work for is red velvet. Try this healthier red velvet cupcake recipe. It looks identical to traditional red velvet cupcakes, but has the added benefit of super nutritious beets in the recipe and no artificial food coloring. 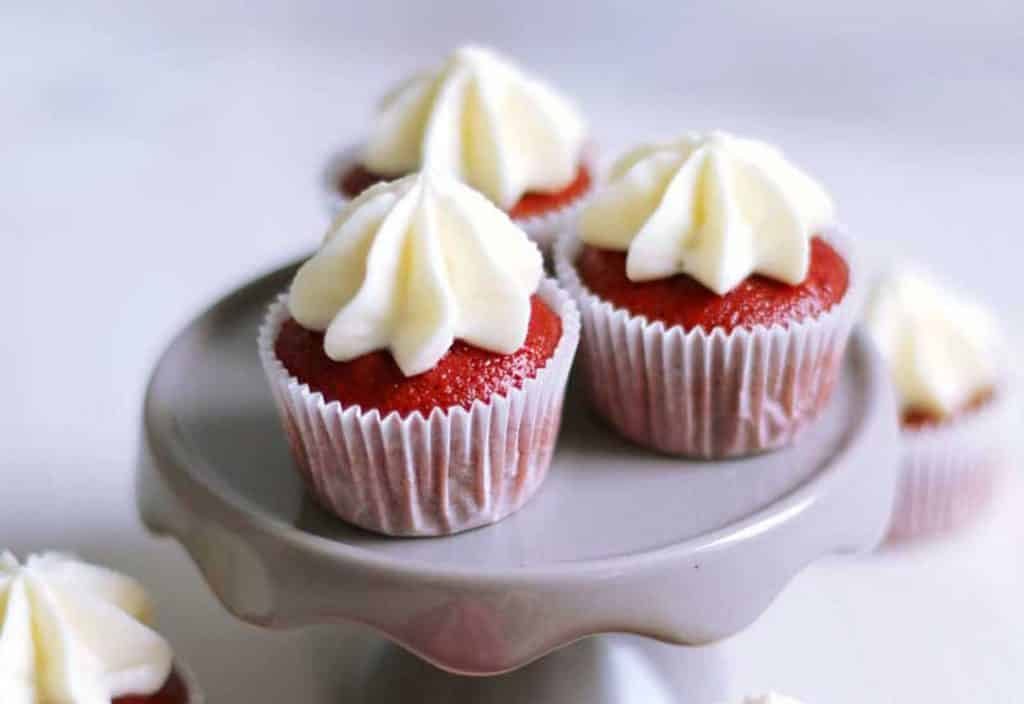 And check out this stunning and delicious raw red velvet fudge recipe. Ingredients include cashews, unsweetened vanilla almond milk, beet puree (which you can make yourself), vanilla, stevia, pink Himalayan salt, raw cacao butter, brown rice protein powder, and unsweetened natural cocoa powder (or cacao powder). So, as well as being beautiful and irresistible, it is totally natural and healthy! 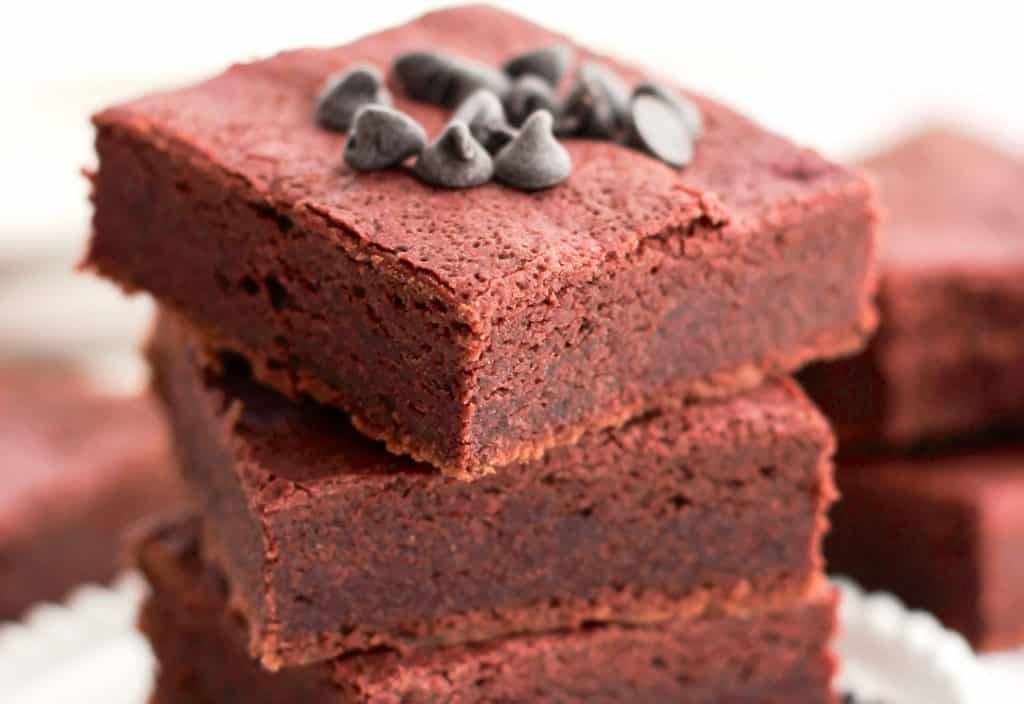 Because of their sweetness, beets make an excellent pair for salty, savory ingredients like cheese, such as this simple but delicious goat’s cheese and roasted beet salad. Because goat’s cheese is so salty and pungent, it always pairs well with something sweet, and beets are the perfect balancing option. The recipe calls for beets, goat’s cheese, parsley or mint and lemon and shallot dressing, which also has a recipe on the same website. For a savory dairy-free option, try this clever beet and cashew ‘cheese’ canape. This colorful, healthy finger food option calls for cashews, beetroot, lemon, apple cider vinegar, white teff flour, baking powder, egg, almond milk, coconut oil, alfalfa sprouts, dill, capers and pepper. 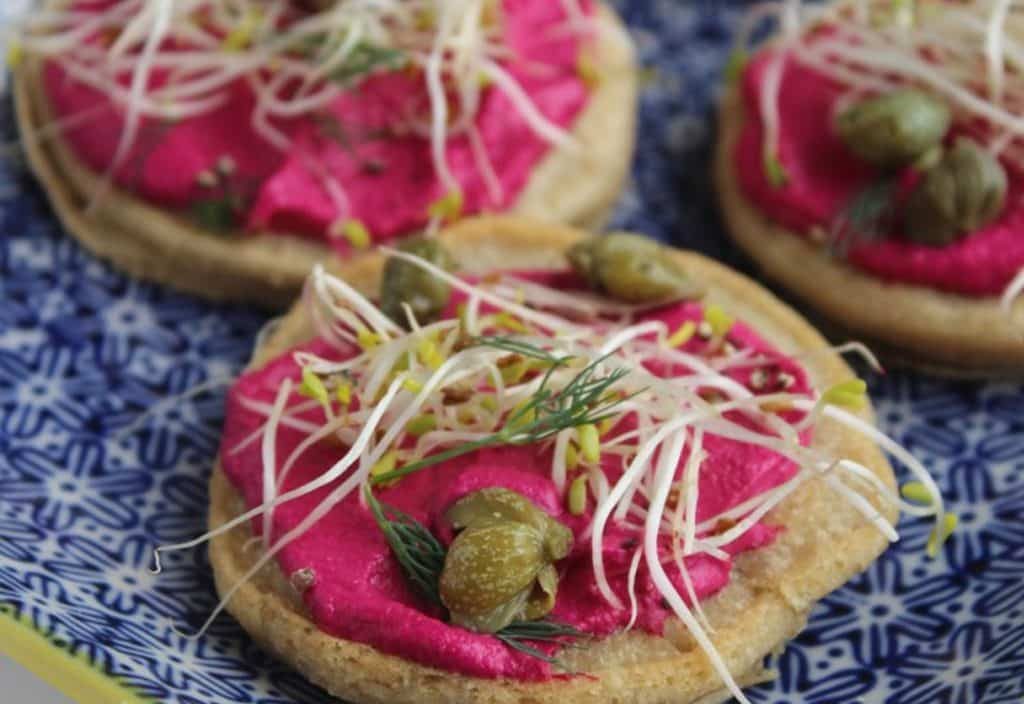 Beets actually don’t have to be cooked or made into anything fancy. You can reap their health benefits in a simple salad. In fact, this is one of the healthiest options, because you can eat them alongside other incredibly beneficial and nutrient-dense ingredients. Try a homemade bean salad with thinly sliced beetroot, avocado, cucumber, bell peppers, red onion, beans (kidney, black, cannellini, chickpeas or any other combination), raw baby spinach leaves, seeds of your choice (such as flaxseed, pumpkin seeds or sunflower seeds), with a drizzle of olive oil and apple cider vinegar, with salt and pepper to taste. You’ll be surprised at how wholesome, filling and delicious a bean salad is!