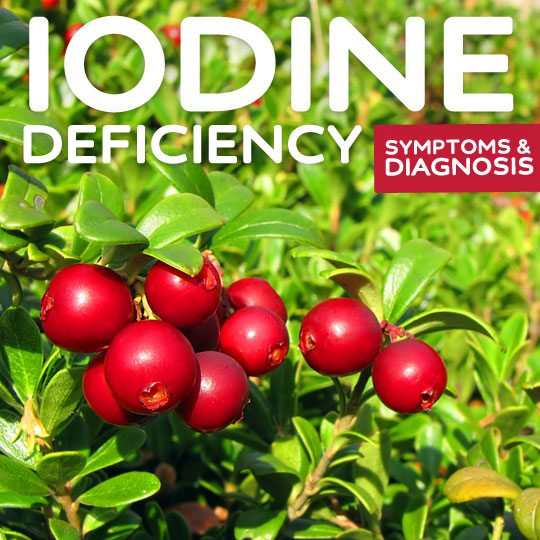 Running an iodine deficiency is now an uncommon problem in the United States and other first world countries, due to the use of iodized salt, as well as a diet that includes many foods rich in iodine. Here we’ll explore just what it means to be deficient in iodine, what you can do about it, and also see if it’s possible to get too much of a good thing.

Not getting enough iodine is still a major global health concern, one that is watched closely by agencies like the World Health Organization. For many Americans it’s not a major problem, since iodized salt has been in widespread use for several decades now, and foods that are rich in iodine are readily available and regularly consumed.

These days iodine deficiency is somewhat rare, but still happens. There are also iodine proponents that say the official recommended amount of iodine has been set too low, and that humans require much more than what is being suggested. The reason iodine gets so much attention is that it is directly linked to the thyroid, and having low iodine for extended periods of time may lead to an under-active thyroid, and the complications that can arise from that condition.

If you are short on iodine you may not notice many changes unless it becomes a chronic condition spanning several weeks or months. The symptoms might come on so gradually that you might not even notice them until it becomes a bigger problem. That’s why it’s a good idea to check to see whether or not you are showing any signs if you suspect you might have low iodine levels.

You might notice an intense feeling of fatigue, or it may be that it contributes to a state of depression. There is also the chance that it could slow down your metabolism and lead to weight gain. Iodine deficiency can also result in reduced cognitive abilities like memory and your overall thought process.

The most accurate way to test to see where you’re at in regards to iodine is with the help of your doctor. The good thing about going this route is that they can also check your other vitamin and mineral levels while you at their office, and you can have a broader understanding on where your nutritional strengths and weaknesses are. You can then make an informed decision about which foods you should increase, and which ones you’re OK on.

There are also at-home testing kits that you can use that involve strips that you urinate onto in order to see where you stand. These can give you a general idea on where your iodine levels are on that day, but your doctor will best be able to see if that is accurate, and can look for other signs that may indicate how accurate the test is.

There are several reasons why a person might be low on iodine, and the most common one is that they’re not getting enough of it from the foods they’re eating. Since the body cannot make iodine on its own, it’s relying on you to eat foods that contain it. And since it can’t store up reserves of iodine, it needs a regular intake of these foods in order to function at its best.

One possible reason why you might be showing low levels of iodine is that your body is not absorbing it from the foods you are eating.

How to Get More Iodine

There are several ways you can get more iodine into your body, and the best way is to eat more foods that contain iodine in them. Since your body requires a daily intake of iodine, it’s essential to eat foods that naturally contain it.

If you’re unable or unwilling to eat the types of foods due to dietary restrictions or your lifestyle you can take iodine supplements to cover the shortage. These are typically in the form of kelp, and provide a days worth of iodine along with other nutrients, typically for a very reasonable cost. It’s a good idea to check with your physician to see if they recommend taking a supplement, and also to verify that you are indeed showing an iodine deficit.

Aside from taking in more iodine, you can take steps to help your body absorb the iodine it does get. This could be as simple as trying to reduce the amount of fluoride your body is subjected to. Fluoride acts to deplete iodine levels, so making sure that your water is properly filtered could be one easy way to go about having more iodine in your system.

View the benefits of iodine for your thyroid & overall health.

How Much Is Too Much?

According to most medical recommendations it’s not a good idea to exceed the recommended iodine intake. It’s called a trace element because the body only needs a small amount of it in order to do its job. Getting too much iodine can lead to an overactive thyroid, which has its own share of problems and symptoms.

Some theories suggest that humans as a species need plenty of iodine in order for superior health and well-being, and build the case that the recommendations for iodine were set quite arbitrarily, and in order to help solve immediate problems like mental retardation and goiter, and did not consider what a healthy dose would be. It’s important to do further research and come to your own conclusion as to how much iodine you’ll aim for, with the help of your doctor.

As you can see, Iodine is an essential element that you don’t want to go without, but luckily for many this is not a major concern. If you want to make sure that you’re getting enough iodine, and are worried that you may be low on it, you can always check with your doctor. As long as you’re following a balanced diet and your body is able to absorb the iodine you’re consuming, it shouldn’t be a problem for you.