Eating low carb means sticking to foods that either contain no carbohydrates, or very few of them. One strategy is to load up on foods that don’t contain any carbs, which frees up space to have other carbohydrates in the form of vegetables. The one thing to remember is that foods without carbs are also low in fiber, so you’ll want to make sure that you are supplementing your diet with other foods that contain fiber to help your digestive system along. You should also consult with your doctor before starting any diet advocating severe carbohydrate restriction. 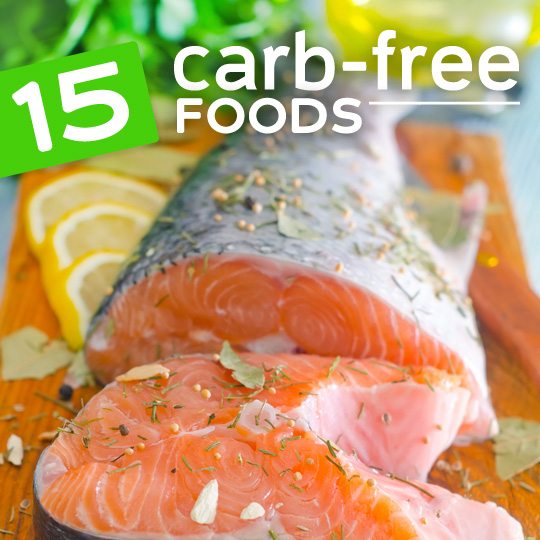 Chicken contains no carbs at all, and is one of the favorite food for those that want to watch their carbs because it is so versatile. You can cook chicken in many ways while keeping the carbohydrate count to a minimum. You can fry it up in butter or olive oil and it will maintain its carb free status. There are also several seasonings and spices that do not contain carbs, and you can use any of these to add massive amount of flavor to the chicken without adding to the net carbs. Pairing chicken with a low carb veggie is a great idea to have a satisfying meal without spiking your carb intake. 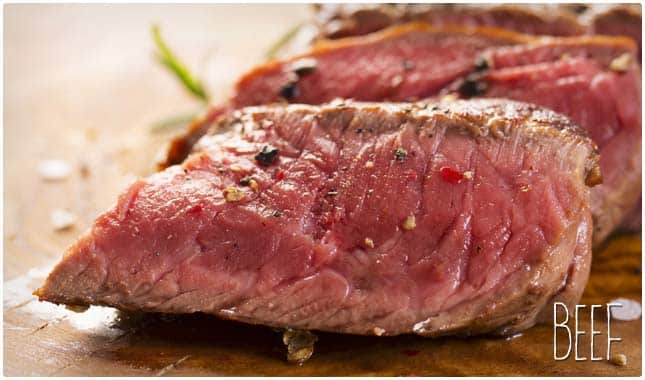 Beef is another go-to food if you’re looking to cut carbs because it doesn’t have any. The great part about beef being on the list is that it provides plenty of minerals and nutrients like iron and magnesium, so you’ll be giving the body things it needs while limiting the number of carbs taken in. Beef is also off the charts when it comes to protein, and this can be a big help when it comes to building lean muscle mass. Serve up some steamed veggies with your choice of beef and you’re well on your way to having a great meal that is low in carbohydrates.

You’ll be happy to know that butter does not contain any carbohydrates, so you can use it to flavor up your vegetables and other foods without worrying about its effect on your carbohydrate numbers. Butter is often vilified because of its high fat content, but many of today’s most popular diet plans include butter as a fat that you can use, and recommend it over vegetable oil or soybean oil. When selecting your butter it’s good to be picky. Go with organic grass-fed butter over conventional butter. It’s a more natural form, and is better for your body in general.

Choose any of the wild game meats and you’ll be all set in the carb department. Some of the more popular game meats with zero carbs are deer, rabbit, wild turkey, bison, pheasant, and boar. You may have trouble finding these in the local supermarket, but many butchers will have access to them, and there may also be a wild game ranch that you can buy them from. There are also online providers of wild game meat of all kinds that will deliver it to your door. A bonus with game meat is that it hasn’t been subjected to the lifestyle and additives used in conventionally farmed livestock.

Turkey is a great meat to have if you are being carb conscious because it won’t actually add to your carb totals. Be sure to buy roasted turkey breast instead of the kind you find in the deli in cold cut form. You’ll help cut down on the amount of nitrates and sodium found in the turkey. Also opt out of turkey sandwiches as bread is one food that’s high in carbohydrates and can quickly undo your efforts to get your carbs down or go with a lettuce wrap. 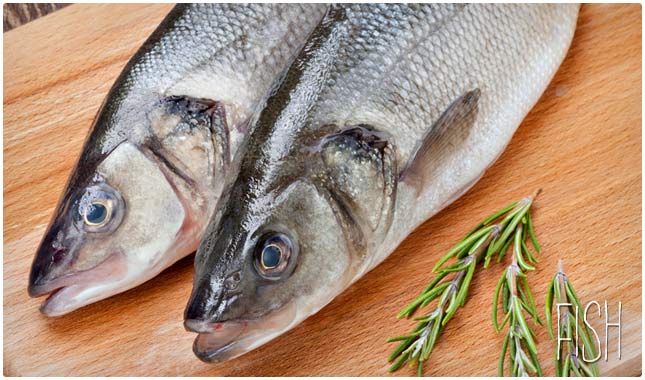 You can select any fish you’d like, and it won’t contain carbohydrates. This is good news because fish can be a big part of a healthy diet. Take salmon as an example, it provides plenty of protein, and omega-3s that help the body fight inflammation and conditions associated with inflammation. You don’t have to stick with salmon, all fish will have no carbs to them, they’ll just vary in regards to their omega-3 content. Tuna has no carbs and is readily available, and often consumed as part of a low-carb lifestyle, especially when combined with weight training.

Goose might not be the most popular of meats, but if you happen upon it you can eat it without worrying that your carb count will suffer. Although not as popular as it once was, goose used to be a regular menu item for many families around the world. This is another food that has plenty of recipes available to assist you if you don’t know how to select one or cook it up.

Eggs are great because you can cook them up so many different ways, and they taste fantastic cooked in butter. The nice part is that most low-carb vegetables will taste great in an omelet, so you can make yourself a hearty and filling breakfast without spoiling your low-carb lifestyle. As far as carbohydrates are concerned, neither the yolk nor the white has any, so you can eat the entire thing without regard to its carb value.

Duck is another form of poultry that will not add to your carb intake for the day. While not as popular and widely available as chicken or turkey, it’s still able to be found, you just have to look a little harder. There are plenty of ways to prepare duck, so don’t be scared off by it if you don’t know how to cook it. A search for duck recipes is sure to provide dozens of appetizing ways to make it, and it could end up being one of your new favorite foods. 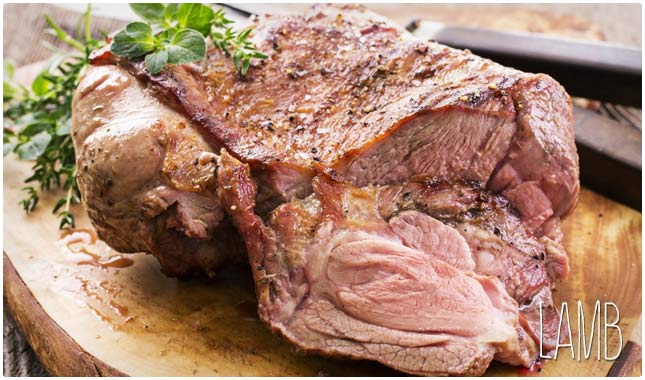 Lamb doesn’t get a lot of attention in marketplace dominated by chicken and beef, but it is one you may want to seek out to help round out your carb-free foods list. In several countries lamb is more popular, so there are plenty of recipes to follow if you’re not quite sure how to prepare it. Lamb tends to be a bit fattier than other meats, but when you are focusing on a low-carb diet you are often allowed to have more fat than you are if following a low fat diet plan. Consult your plan to see if lamb makes it onto the list of foods you can have. For example, Atkins, arguably the most popular low-carb diet plans allows lamb during all phases of their program.

The entire group of mollusks is fair game while eating low carb, including popular choices like mussels, clams, and oysters. Most of these can be cooked by steaming them, which is a great method because it adds nothing to them in the way of carbs. Some of them, like oysters, can even be eaten raw so you know nothing has been added to them. This also includes land dwelling mollusks like snails, but it’s probably more likely that you’ll be presented with the sea-based variety, unless you order escargot at a fancy French restaurant.

Indulge in any shellfish you’d like without worrying that it’s going to wreck your no-carb plan. Crab, lobster, and shrimp are the three most popular shellfish you’ll find in restaurants. This makes a great choice when dining out. Eating at restaurants can present the biggest challenge to those looking to limit their carbohydrates, as nearly everything on the menu will be laden with carbs. But between fish, mollusks, and shellfish you can pretty much go on a seafood kick, dunking it all in melted butter without concern that it’s ruining your plan at eating low carb. Just steer clear of the Cheddar Bay biscuits if you go to Red Lobster, at 16 grams of carbs per biscuit even one could spoil a day’s worth of carb consciousness.

Organ meats from any animal will be free of carbs, including liver, hearts, kidneys, tongue, brain, and even tripe. These may not sound like the most appetizing foods to eat if you’re not used to eating them, but there are lots of ways to cook them up so that you might forget what you’re eating because they taste so good. Just a few generations ago organ meats were much more prevalent in everyday cooking than they are today. They have fallen out of favor as people tend to prefer ground beef, and chicken breast, thighs, and drumsticks over anything internal. 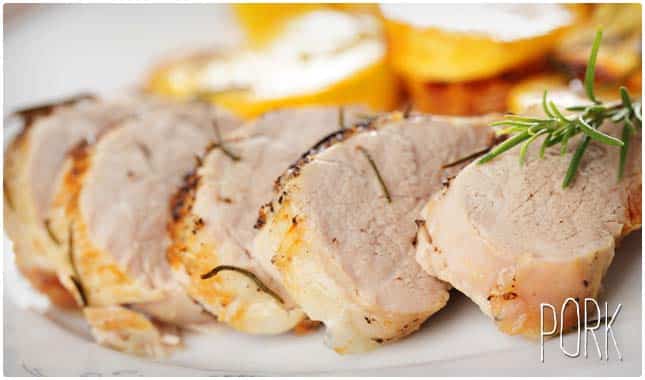 Pork contains only a trace amount of carbohydrates, not enough to disqualify it from being on our zero carb food list. It is often found on the approved foods list for many of the most popular low-carb diet plans out there. Pork comes in many varieties, so it is a very versatile food for you to enjoy that won’t set you back in the carbs department. You’ll want to check with your specific diet plan to see if pork is something you should be eating or not. It tends to be very fatty, and many varieties undergo a curing process which introduces extra sodium and nitrates to the meat.

Veal may be one meat that you don’t want to add to the list, but moral dilemmas aside it is carb-free. There are actually several good qualities of veal, if you can get past where it comes from. Compared to beef it is generally more flavorful and tender while remaining a lean meat. It still provides plenty of protein and minerals, making it a better choice if you’re looking for the best taste sensation. Of course, it is also typically more expensive than beef, so it may not be something you move into your regular rotation.