Onions have a long history as a food staple and natural medicine, used for millenniums around the world. They are robust in taste and smell, and are often used daily as the first ingredient in meals, from stir fries and curries to soups and salads. There are countless ways to cook and eat onions, and contained within the teary layered ground vegetable, there is are potent juices and oils that hold some very powerful health benefits. 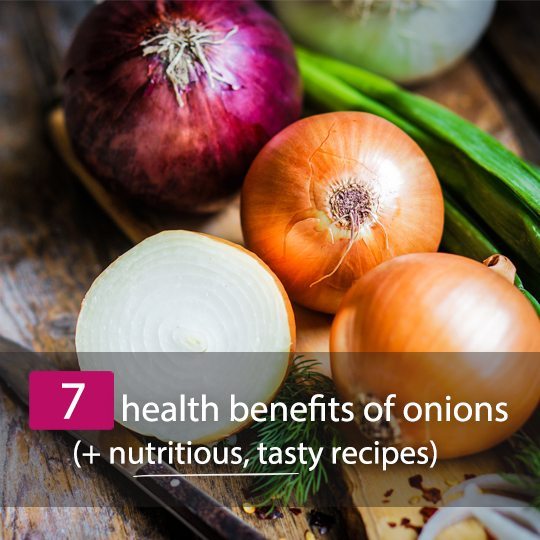 A Brief History Of Onions

Onions are vegetables that grow underground as bulbs at the base of plants called Allium cepa. They are grown worldwide and are related to garlic, chives, shallots, leeks and spring onions (scallions). Onions are made up of layers underneath the peel and vary in size, color and shape, with the most common being white, brown and red. Smaller onions come in a number of different types, including chives, leeks and shallots. Scallions or spring onions include a small white bulb and green tops, and are actually just very young onions, harvested before the bulb has swelled. The taste and aroma of onions can vary as well, from mild to sweet and sharp to pungent, depending on the variety, season and quality. Stronger smelling onions are the ones that cause more tears! They have a reputation for making you cry and making your breath stink. 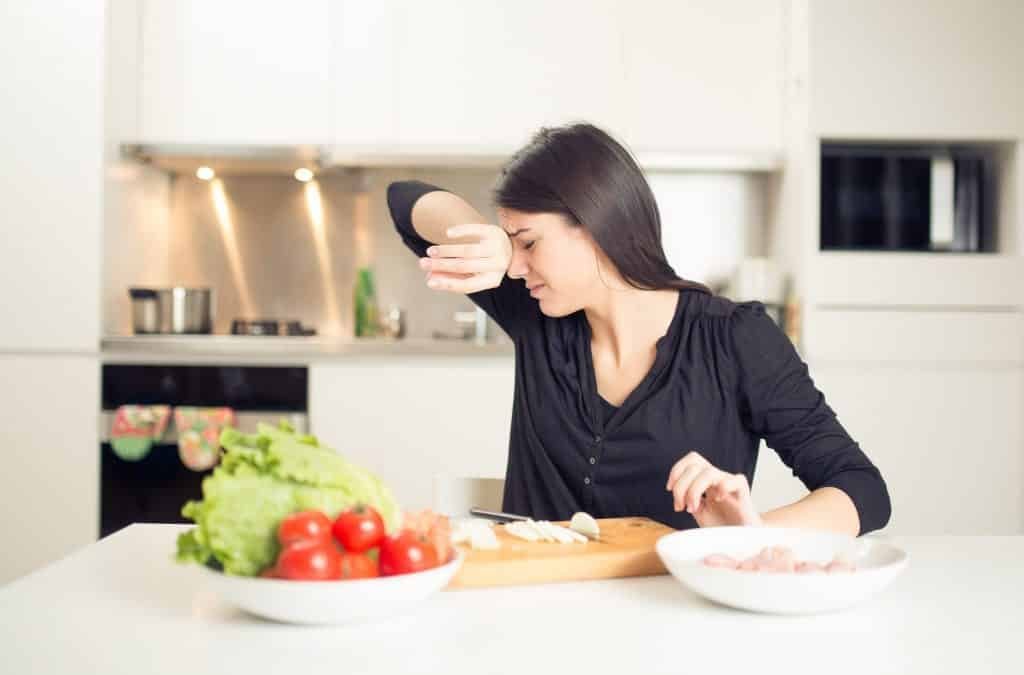 Onions have a long and fascinating history around the world, used as a preventative medicine during epidemics, including the plague in Europe, and as a cure for colds by the Roman emperor Nero. Onions have been cultivated for at least 5,000 years, according to research. They grew wild in many different countries, and were therefore most likely consumed for thousands of years all over the world before major international trade became commonplace. Onions may, in fact, be one of the earliest cultivated crops because they were less perishable, easier to grow in different soils and climates, and more transportable than many other foods at the time.

These underground vegetables were grown in Chinese gardens as far back as 5,000 years ago, and are referenced in some of the oldest Vedic writings in India. They can be traced back to 3,500 B.C. in Egypt, where they were considered an object of worship. Onions symbolized eternity, and were buried alongside Pharaohs. The representation came from the round shape and layers of the onion, seen as a ‘circle-within-a-circle’ structure. 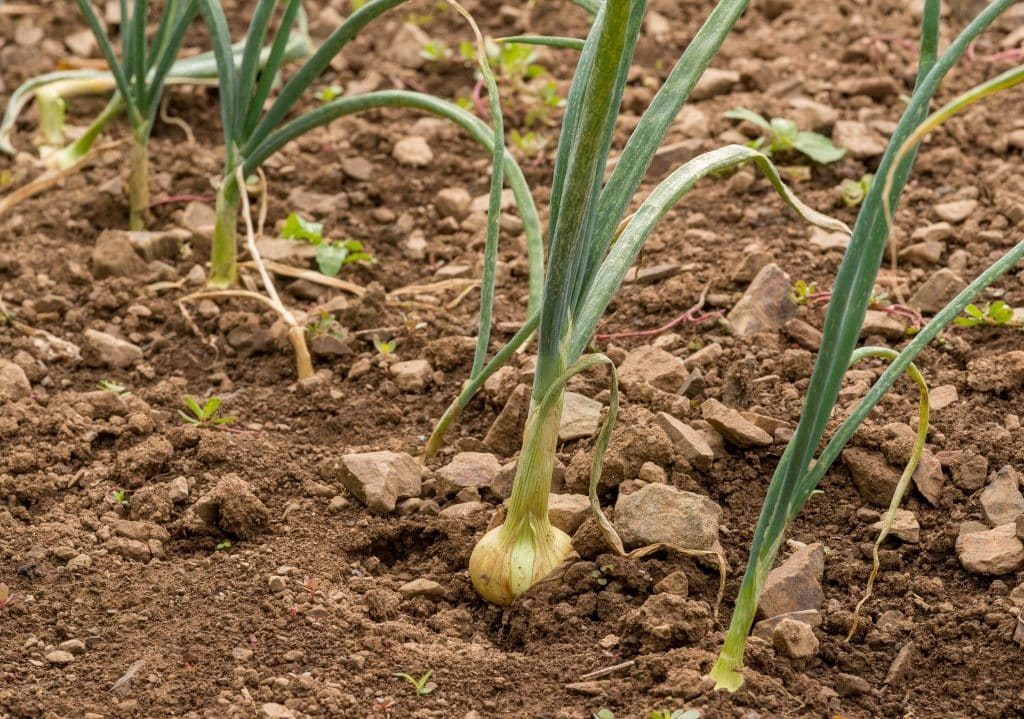 Onions are made up of a number of important and essential nutrients, including natural sugar, vitamins, minerals and fiber. Raw, they are made up of 89% water, 9% carbohydrates, 1.7% fiber, with minuscule amounts of protein and fat. 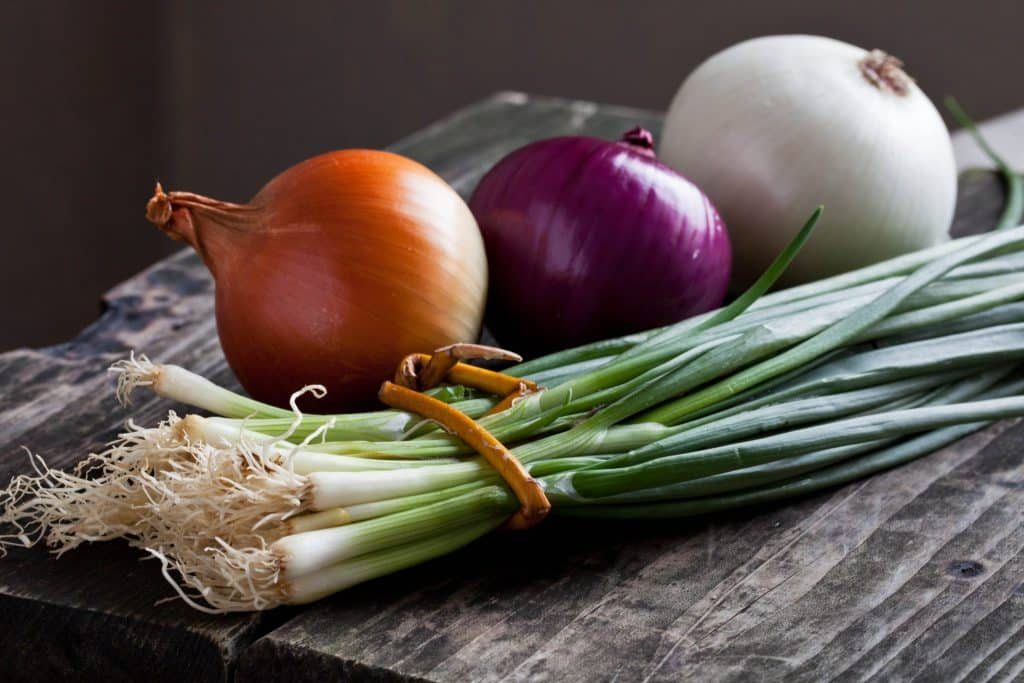 There is quite a difference between raw and cooked onions, with the nutrients being far more active in its raw state. That’s because it contains a variety of organic sulfur compounds in a volatile oil, which provide certain health benefits. They are partly destroyed when heated. However, onion juice can be difficult to digest for some people, and can cause irritation in others. If that’s the case, there are ways to cook onions, causing the least damage to its powerful sulfur and oil. For example, oven baked in their skins, like baked potatoes, creates a milder flavor and becomes easier to digest while preserving many nutrients. While onions are extremely healthy when eaten raw, you probably don’t want to follow the former prime minister of Australia’s lead, when he took everyone by surprise, biting into a raw, unpeeled onion in Tasmania. Maybe go for chopped in a salad!

Onions have long been considered healthy, medicinal vegetables around the world, and over the years, a number of studies have proven certain health benefits…

1. Onions May Boost Your Immune System

The polyphenols in onions act as antioxidants in the body, which protects it against free radicals. That, in turn, helps boost and strengthen the immune system. Onions have a higher concentration of selenium than other vegetables. According to research, this trace mineral helps reduce inflammation and stimulates immune function. Immune cells that have a selenium deficiency tend to endure more oxidation, which can cause them to develop and reproduce inefficiently. The quercetin in onions has also been found to be beneficial to the immune system – this time in relation to allergies. According to a study from the University of Maryland Medical Center, quercetin may reduce allergic reactions by stopping the body from producing histamines, which cause sneezing, crying and itching during a bout of allergies. 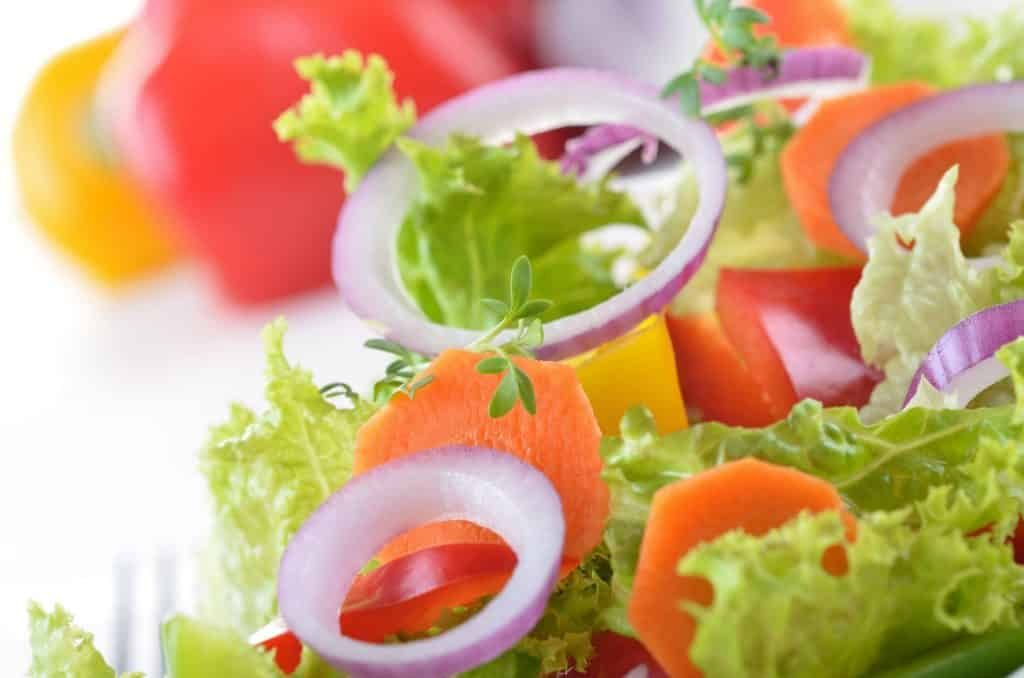 2. Onions Have An Anti-Inflammatory Effect

There have been several studies into the anti-inflammatory properties of onions, with researchers finding the vegetable’s sulfur content and quercetin to have significant benefits. Onions have strong antioxidant properties that can reduce inflammation and stop harmful microorganisms from growing in the body. A 2005 study looked at four types of onions – red, violet, white and green, measuring their phenolic contents, antioxidant properties and free radical scavenging activities. Researchers found that all varieties had protective properties, with the outer layers of the red variety being a particularly rich source of quercetin, and showing significant protection of DNA damage caused by free radicals. Another study looked specifically at small yellow onions, finding that their anti-inflammatory effects selectively inhibited cell growth. Researchers concluded they could be used as a potent source of beneficial phytochemicals. 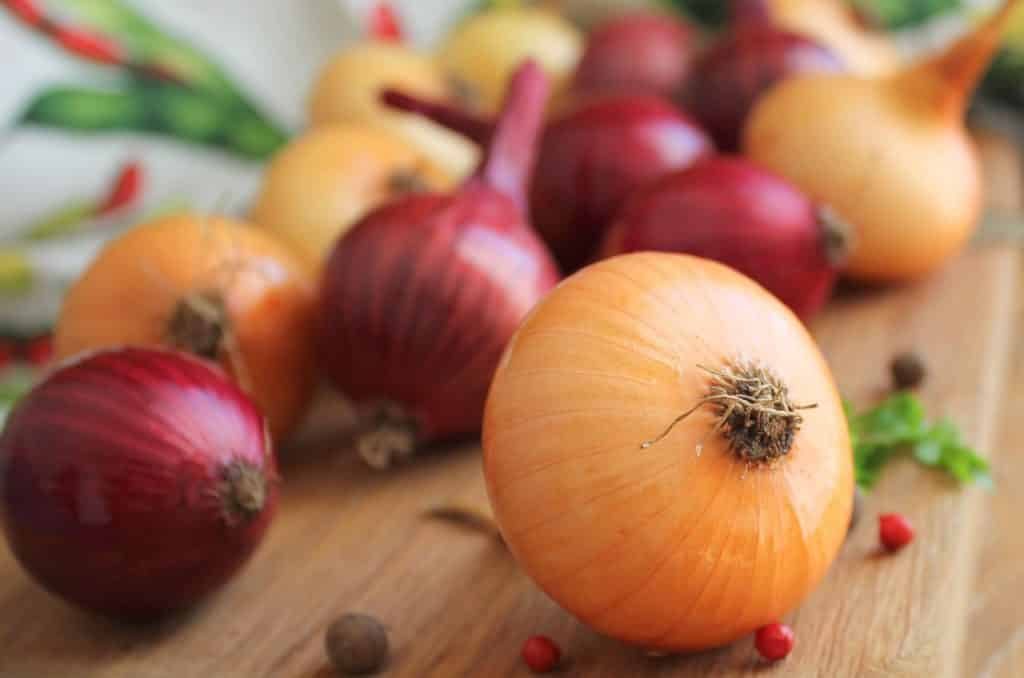 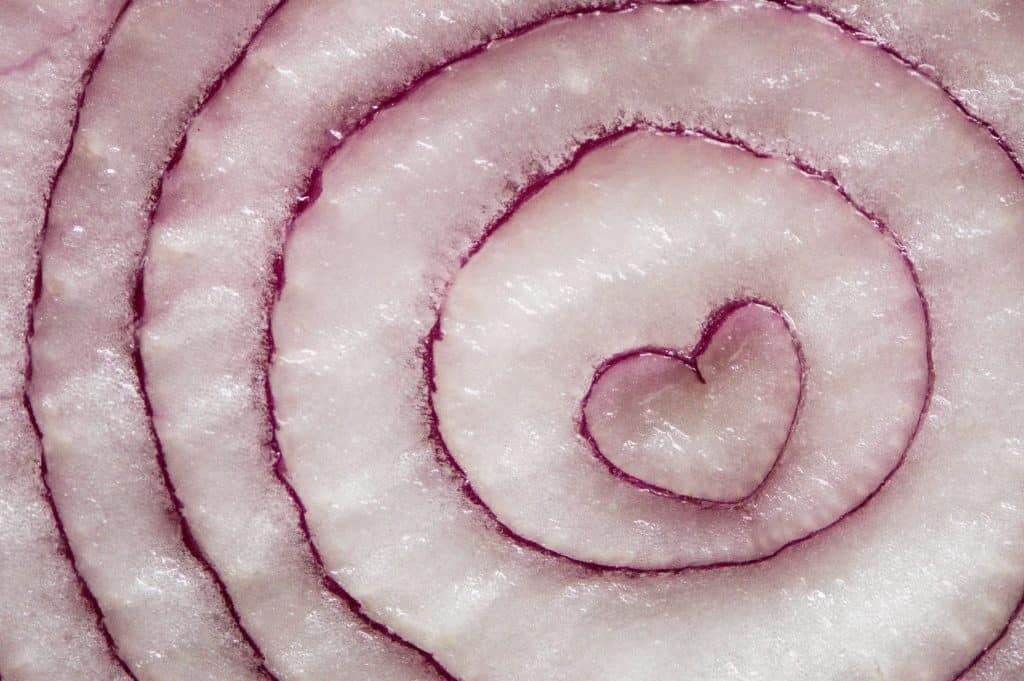 Onions have been shown to lower blood sugar levels in several animal and human studies and may decrease the risk of diabetes. The chromium in onions assists in regulating blood sugar while the sulfur content helps lower blood sugar by triggering insulin production. One human study published in 2010 looked at the hypoglycemic effects of raw red onions. Researchers found that 100 grams per day significantly reduced blood sugar levels in the subjects, and concluded that they could be used as a dietary supplement in the management of type 1 and type 2 diabetes. 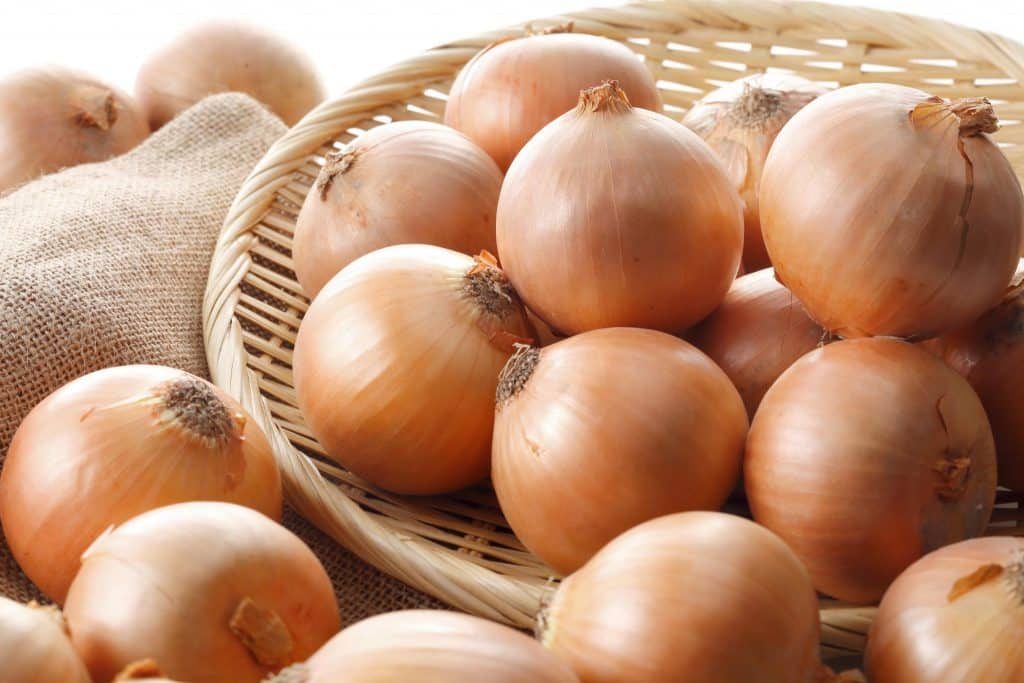 Onions have been shown to have protective effects against bone deterioration, such as osteoporosis, which is particularly common in postmenopausal women. Both animal and human studies have concluded that onions can minimize bone loss, and potentially even increase bone mass. One study looked at the effect frequent onion consumption had on perimenopausal and postmenopausal women aged 50 and older. The group was divided into participants who consumed onions less than once a month, twice a month to twice a week, three to six times a week, and once a day or more, based on self-reported dietary history. Researchers conducted a body dual-energy x-ray absorptiometry and found that bone density increased as the frequency of onion consumption increased. Individuals in the study who consumed onions once a day or more had an overall bone density 5% greater than individuals who consumed onions once a month or less. Researchers concluded that older women consuming onions frequently may decrease their risk of hip fracture by more than 20%, compared to women who never eat onions. 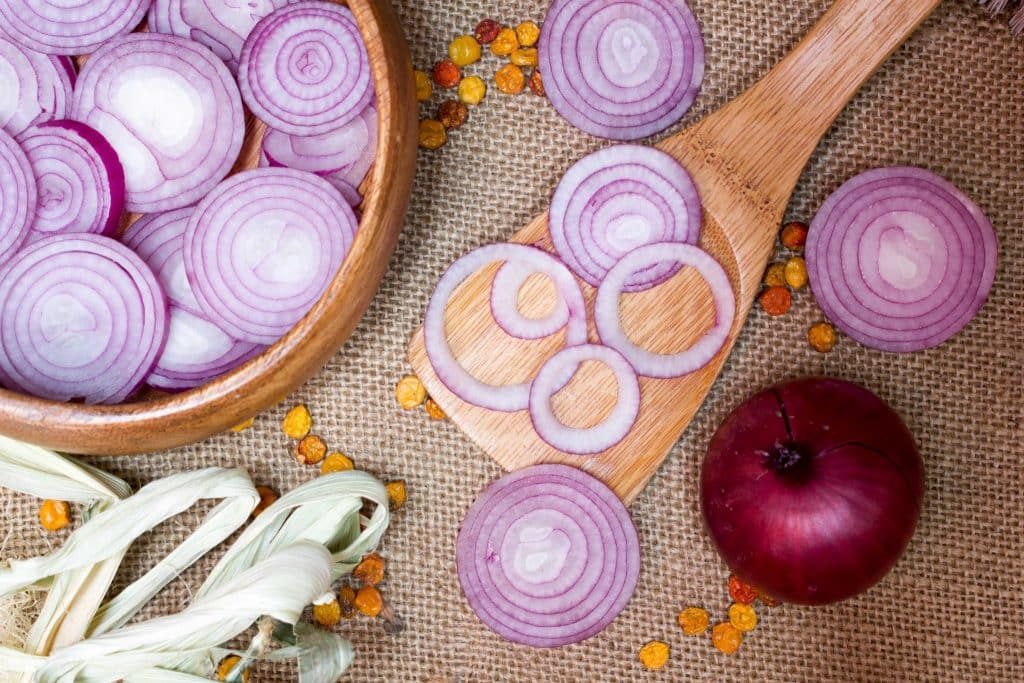 Onions have a beneficial fiber called inulin, which belongs to a class of carbohydrates called fructans. Fructans act like prebiotics, which serve as food for probiotics and promote healthy gut flora. This, in turn, encourages a healthy gastrointestinal tract and reduces constipation. Onions also contain a type of soluble fiber called oligofructose, which promotes healthy bacteria growth in the intestines. This has been found to prevent and treat certain types of diarrhea. 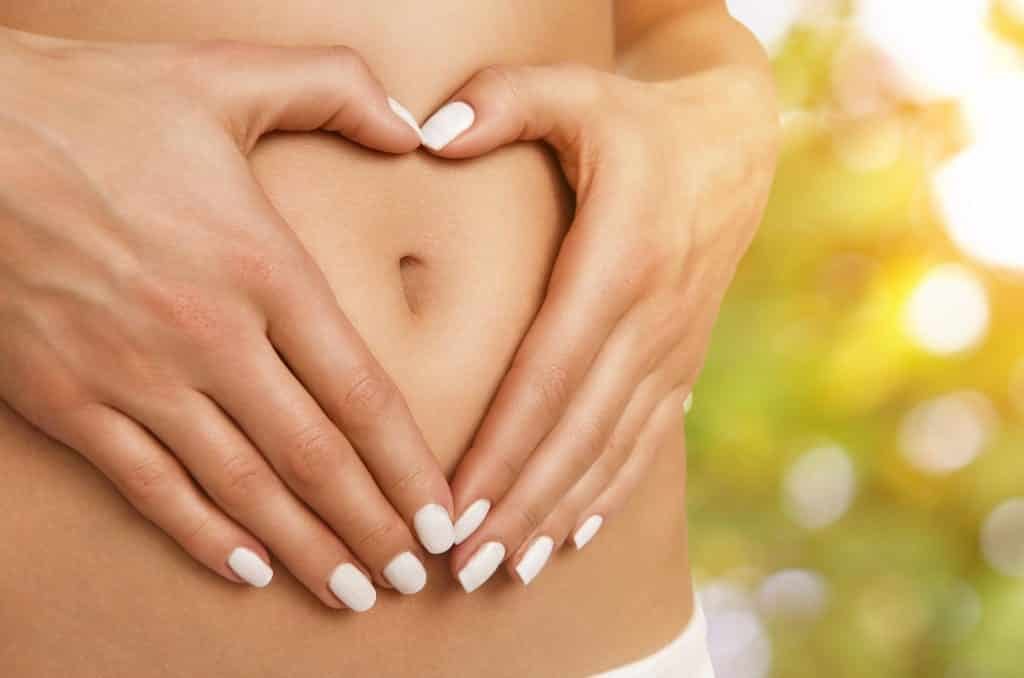 7. Onions May Be Linked To Cancer Prevention

Several observational studies have looked at the link between increased consumption of onions and a reduced risk of certain types of cancers, including stomach, breast, colon, prostate and ovarian. One study looked at the potential benefits of allium vegetables, including onion and garlic in southern Europe. Researchers looked at the consumption of onion between 0 to 14 and 0 to 22 portions per week and found that there was an inverse association between the frequency of allium vegetable consumption and the risk of several common cancers. A 1996 study looked at whether increased onion consumption could decrease the risk of stomach cancer. Researchers concluded that there was “evidence for a strong inverse association between onion consumption and stomach carcinoma incidence”.

Onions make a fantastic base for so many meals. A classic way to start cooking anything on the stove top is to fry onions and garlic in a drizzle of olive oil.

One quick, easy vegan option is a vegetable soup. Start with two roughly chopped onion, three cloves of garlic, three centimeters of ginger, two teaspoons of turmeric and two teaspoons of coriander seeds fried in a dessert spoon of olive oil. Once the onion is soft and aromatic, add four roughly chopped carrots, three roughly chopped zucchinis and 1.5 liters of water. Cover and simmer for one hour, blend and serve with salt and pepper. Here are some more raw and cooked onion recipe links…

Bell Pepper Salad – This colorful, flavorful salad is absolutely bursting with nutrient-dense ingredients. The powerful vegetables, including bell peppers, onion and tomatoes are full of vitamins, minerals and flavonoids, while the healthy fat of the olive oil helps the body absorb some of those important nutrients. 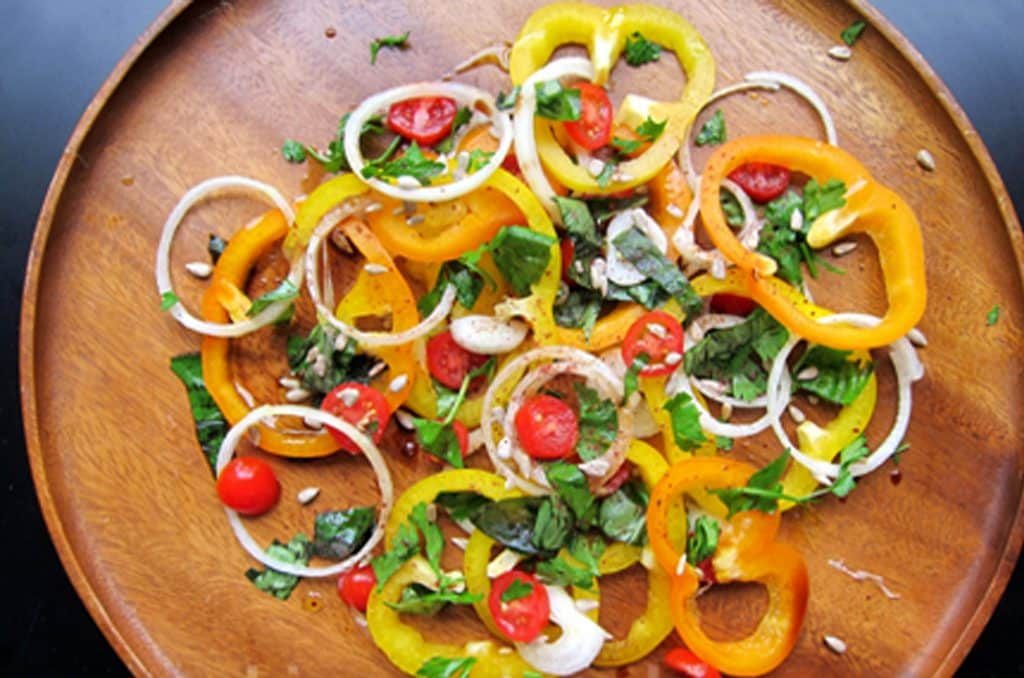 Mango Salsa – This delicious yellow dip is full of flavor and the perfect accompaniment to savory, salty food. Ingredients include mango, red onion, cilantro, lime and jalapeño. The blogger even says this tasty salsa is a great way to get kids to eat onions, so give it a go!

Pico De Gallo – This is another salsa recipe, but is more traditional in the sense that it has a tomato base. This one includes plum tomatoes, which are full of flavor, white onion, jalapeño, lime and cilantro. 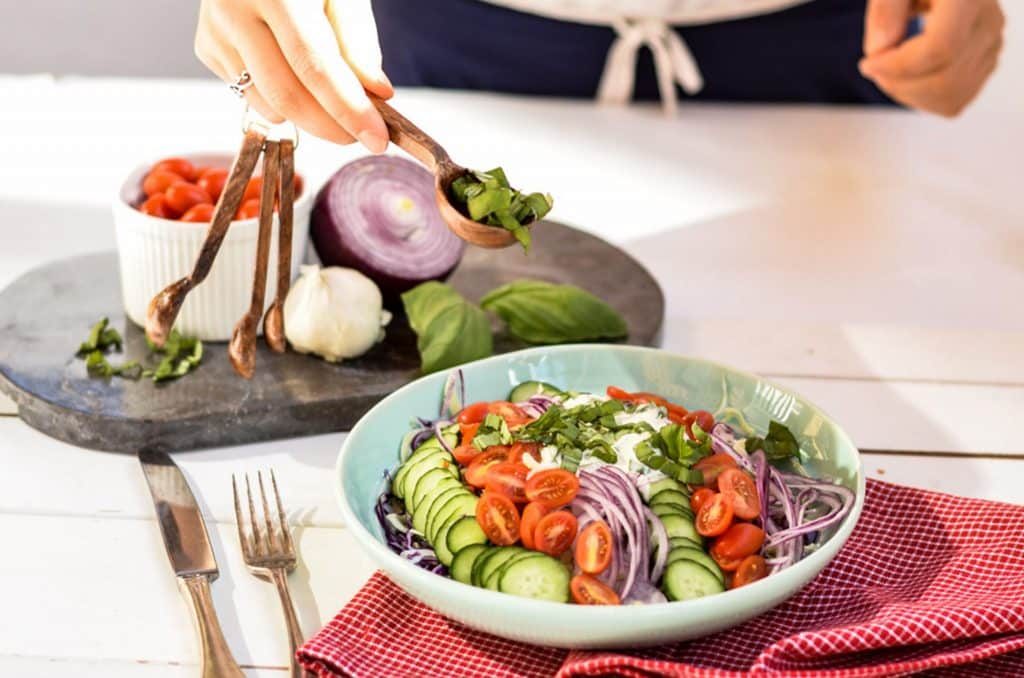 Baked Onion Bhajis – One of the yummiest onion-based foods are Indian bhajis. This vegan recipe is a slightly healthier version that the traditional fried dish, because it is oven baked instead. Ingredients include oil, chickpea flour, onions, turmeric, cumin, coriander, ginger, chilli, tomato puree and water.