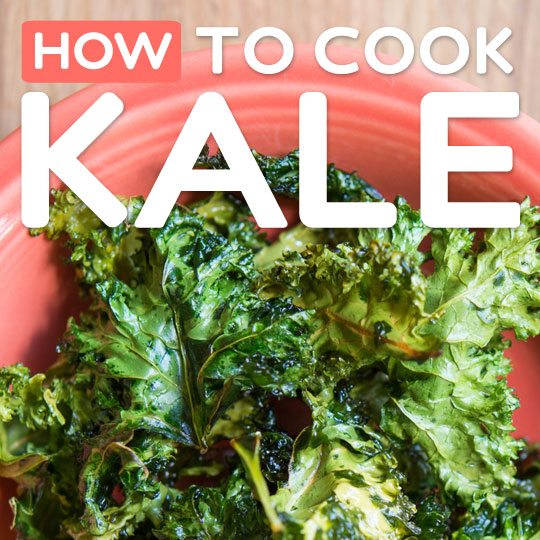 In the Produce Section
When looking at what kale to buy you’ll either be presented with only one kind, or a selection of kale, depending on the type and size of grocery store you’re in. Most of the recipes for kale that you’ll find online are for regular curly kale, and that is the type you’ll see for sale most often. It’s the most versatile and the kind that has a large margin for error, so you don’t have to stress too much while cooking it. You’ll also find baby kale, as well as a type of kale that might be listed as dinosaur kale. Those types of kale have thinner leaves and are not the type we’re covering here as far as cooking methods go.

Preparing the Kale
It’s important to get your kale ready to be cooked, so you don’t want to just toss it into the pot or the pan without making sure it’s been properly prepared.

Washing
Even if you buy organic kale you’ll still want to make sure that you wash your kale thoroughly. Hold it under cold running water and use your fingers to rub all part of the kale, including both sides of the leaves. This makes sure that you don’t end up with any dirt or other residue that might have made it onto the kale during shipping and while it was sitting in the grocery store waiting to be bought.

Removing the Stems
You’ll want to remove the stems before you cook and eat kale. They’re rather tough and stringy and are hard to chew up as well as hard to digest. You can do this rather quickly and easily be just grabbing hold of the stem with one hand, and with your other hand you grab the kale and tug it right off of the main stem.

Preferred Cooking Methods
Cooking kale can be tricky because you don’t want to overdo it and lose out on a lot of vitamins and minerals. At the same time you don’t want to undercook it and have it be a tough, crunchy mess. Get it just right and you’ll see what all of the fuss is about this Wonder-Veggie. Here are some of the most popular ways to cook kale, along with tips on how to get it right.

Steaming
Steaming your kale is a good way to soften it up without overcooking it and retaining a good portion of its nutrients. Just be sure to keep an eye on it and don’t let it get soggy. This is easiest to do with an actual steamer made for steaming vegetables, but you can also do with a pot with a lid and a little bit of water on the bottom.

Baking
When you bake kale you’ll end up with kale chips, which are one of the most popular diet snacks going on right now. The consistency of the kale changes and you end up with a crunchy chip-like snack that you can enjoy right out of the oven. Most kale chip recipes involve washing and drying the kale, coating it in olive oil, and dusting it with your choices of spices and flavorings. Pop in in the oven and bake for about 20 minutes or so and you end up with a nutritious snack without the fat and calories.

Boiling
Boiling kale requires checking on it consistently to make sure that you don’t boil it too long. If you do you’ll end up with a soppy squishy mess that isn’t very palatable. Just like with other cooking methods, you want to stop the cooking process when the kale is softened without going mushy. Mushy kale is one of the reasons why it’s gotten a bad name in the taste department.

Sauteing
This is one of our favorite ways of cooking kale, because it softens it up, gives it some extra flavor, but doesn’t cook it to the point where it wilts up and loses a lot of its nutrition value. Take an ordinary non-stick frying pan, add a little olive oil to it, and then add in your kale. Keep stirring it to avoid it getting wilted, and remove it from heat when you see that it has softened up. You can even taste a few pieces to know it’s just right.

Keep it Raw
You don’t actually have to cook kale in order to enjoy it. Popular kale salad recipes call for the call to be raw, and there are hundreds of green smoothie recipes that feature kale in raw form. In these instances you want to be sure that it is washed properly, and that you’ve removed the stems completely so you don’t end up with a bunch of hard-to-eat kale.

Cooking kale is not very hard, and once you figure out the way you like it best you’ll be able to whip it up in a jiffy to support any main dish you might be having. The great thing about kale is that it provides instant nutrition to any meal, and rounds off a meat dish nicely with its added fiber as well as its vitamin and mineral count.