Don’t believe everything you hear from mainstream nutrition. A lot of it is the best guess of the moment, and much of it gets proven wrong over time. Here are some of the biggest whoppers over the last few decades, many of which are still in place today. 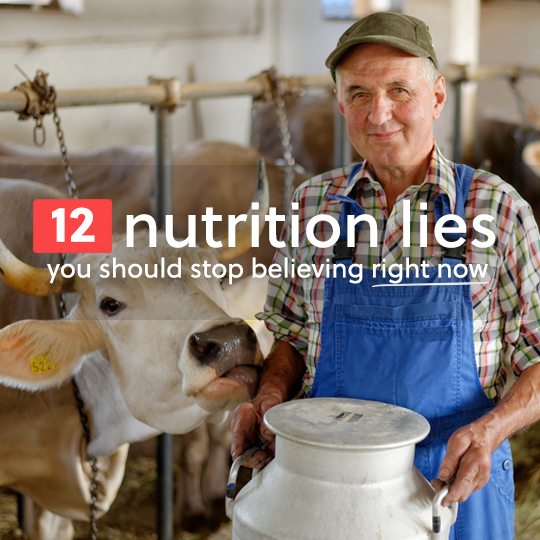 1. Calories Are The Enemy

Counting calories is still a regularly recommended way to diet, and some of the most popular diet plans in America use calorie counting in some format as the basis for how they work.

While a reduced calorie diet may provide short term results, the effects are generally short-lived, and as soon as the diet returns to its previous caloric intake, the weight is regained, and often additional weight is put on.

[color-box color=”main”]The Actual Truth: Not all calories are created equally, and blindly counting calories can also limit the amount of nutrients your body needs and could get from wholesome foods. Counting and restricting calories as a form of dieting has a high rate of failure, and is one of the biggest contributors to dangerous yo-yo dieting.[/color-box]

2. Margarine is Healthier Than Butter

When margarine hit stores it was touted as a healthier alternative to butter, and coincided with the low-fat diet boom.

As more was learned about the danger of trans fat and hydrogenated and partially hydrogenated oils, margarine manufacturers scrambled to replace these ingredients to appease consumers.

Today’s best-selling margarine brands have opted out of the hydrogenated oils, but are still mostly made with vegetable oil, most probably from vegetables that contain GMO’s.

[color-box color=”main”]The Actual Truth: Organic, grass-fed butter and ghee are much healthier options than margarine, which used to be made with hydrogenated oils, but are now made with vegetable oil.[/color-box] 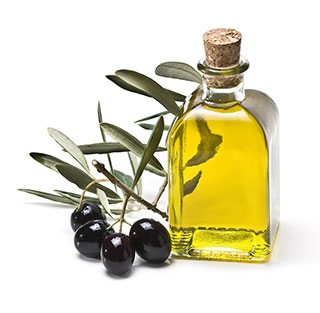 “Don’t eat fat and you won’t be fat.” This was was the simple and seemingly logical idea behind the low-fat diet craze. Low-fat and fat-free food options were everywhere in the late 80’s and 90’s and you can still see traces of this belief in today’s grocery stores.

Modern health circles are still unraveling the many different types of fat, and determining which ones are good for the body, and which ones aren’t, as well as how much of each type of fat you should and shouldn’t be getting.

[color-box color=”main”]The Actual Truth: Just as with calories, not all fat is the same. Making the distinction between healthy and unhealthy fats is key. Increasing your healthy fat intake can help you lose fat and have more energy throughout the day.[/color-box]

Diet colas are still being sold today, and new versions are constantly being marketed as having the same flavor as the original but with zero, one, or even ten calories. This is part of the low-calorie diet craze that still lingers on today, and may have dangerous repercussions.

The aspartame used in many diet sodas, and the other artificial sweeteners used in the rest are all unnatural, and work specifically to override the brain’s sweetness receptors and fool you into thinking that they taste sweet and good.

[color-box color=”main”]The Actual Truth: While the FDA stands firm that there isn’t enough evidence to pull aspartame from the market, are you willing to risk your health for a few less calories?[/color-box] 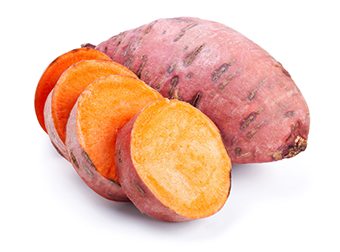 5. Carbs Are The Enemy

The Atkins Diet sparked the low-carb diet trend which still has a strong following today. The idea is that if you reduce the amount of carbs you eat to a minimum you’ll put the body in a ketogenic state and spur on fat burning.

The reason the diet enjoyed such a strong run is that it does produce results. Cutting carbs and eating mostly meats and vegetables will cause most who try it to lose weight, at least in the short term. This is mostly due to cutting out bad carb choices like sodas, white breads, white pasta, and others, and not because of the carbs themselves.

[color-box color=”main”]The Actual Truth: There are carbs that don’t help you out much, and others that do, so you don’t want to throw the good out with the bad. Slow carbs are low on the glycemic index and can provide you with sustained energy and keep you feeling full longer.[/color-box]

Think a tall glass of milk “does the body good”? Think again. It’s interesting that milk gets its own category on the USDA’s MyPyramid despite the fact that there are cultures in the world that consume little to no dairy yet remain vibrant and healthy as a whole.

Any time there’s a giant marketing push to convince the public that a specific food item is healthy, red flags should go off. The “Got milk?” campaign was a huge success for dairy farmers, but did it actually help out the end users that increased milk consumption?

[color-box color=”main”]The Actual Truth: A glass of organic, grass-fed, non-homogenized milk may have some health benefits to it in the form of omega-3s and CLA, but the conventional milk sold in most stores is full of growth hormones, antibiotics, and fortified with synthetic vitamins.[/color-box] 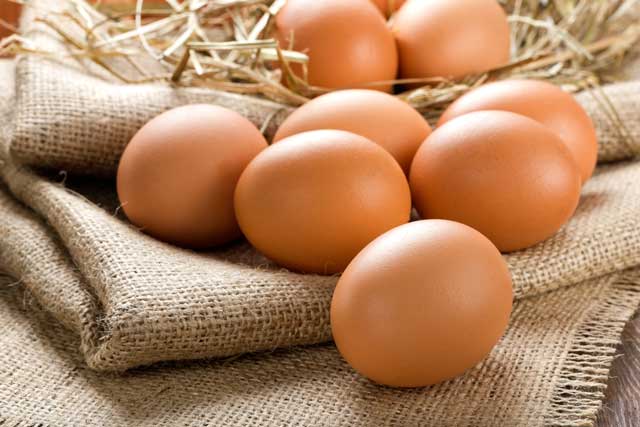 7. Eggs Aren’t Good for You

Are they or aren’t they? Should you eat just the whites and leave the yolk alone? The great egg debate rages on today in the health food world. All the hoopla is caused by the low-fat diet boom of the 80’s. Eggs got a bad wrap because they were viewed as high in fat and cholesterol.

We’ve learned a lot in the past two decades, that there are good fats and bad fats and good types of cholesterol as well as bad. Now many nutritionists are recommending eggs as part of a healthy diet, and even as a way to increase levels of good cholesterol.

[color-box color=”main”]The Actual Truth: Organic eggs from pasture-raised hens offer many health benefits, and you may eat the entire egg.[/color-box] 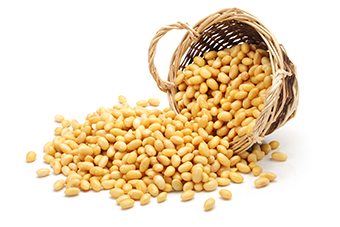 8. Soy Is a Healthy Choice

For years soy-based foods were pitched as health food, but more and more studies are showing that it may not be very good for you at all.

On the surface soybeans appear that they would provide healthy benefits, thanks to their protein and fiber levels. Tofu has long been viewed as a healthier alternative to meat for vegetarians. But studies have emerged that show a link to breast cancer, as well as thyroid and prostate issues.

[color-box color=”main”]The Actual Truth: Soybeans may have some benefits, but they also have enough working against them to make them questionable when it comes to a health food.[/color-box]

9. Grains Are Great for You

Perhaps not coincidentally, the two biggest parts of MyPyramid are grains and dairy, two questionable food categories that may do more to inhibit your health than foster it, which happen to be two of the bigger food industries in America.

[color-box color=”main”]The Actual Truth: Organic grains can play a part in a healthy diet, but should not form the foundation.[/color-box]

10. Diet Foods Are Good for You

You decide to lose some weight so the first thing you do is head to the store and load up on diet foods. You find all sorts of lite, fat-free, and low-calorie options and head home optimistic that you’re on the right path.

But after weeks of switching to diet foods you’re still not losing weight, and in fact you could have gained a few pounds. This is because these foods are often loaded with chemicals that cause inflammation.

11. Pork is The Other White Meat

For years pork was billed as “the other white meat” in an attempt to get consumers to eat it alongside chicken and turkey. The idea was that pork could be considered a healthier option than beef, and be on par with chicken when it came to nutrition.

The ads worked, but unfortunately they were anything but accurate. Conventionally raised pigs are kept packed in tight containers and will eat anything that they come across, including their own droppings. They are then given antibiotics to keep them from getting sick, and growth hormones to speed along the process so that more money can be made.

[color-box color=”main”]The Actual Truth: Pork is one of the most bacteria-laden meats you can eat, thanks to the conditions pigs live in, and their nondiscriminatory diet.[/color-box]

12. Conventional Fruits and Vegetables Are Good for You

If you think that cart full of fruits and vegetables will nourish you and help you lose weight, you may want to think again.

Organic produce starts with a non-genetically modified seed, which is planted in soil that contains no herbicides or pesticides, nor are any chemicals used during the growing process. At first it was believed that these fruits and vegetables contained more nutrients, but you’re buying them for what they don’t contain, and all of the things that they’re free of.

[color-box color=”main”]The Actual Truth: Conventional produce is full of pesticides and herbicides, and has been genetically modified in many cases. This fills your body with foreign substances and toxins that get lodged in the body and causes any number of diseases and symptoms.[/color-box]