If ever there was proof that a particular diet and lifestyle was the winning ticket to good health, people in a certain community living longer than the world average would be it. And with Japanese people more likely to reach 100 than anyone else on the planet, that’s a good place to start looking for the key to a healthy lifestyle. Researchers attribute their longevity and health to their diet, which comprises of rich and fresh unprocessed foods… 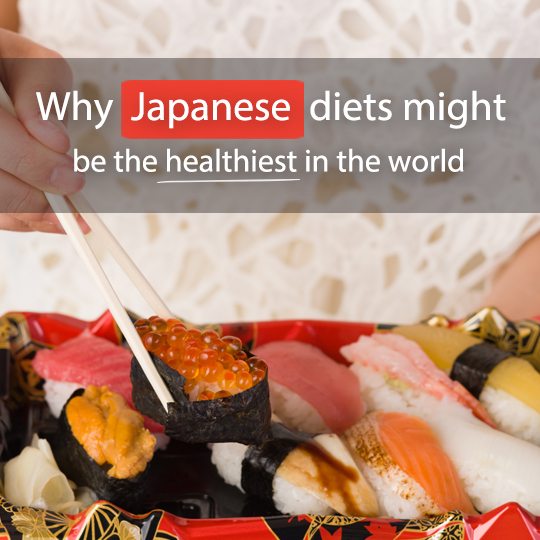 Benefits Of A Japanese Diet

You probably associate sushi with Japanese food. However, the sushi rolls you would most likely be familiar with have actually been heavily influenced by other cultures over the years, and don’t necessarily resemble the original cuisine entirely. There is a lot more to Japanese dining than sushi, and traditional Japanese diets are rich in vegetables, fresh fish, fruits, rice and tofu. 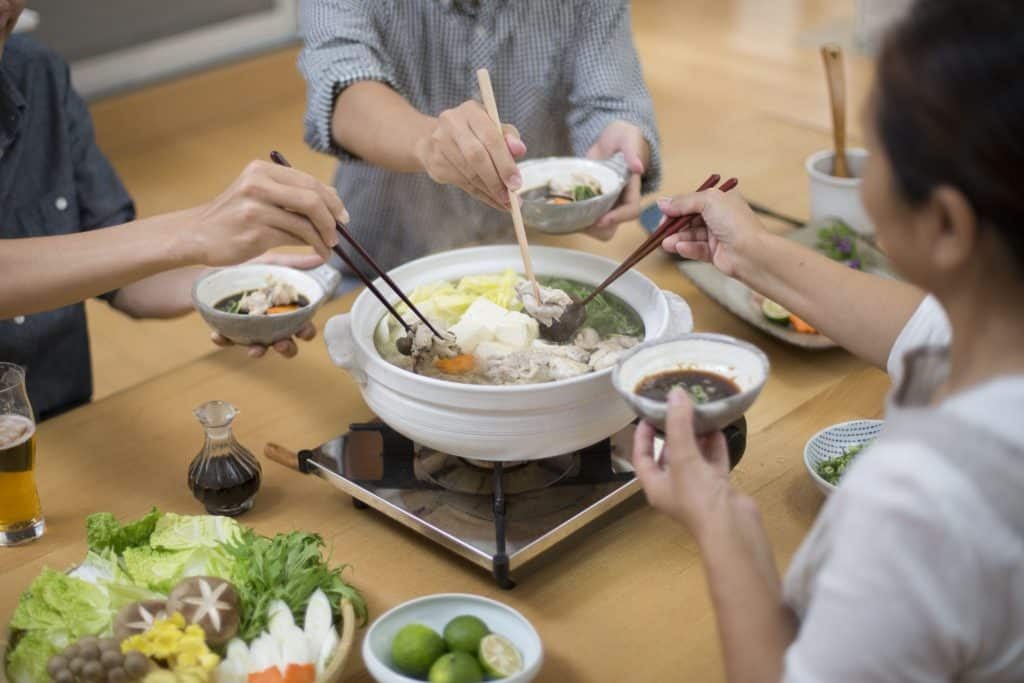 The average life expectancy of Japanese men and women is around five years more than the average American. Japanese women can expect to live for 87 years and men for 80, while American women average at 81 and men at 76. Not only that, but Japanese people can also expect an average of 75 healthy, disability-free years, according to the World Health Organization. Japan has the lowest obesity rate in the developed world at just 3.6%, compared to 32% in the US. And it’s not all down to their genes, as some people might like to argue – Japanese people, just like Caucasians and people from all over the world, can put on weight fast when they adopt a Western-style diet. 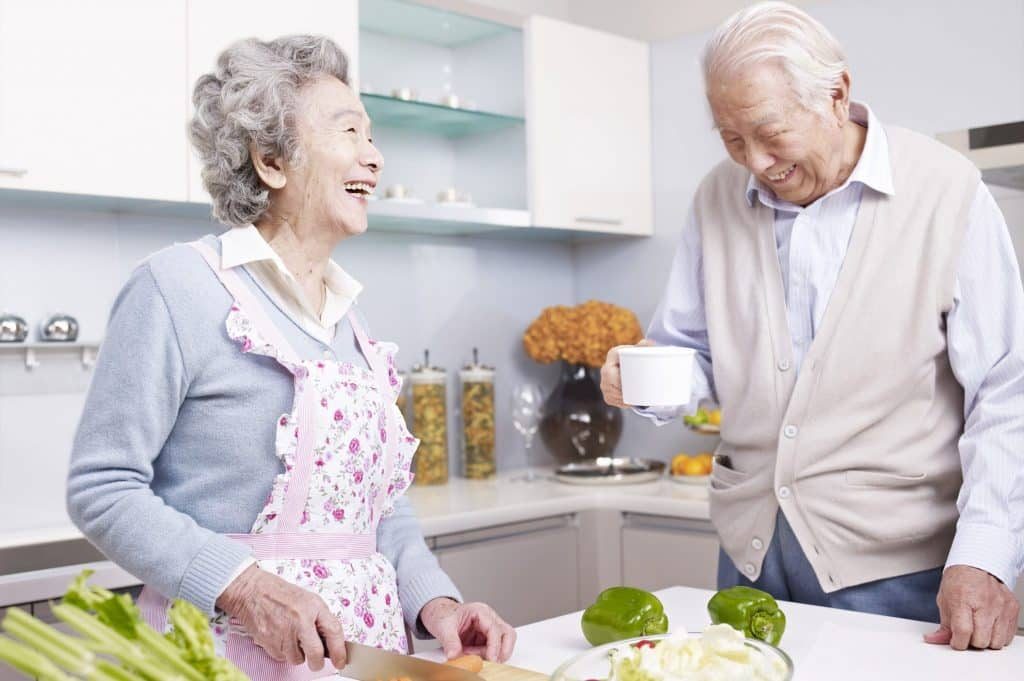 There have been a number of diets and trends from Japan that have taken the world by storm at different times. They each have their own health benefits, but they have also been misinterpreted and misused on some occasions… 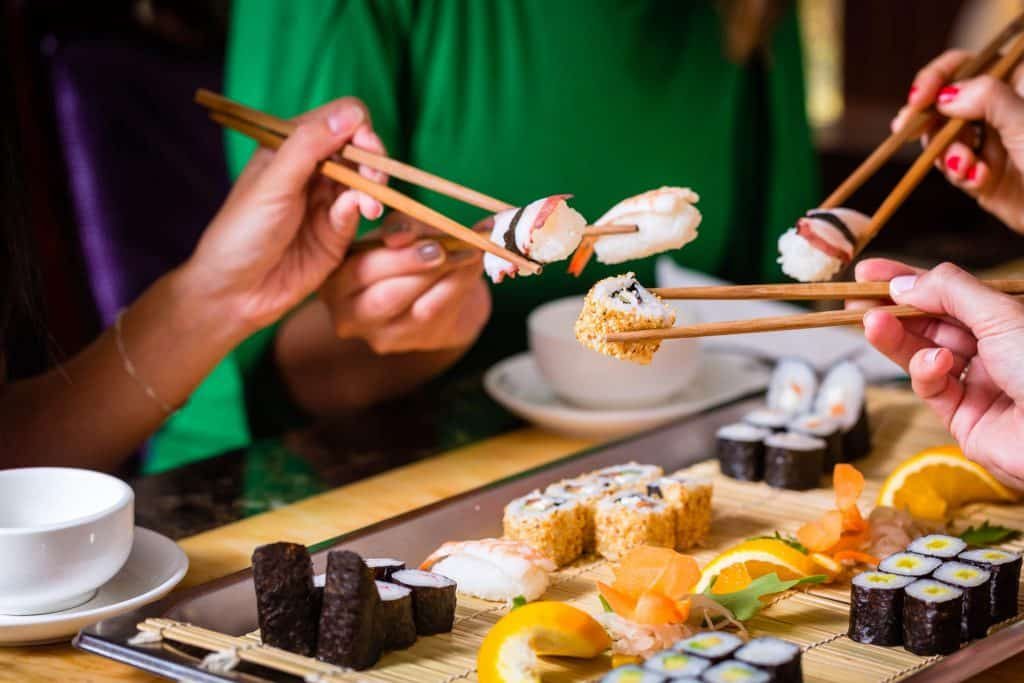 A few years ago, the southern Japanese Okinawa islands were in the spotlight for having the largest proportion of centenarians in the world. It is believed that genetics played a role in their longevity, but with further research, it was concluded that their diet was a big part of their ongoing health.

Okinawan food is simple, natural, locally grown and fresh, and their cooking and farming methods have been passed down from their ancestors over centuries. Okinawan kitchen staples include rice, tofu, bamboo shoots, pickles, fruits, pork, vegetables and seaweed. But perhaps what they are best known for is a local purple sweet potato, rich in vitamin E, carotenoids and other powerful nutrients. 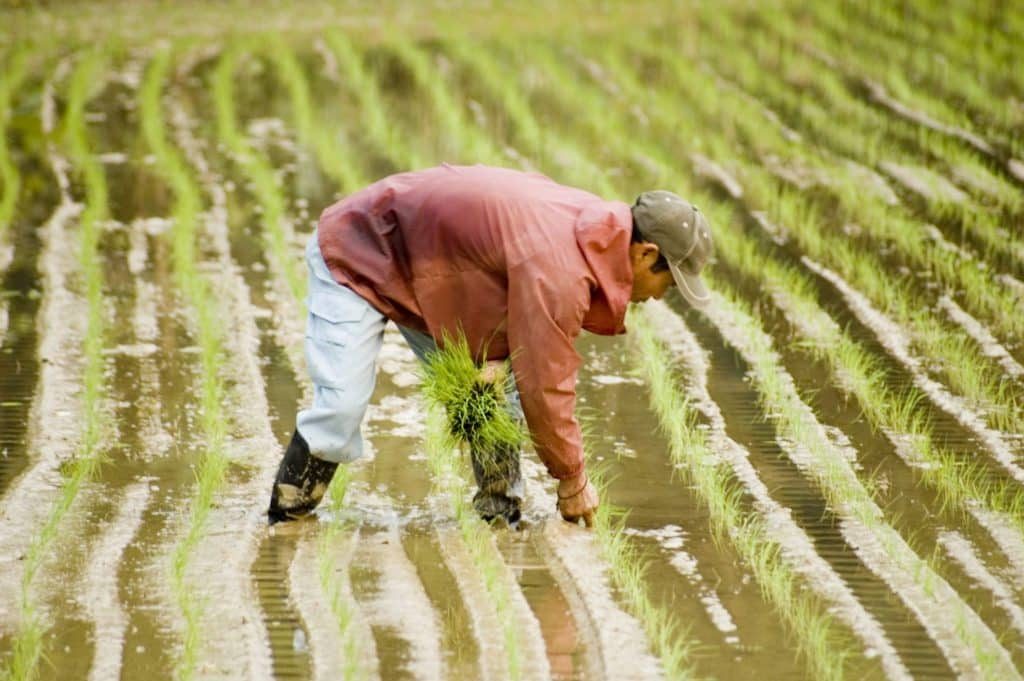 This discovery of centenarians led to a fad called the Okinawa Diet, which became an eating plan for people in the Western world who wanted to lose weight or live longer. The traditional diet includes about 30% green and yellow vegetables, a tiny piece of fish (less than half a serving per day), and a larger intake of soy and legumes. Meat and fish consumption is extremely low, and legumes, soy and vegetables play a larger role in each meal. They consume about 30% of the sugar and 15% of the grains of the average Japanese person. In fact, the Okinawan diet is about 20% lower in calories than the average Japanese diet, while being extremely high in antioxidant-rich food.

Sushi is an ancient food, and, unsurprisingly, it is therefore shrouded in mystery and folklore. It is believed to have originated in Southeast Asia during the second century A.D., as a means of keeping meat fresh without refrigeration. Meat and fish was cured and wrapped in rice to preserve it. Back then, it is understood that the rice was actually thrown away, and the cured product inside was eaten. Around the 8th century in Japan, people began eating the whole roll, including the rice, which coincided with Buddhism spreading across the country. The Buddhist diet meant people abstained from meat, and replaced it with fish as a staple food. 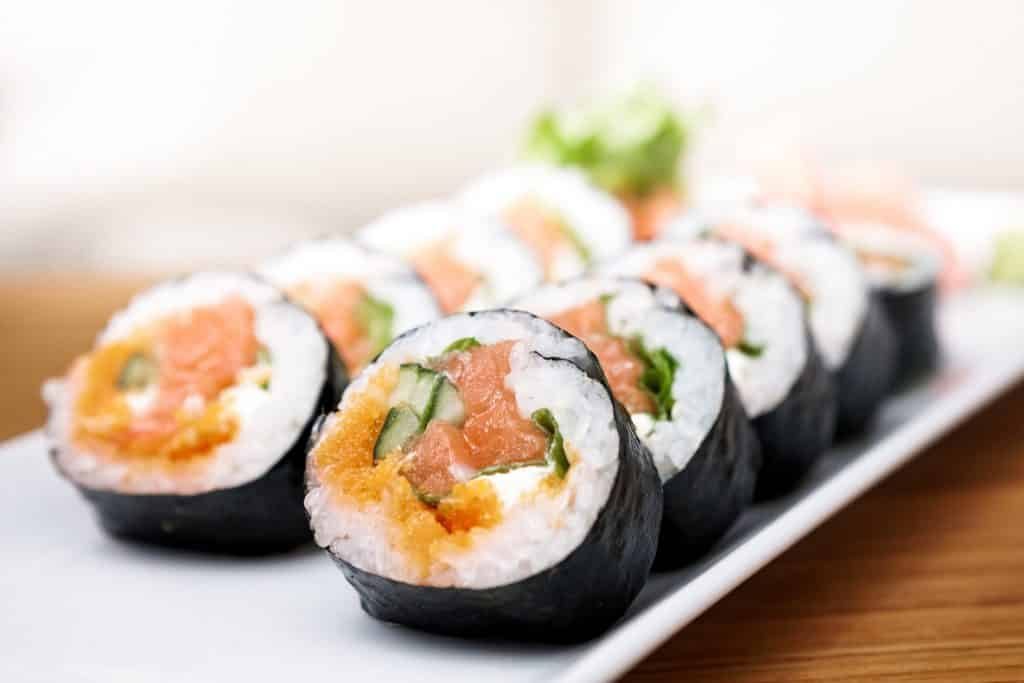 The practice of making sushi changed significantly over time, until the early 1800s when the process took few minutes, instead of a few months, as the early fermentation process of sushi making had taken. In the 1970s, sushi expanded around Japan, and in 1966, the first sushi restaurant opened in the United States – Kawafuku Restaurant in Little Tokyo, Los Angeles. That was followed in 1970 by a sushi restaurant opening in Hollywood and catering to celebrities, which, of course, advanced sushi onto center stage in America. Traditional nigari sushi is still served in Japanese restaurants around the world, but the cuisine is constantly evolving. Wrapping the rolls in seaweed or soy paper is a modern method that has been added, and there are, of course, less healthy sushi options now, like cream cheese filling or deep-fried, as well as vegetarian options. 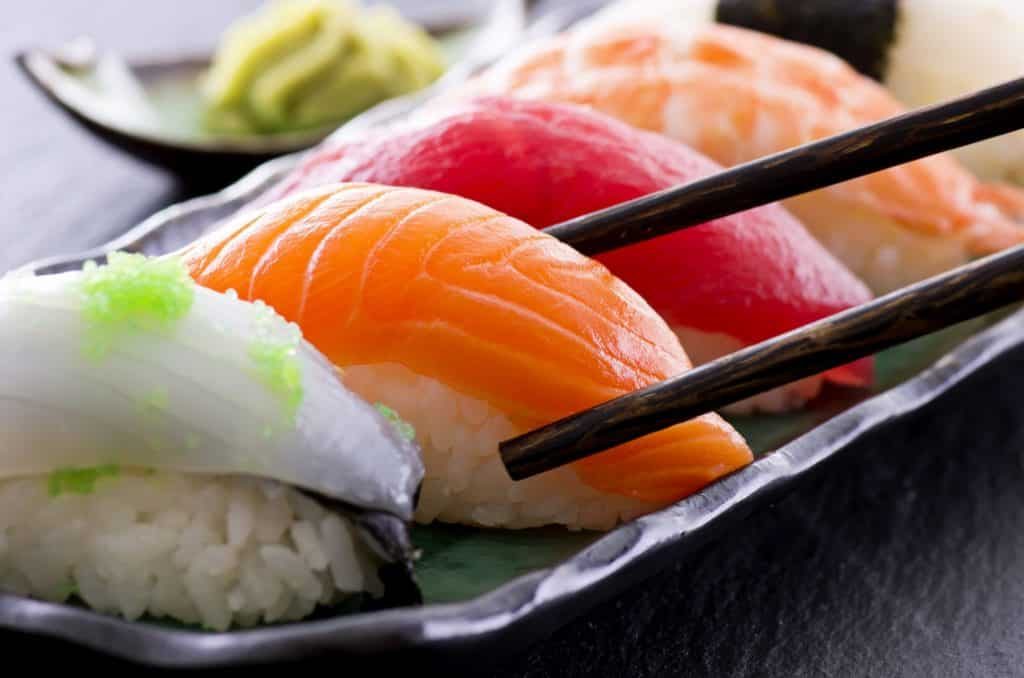 There are a couple of things you need to know about sushi when treating it as a healthy food option. The first being, fresh, natural fish is one of the healthiest foods on the planet. Quality traditional sushi rolls with raw or seared fish and a small casing of rice and seaweed certainly have plenty of health benefits. Fresh fish is full of protein and vitamin D, and it is loaded with omega-3 fatty acids, which is a crucial nutrient for brain function and physical health. The second, however, is that modern sushi rolls are packed full of short grain white rice, which can spike blood sugar levels. And if you don’t like fish, and order a cheap chicken or cream cheese sushi roll, you might as well call it fast food. 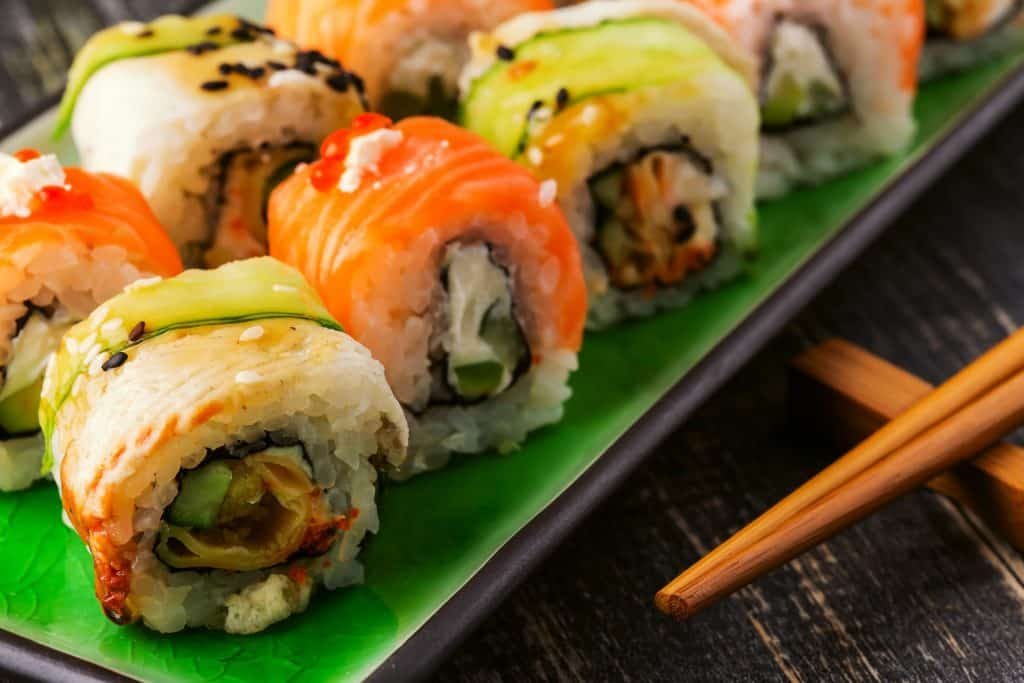 Although it only hit the headlines within the last year or so, matcha tea is another ancient staple of Japan that has been consumed for centuries. This powerful powder provides more than double the antioxidants of regular green tea, and has an exorbitant number of health benefits. The bright green powder can be stirred into hot water and consumed entirely, unlike other teas, where the tea leaves are left behind. It has also become popular to include a teaspoon of the powder in smoothies and dessert recipes, like raw protein balls. 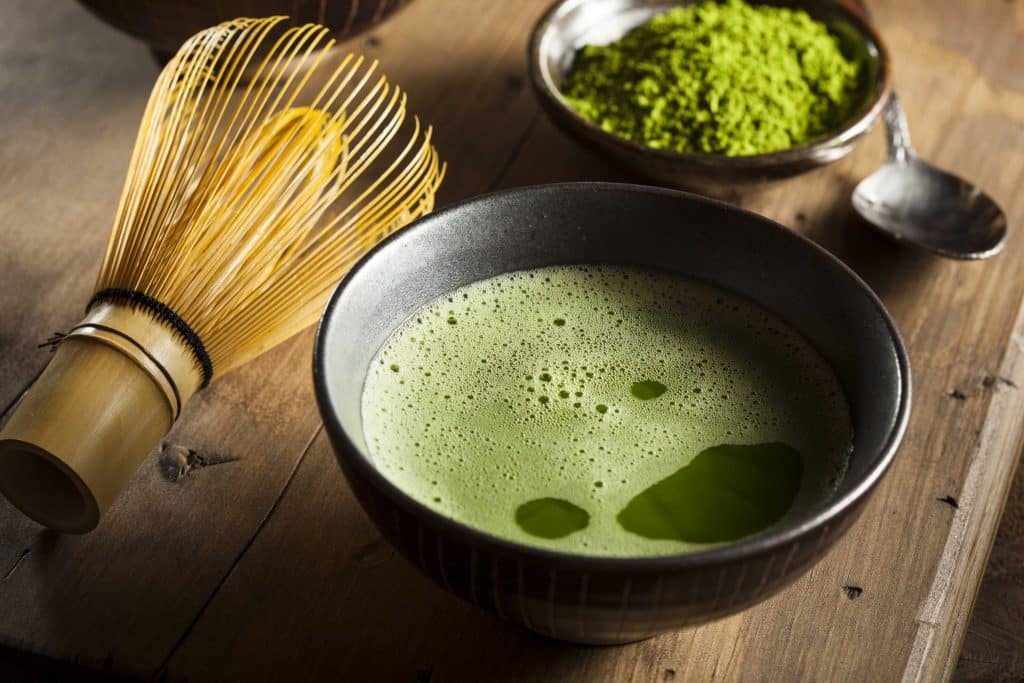 Like many healthy cultures around the world, including Ayurvedic and Chinese, the custom of dining in Japan comes with some traditions that have their fair share of health benefits…

Eat With Your Eyes

If you’ve ever been to a Japanese restaurant, you probably would have marveled at the attractive presentation of the food, served in small portions and on little dishes and plates. This lower-calorie way of eating with perfect portion control enables you to enjoy your food before you even start to eat it. Without even realizing it, you will automatically slow down your eating and enjoy the experience, giving yourself time to realize when you are full. 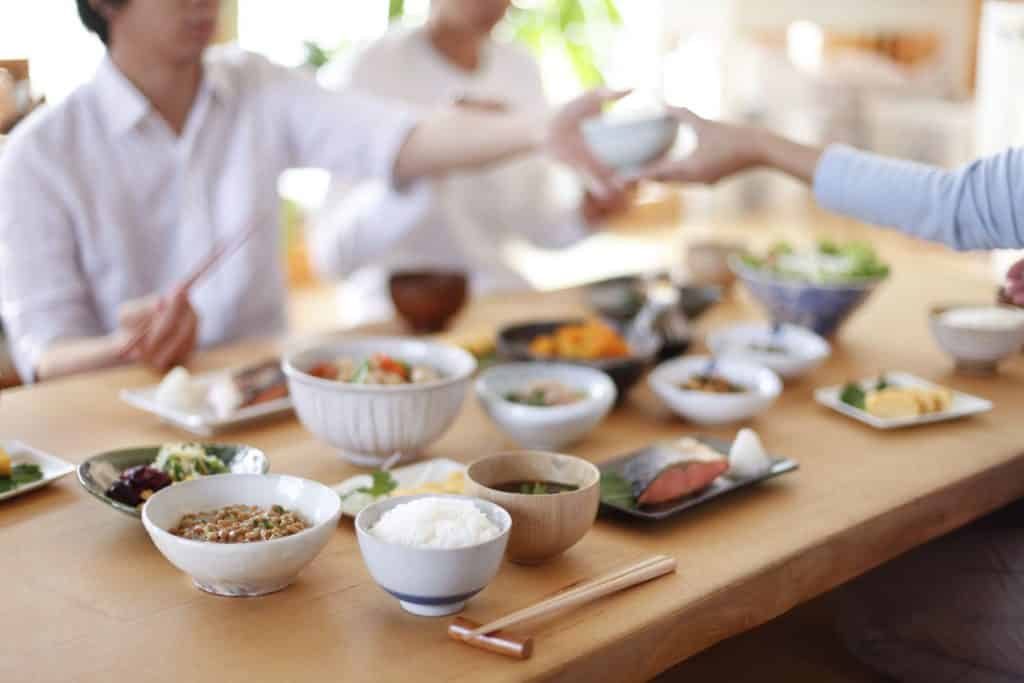 Vegetables should be exciting – not a necessary afterthought as has become the norm in the Western world over the decades. Traditional Japanese cuisine celebrates vegetables and turns them into rainbow-colored masterpieces in every meal. Red and green peppers, beans, zucchini, eggplant, tomatoes, lettuce, carrots, spinach, bamboo shoots, onions, beets, turnips, radishes, shiitake mushrooms, sweet potato and seaweed are just some of the staple veggies enjoyed by Japanese diners. Vegetables appear in breakfast, lunch and dinner meals, in everything from soups and broths to salads, stir-fries and steamed sides. 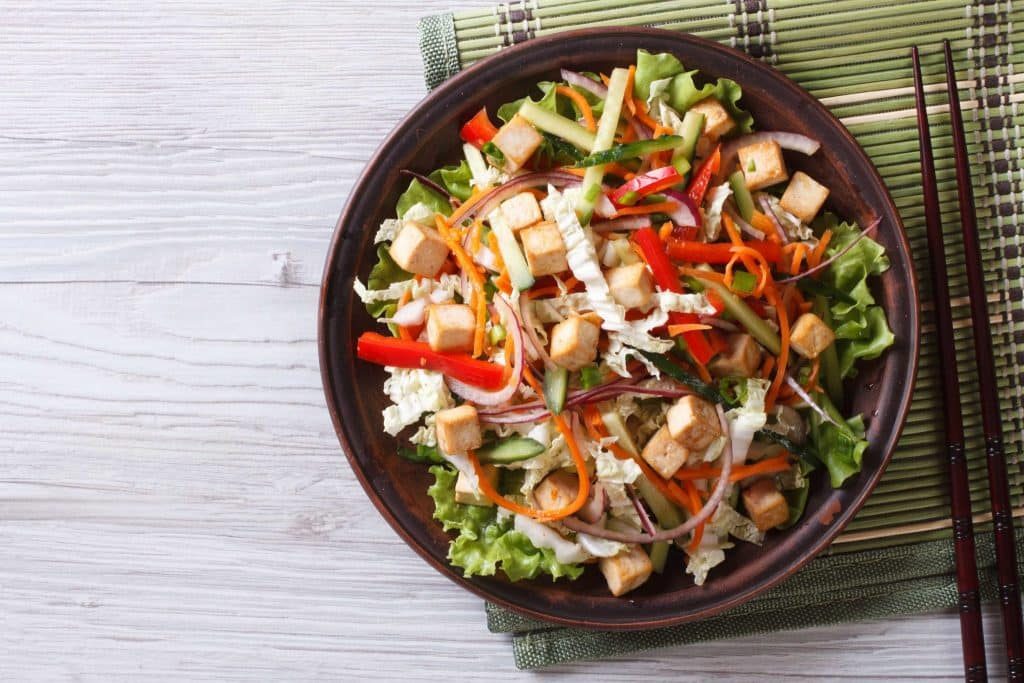 Fish is an extremely central part of a traditional Japanese diet, but meals aren’t dominated by meat or fish – they are a small part of the overall meal. With that in mind, it is easier to afford good quality, fresh and healthy fish, because you don’t have to buy pounds of the stuff. Some Japanese favorites include salmon, tuna, sardines and mackerel – all of which are packed full of omega-3 fatty acids. Because Japanese diets are so rich in fish, they are very low in red meat, which is something many Americans get too much of. 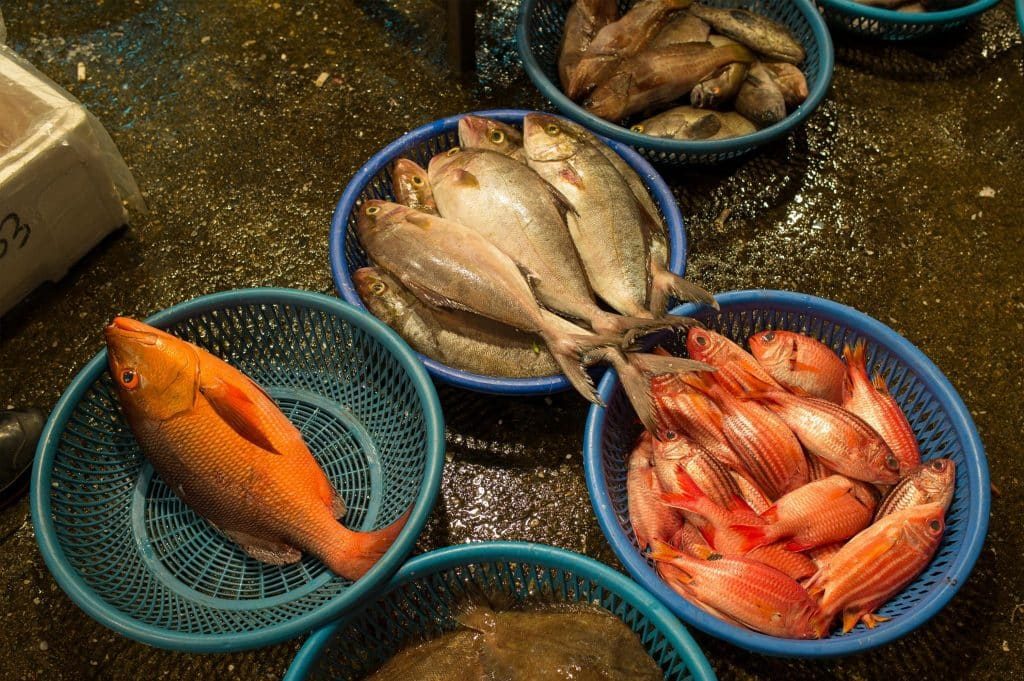 Although soy products have had their fair share of negative publicity in recent times, they can be extremely beneficial when eaten in moderation – especially if you’re not eating red meat. Natural soy products like tofu and edamame beans are full of protein, but without the saturated fat you’d find in red meat. 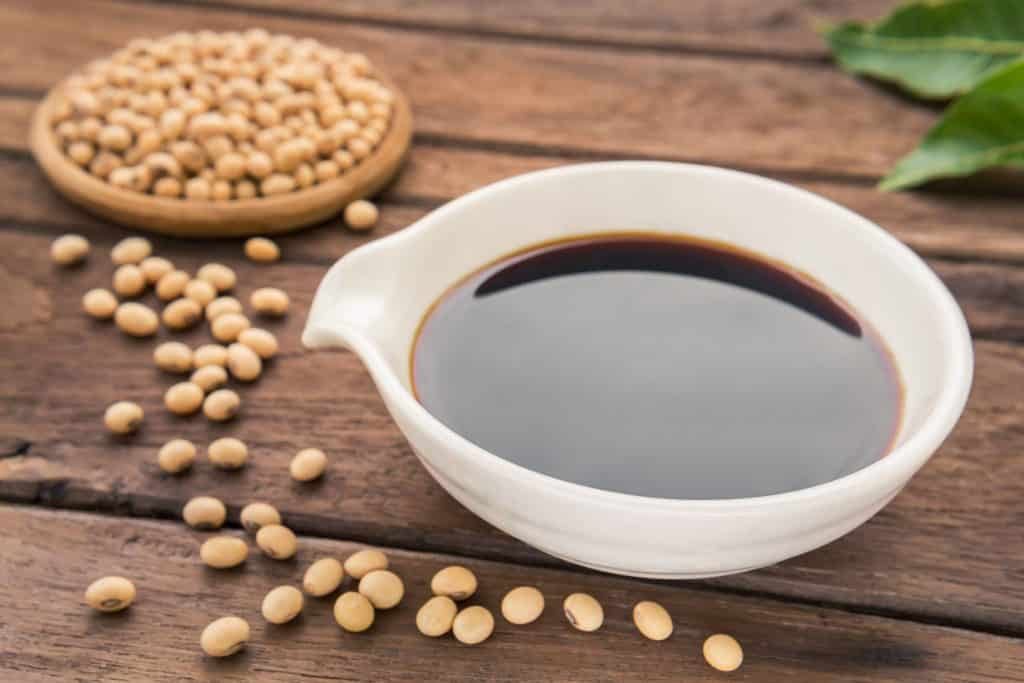 Homemade Sushi – We’ll start with this one because, let’s face it, it’s probably what you’ve scrolled down the page for! Every sushi lover wants to master the art of creating the perfect roll that won’t fall to pieces when you pick it up with your chopsticks (or fingers)! This excellently explained step-by-step guide will get you over the line after a bit of practice, and you will be sure to impress your guests at future dinner parties. 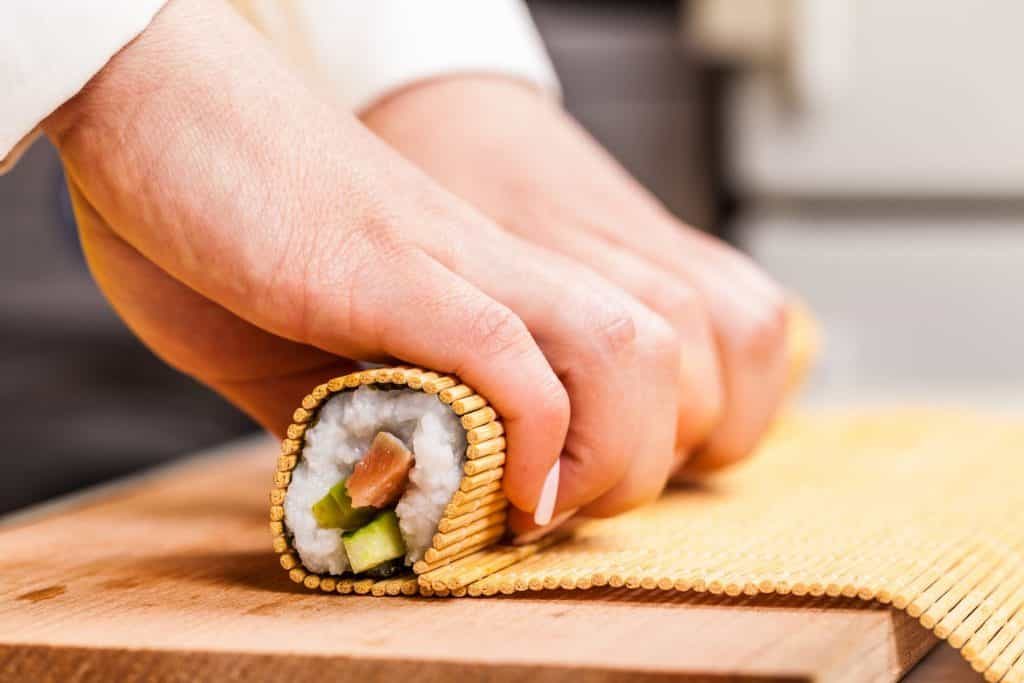 Spicy Tofu Sushi Bowl – If you can’t be bothered fiddling around with homemade sushi or want to change it up a bit, try this sushi bowl instead. It has (pretty much) all the same nutritious ingredients, without all the rolling. This sushi bowl features cauliflower rice, which is a great option for people cutting back on carbs. It also has some Japanese favorites, including seaweed and pickled ginger.

Miso Soup For Beginners – One of the most well-known and traditional of Japanese recipes is miso soup – often served as a starter in Japanese restaurants. Miso is a paste made from fermented soy beans and this soup is a broth made from that paste, along with some other ingredients, including tofu, seaweed, noodles and shiitake mushrooms. 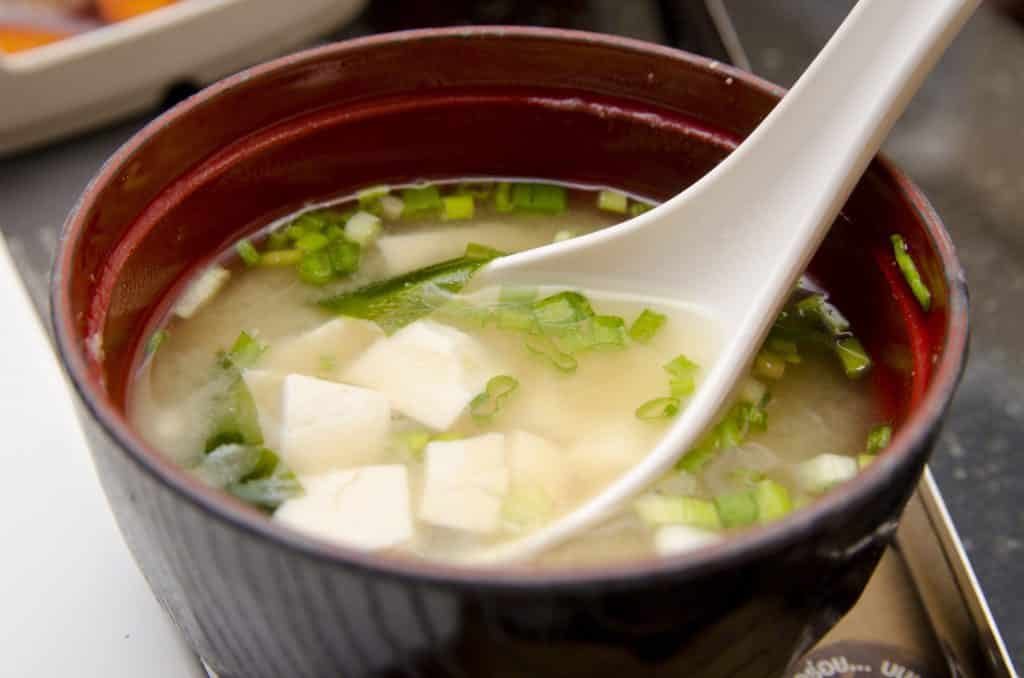 Okinawan Stir Fry With Bitter Melon, Sweet Potatoes And Turmeric Poached Eggs – We had to include a couple of Okinawan recipes in our list, and this one includes their famous purple sweet potato! Packed with nutrient-rich ingredients, including turmeric and bitter melon, as well as protein-rich eggs and tofu, this quick, easy stir fry is a great one to add to your list when bitter melon is in season.

Sweet Potato Soup With Curry Portabellas – This creamy gluten-free soup is yet another quick and easy creation that is packed with flavorful, wholesome ingredients. This one also features the purple Okinawan sweet potato to make for a beautiful colored dish!

Matcha Latte – We’ve already gone over the powerful health benefits of matcha powder. This latte recipe is delicious and creamy, and makes the perfect morning alternative to coffee if you’re trying to cut back on caffeine. The warming and energy-boosting drink is full of antioxidants and will start your day on a positive note! 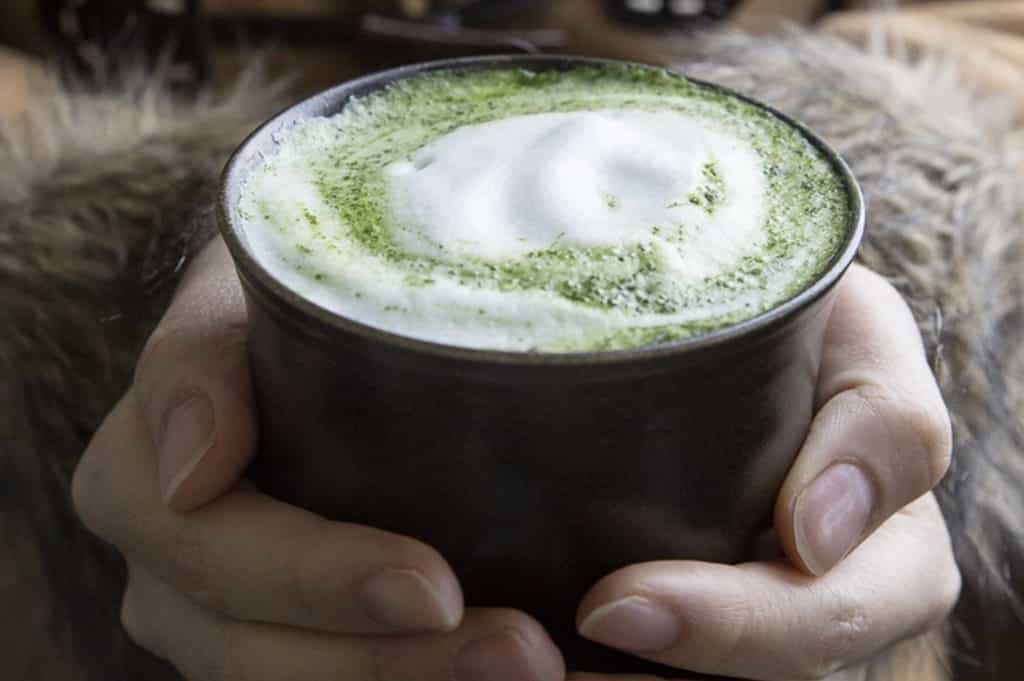 Matcha Green Tea Smoothie With Peaches – Sticking with the matcha tea (because it is so good!), this fruity smoothie offers a different take on the green powder, and it’s a great option for summer when a warming latte might not seem so appealing. Not only does it have tasty matcha and peaches, but it also features spinach, banana and pistachios for the ultimate healthy booster.

All The Best Health Reasons To Eat Spicy Food